What is a red tide?

In simplest terms, a red tide is a "bloom” of phytoplankton. Phytoplankton are microscopic, single-celled plants that occur naturally in our coastal waters. A “bloom” occurs when a particular species of phytoplankton begins reproducing rapidly, resulting in millions of cells in each gallon of water. Not all phytoplankton species produce visible blooms. Red tides are caused by a particular group of phytoplankton called dinoflagellates, which seem to prefer warmer and calmer waters.

What causes the color in red tides?

The phytoplankton cells that cause a red tide contain pigments for capturing sunlight needed for cell nourishment, growth, and reproduction. These pigments can give off a reddish color when millions of cells are concentrated in each gallon of seawater along our coast. If you were to look at just one of these cells under a microscope it might actually have a golden-brown color. 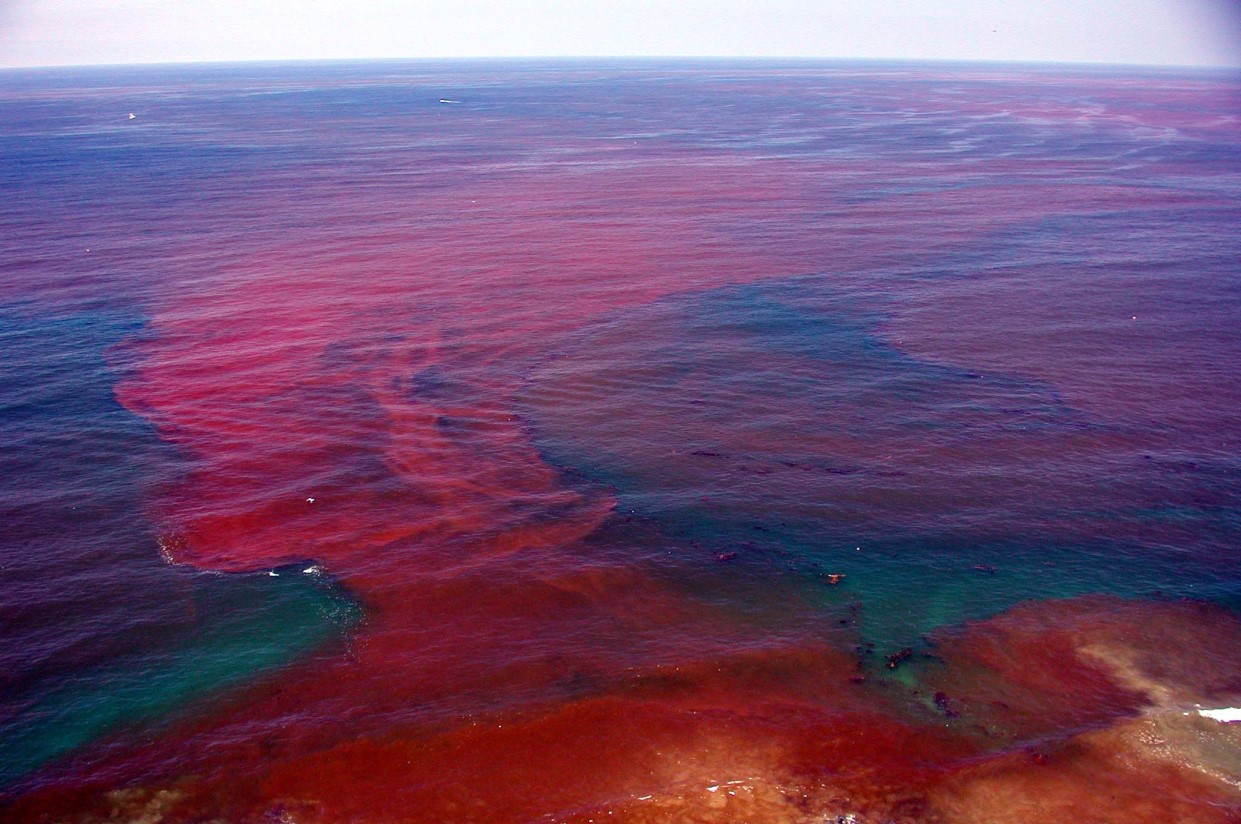 Red tides can actually take on the appearance of a variety of colors—from brown to burgundy, to bright red, and even yellow in some parts of the world. The color of a bloom depends on which phytoplankton species is blooming, along with other factors such as light intensity and the angle of the sun shining on the water.

Where do red tides occur?

Red tides occur all over the world—from tropical regions to Alaska. In California the most frequent observations of red tides occur between Santa Barbara and San Diego.

When do red tides occur? 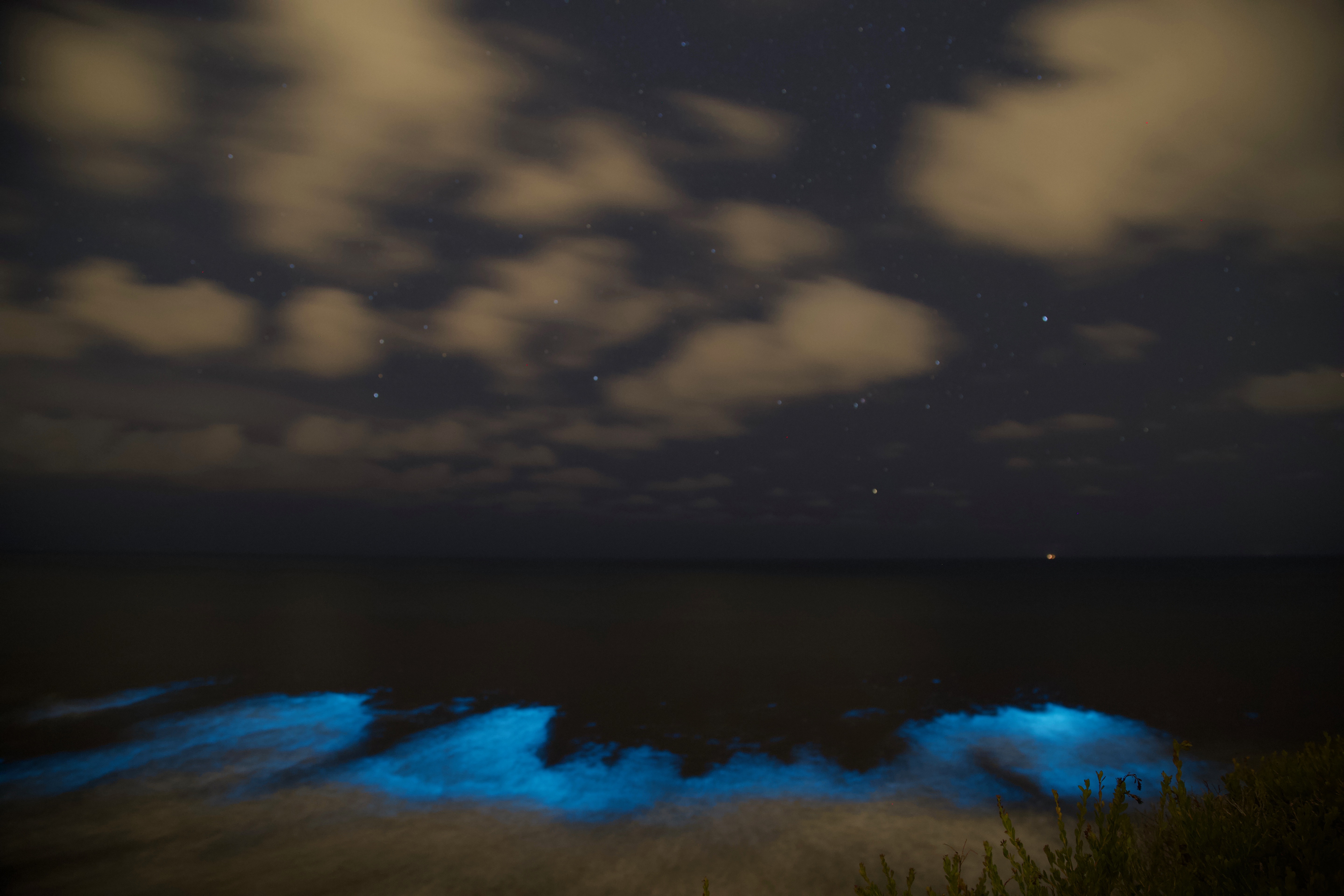 How long does a red tide last?

Red tides can last from days to months. The length of time that a plankton bloom continues depends on many things, such as available nutrients and sunlight, water temperature, changes in wind or surf conditions, competition with other species, and grazing by zooplankton and small fish.

This is a controversial question lacking a simple answer. Red tides have occurred for thousands of years. Remember, these are blooms of microscopic algae that feed zooplankton, such as krill, and small fish like anchovy. In turn the zooplankton feed everything from fishes to sea lions to whales. Phytoplankton are the base of the ocean’s food web and their presence is both normal and essential.

Scientists are concerned, however, that there has been an increase in the number of blooms that occur each year, and that blooms, particularly toxic blooms, are occurring in parts of the world where they never occurred before. The increased red tide activity could be related to human activity, which has greatly increased the amount of nutrients that enter our coastal waters.

Are all red tides toxic?

In California the majority of red tides are not caused by species that produce deadly toxins such as domoic acid and the paralytic shellfish poisoning toxins. Sometimes, however, phytoplankton blooms are formed by toxin producers. Therefore it is best to be cautious and assume that a bloom is toxic until you can learn more. Also see the information below on the health hazards of red tides. 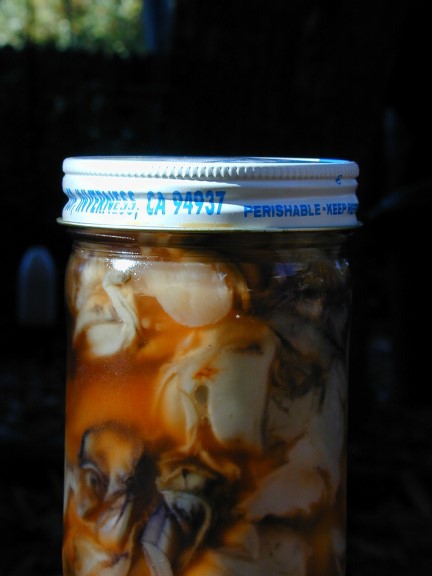 Jar of oysters that were harvested from a red tide. Photo: Gregg LangloisThe image at left is an example of a jar of shucked oysters that were harvested in the middle of a non-toxic red tide. The oysters were perfectly safe for consumption. Interestingly, the reddish-orange color from the dinoflagellates leached out into the water in the jar several hours after they were shucked. The ‘red tide in a jar” oysters were unsalable and over 10,000 jars needed to be discarded.

How do we know if a red tide is toxic?

Fortunately the California Department of Public Health (CDPH) has a volunteer-based program to monitor our coast for the presence of toxin-producing phytoplankton. CDPH also routinely monitors shellfish for the presence of these dangerous toxins thanks to the active participation of local county health departments, state and federal agencies, universities, and volunteers. By calling the Biotoxin Information Line (800-553-4133) you can get recorded information on current marine toxin health advisories and shellfish quarantines.

IMPORTANT: dangerous levels of toxins can concentrate in a variety of seafood (mussels, oysters, clams, crab and lobster viscera, anchovies) even though a visible bloom has not occurred! Call the Biotoxin Information Line (800-553-4133) for current health advisories.

What are the health hazards associated with a red tide?

Remember: this dangerous condition can occur even in the absence of a visible red tide. Nontoxic red tides in California have been reported to cause irritation of the eyes, mouth, and throat, as well as cold and flu-like symptoms. Even though most red tides do not produce toxins they do change the chemical composition of the seawater where they are occurring, which can affect humans that come in contact with a bloom.

Is seafood safe if there is not a red tide?

Seafood can still contain dangerous levels of marine toxins even if a red tide has not occurred. Always contact the Biotoxin Information Line (800-553-4133) to learn about current health advisories and quarantines before sport harvesting shellfish or catching and consuming crab, sardines, and anchovies.

What seafood is affected by these toxins?

Filter-feeding organisms like mussels, oysters, clams, and scallops can all accumulate dangerous levels of toxins produced by a few different phytoplankton species. These lethal nerve toxins can also accumulate in the viscera (guts) of crab, lobster, sardines, and anchovies.

How do I learn more about a current red tide along the California coast?

The California Department of Public Health maintains a toll-free phone number with recorded information on current seafood health advisories and quarantines. Call the Biotoxin Information Line at 1-800-553-4133 to hear this information or to leave a request for someone to contact you.

For information about the red tide in spring 2020, please see the following resources: