During certain types of harmful algal blooms, some wild-caught seafood like clams, mussels, scallops, lobsters, or crabs might make you sick if you don’t take appropriate precautions. Learn more about the types of microscopic algae behind this danger, when to take precautions, and how to eat at-risk seafood safely when a bloom occurs.

For information on the 2015-16 closure of the California Dungeness crab fishery, see Frequently Asked Questions: Domoic Acid in California Crabs. 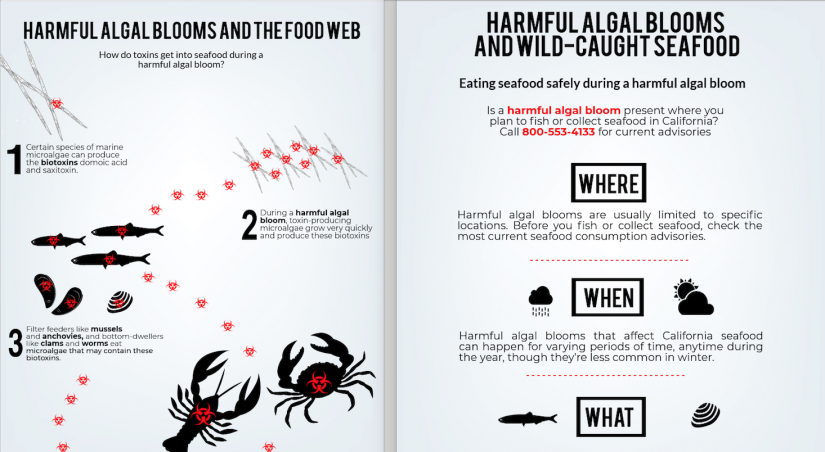 What are harmful algal blooms?

A harmful algal bloom occurs when certain species of microscopic algae, or phytoplankton, grow extremely rapidly and cause problems for people or aquatic life. Harmful algal blooms occur around the world, in freshwater as well as the ocean.

Are all algae (phytoplankton) harmful?
No, and even those species that can cause harmful algal blooms do not always do so. Phytoplankton provide oxygen and form the basis of the food web, supporting the whole ocean ecosystem. Like plants, phytoplankton grow and reproduce when they have the right combination of light, nutrients, and temperature. When they multiply rapidly, or bloom, however, certain phytoplankton are sometimes harmful.

Other harmful algal blooms can irritate skin or contribute to respiratory illness when a person comes in contact with them. These types of blooms have been particularly problematic in the Gulf of Mexico.

The harmful algal blooms we focus on here sometimes produce toxins that can be passed through the food web and accumulate in some species people commonly eat. These blooms have the potential to make people sick if the affected seafood is not handled appropriately.

Which harmful algal blooms can affect seafood in California?
There are two types of microalgae that sometimes affect certain wild-caught seafood and can harm humans (and other mammals): some Pseudo-nitzschia diatoms can produce the neurotoxin domoic acid, and some Alexandrium dinoflagellates can produce another neurotoxin called saxitoxin.

Domoic acid was first recognized in the late 1980s. Saxitoxin has a much longer documented history spanning more than 100 years. Saxitoxin is the reason for California’s annual mussel quarantine, which prohibits the recreational take of mussels along the coast from May 1 – Oct 31.

What happens if you eat contaminated seafood?
Domoic acid and saxitoxin both affect the nervous system. Domoic acid causes Amnesic Shellfish Poisoning (ASP). Symptoms of ASP include gastrointestinal upset and in more severe cases, neurological symptoms including headaches, dizziness, and disorientation, short-term memory loss, coma, and death. Saxitoxin causes Paralytic Shellfish Poisoning (PSP). Symptoms of PSP can include tingling and numbness in lips and tongue within minutes to a few hours, and may progress to numbness in fingers and toes, paralysis of arms and legs, and difficulty breathing which can result in death.

The severity of ASP and PSP depends on how much toxin is consumed and other individual factors, so it is important to seek medical attention if you experience these symptoms after consuming seafood or otherwise believe you have been exposed to contaminated seafood.

Have many people have gotten sick from eating seafood containing these natural toxins?
It is difficult to know how many people have experienced symptoms from these toxins. It is likely that many cases go unreported or are classified more generally as food poisoning, especially if the symptoms are mild.

According to readily available literature, there have been only a few confirmed cases of amnesic shellfish poisoning (ASP) in North America and none in the United States. All of these cases were from people who had eaten affected mussels or razor clams. Many more cases of paralytic shellfish poisoning (PSP) have been reported over its longer history, but cases have declined with improved monitoring and education. Mussels, oysters, clams, and scallops have all been associated with PSP cases.

How do you know when a seafood is affected by a harmful algal bloom?
Check current seafood consumption advisories by visiting the California Department of Public Health (CDPH) website or calling the CDPH hotline at 800-553-4133.  Also, for up-to-date information about fishery closures specifically related to elevated domoic acid levels, call 831-649-2883.

Unfortunately, you can’t tell whether seafood is affected without laboratory analyses. The ocean typically does not change color during the harmful blooms, and the toxins can linger in the ocean and in certain seafood after the bloom has ended. Because of this, the CDPH, with help from coastal communities, monitors for these microalgae as part of the state’s Biotoxin Monitoring Program. They regularly sample water from the ocean to see when these microalgae are present, whether they are producing the toxin, and whether seafood is accumulating the toxin. CDPH issues public health seafood consumption advisories when toxins are above regulatory limits set by the US Food and Drug Administration (FDA).

What causes the microalgae to produce the toxins?
We still don’t know what triggers these particular algae to produce neurotoxins. While warmer temperatures and lots of nutrients in the ocean help the phytoplankton multiply, it remains unknown why the algae only sometimes produce toxins.

How often do harmful algal blooms occur in California?
Harmful algal blooms are unpredictable. They don’t occur every year, and the areas affected by them can be small or large and vary from year to year. That said, there are certain places in California where blooms have occurred more frequently, including the Santa Barbara Channel, Monterey Bay, and waters off Humboldt County. These areas are known to have ocean waters that are especially rich in nutrients – something that is believed to play a role in the formation of harmful algal blooms.

Also, certain groups are more sensitive to these toxins, including pregnant women, children, elderly people, and those with certain medical conditions such as diabetes and kidney disease.

Generally seafood is safe as well as nutritious. Only certain types of seafood may contain harmful algal bloom toxins, and only at certain times, and from specific places.

Seafood source: California seafood may be farmed, commercially caught, or recreationally caught. Each of these sources represents different risks to consumers:

Seafood preparation: During a bloom, it is important to check the recommendations provided by the CDPH public health seafood consumption advisories. Often the potentially affected species will be safe to eat if you remove the internal organs before cooking them provided there are no seafood consumption advisories specific to the meat. Cooking does not destroy these toxins, and they can leach into water when cooked, making broths, soups, and stews very risky to consume even if the animal is not left in it. Clean out the internal parts first and then cook just the meat.

What parts and types of seafood you eat: Toxins primarily accumulate in the stomach and guts of animals. That makes some species riskier than others to eat.

Effects on other animals

Is other sea life affected by these harmful algal blooms?
Yes. The neurotoxins produced by these blooms affect mammals, including marine mammals like dolphins, sea lions, and seals, when they eat affected seafood.

These toxins also affect seabirds like pelicans and cormorants. In fact, the Alfred Hitchcock movie The Birds is believed to have been inspired by an event where birds had become sick from the toxins.

What happens to marine mammals like sea lions that eat contaminated seafood?
Domoic acid can move through the food web when small fish like anchovies and sardines consume algae containing the toxin. Marine mammals that eat these fish may become sick. Sea lions that have become sick from the toxins often end up on the beach with symptoms that can include head-weaving or bobbing, confusion, and disorientation, aimless circling, or seizures. Domoic acid toxicity can be fatal to sea lions, but treatment by a trained professional may allow them to recover.  If you see a marine mammal in distress, please call the NOAA West Coast Marine Mammal Stranding Network at 1-866-767-6114.

For the safety of you and the animal, keep yourself, pets, and children at a safe distance away: at least 150 feet (as required by federal law). 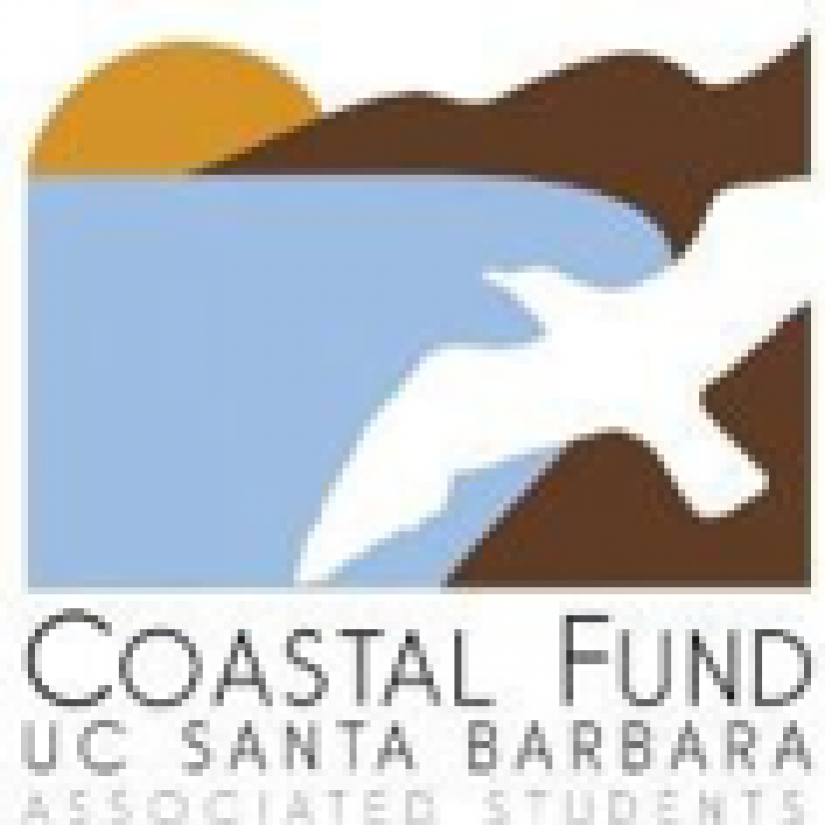