A commercial fishery is typically defined in terms of one or more of the following:

Examples of commercial fisheries in California include:

Note that some species may be known by more than one name – for example, blackcod and sablefish.

Commercial fishermen use a variety of gear types and methods to catch fish (defined here to include both finfish and shellfish) in California. One or more gear types or methods may be used to catch a given species. For example, rockfish are caught using trap, hook-and-line, and trawl gear, while sea urchins are fished solely by divers.

An individual fisherman uses a specific fishing method depending on:

Regulations specify which gear types and configurations may be used to catch each species, as well as when and where fishing may occur. The overall size and configuration of the vessel determine the type and amount of gear that can be handled and stowed, and how far from shore a fisherman can safely travel. California commercial fishing vessels maybe as small as 10 to 12 feet in length (e.g., skiffs), and are rarely larger than 80 feet, with vessel size related to the locations and conditions fished, the gear used, and the species targeted. And whereas some species are found in a variety of depths and habitats, others tend to occur in particular locations. The size of the hold (where the catch is stored on the boat) and equipment for maintaining quality (e.g., keeping catch alive, onboard freezing) determine how much catch can be carried and how often the fisherman must return to port to offload the catch.

The following are general descriptions of these gear types with examples of associated fisheries. For more detailed information on fishing gear, including additional types not described here, please visit the sources provided at the bottom of this page.

The use of hook-and-line gear in California’s commercial fisheries includes a variety of configurations, each appropriate for catching particular species in certain habitats. Hook-and-line fishing methods include longline, troll, pole-and-line, and other related methods. Longline gear consists of a main line with baited hooks attached to shorter lines attached a intervals, withy the gear usually set in place to “soak” for a time to attract the fish. Troll gear includes one or more fishing lines with lures or bait attached, with the lines drawn (“trolled”) through the water to attract the target species, most commonly salmon and albacore. Pole-and-line gear consists of rigid rods or poles with baited lines that are used increasingly by California fishermen to catch white seabass, California halibut, as well as tuna and other species traditionally targeted using this gear.

Longline – groundfish: This gear includes a line that extends horizontally along the sea floor with baited hooks at set intervals along the line. The gear is typically left to soak for 12-24 hours, after which time the gear is retrieved, fish removed and gear redeployed. Targeted species include flounders, soles, rockfish, lingcod, sablefish, and skate, to name just a few. 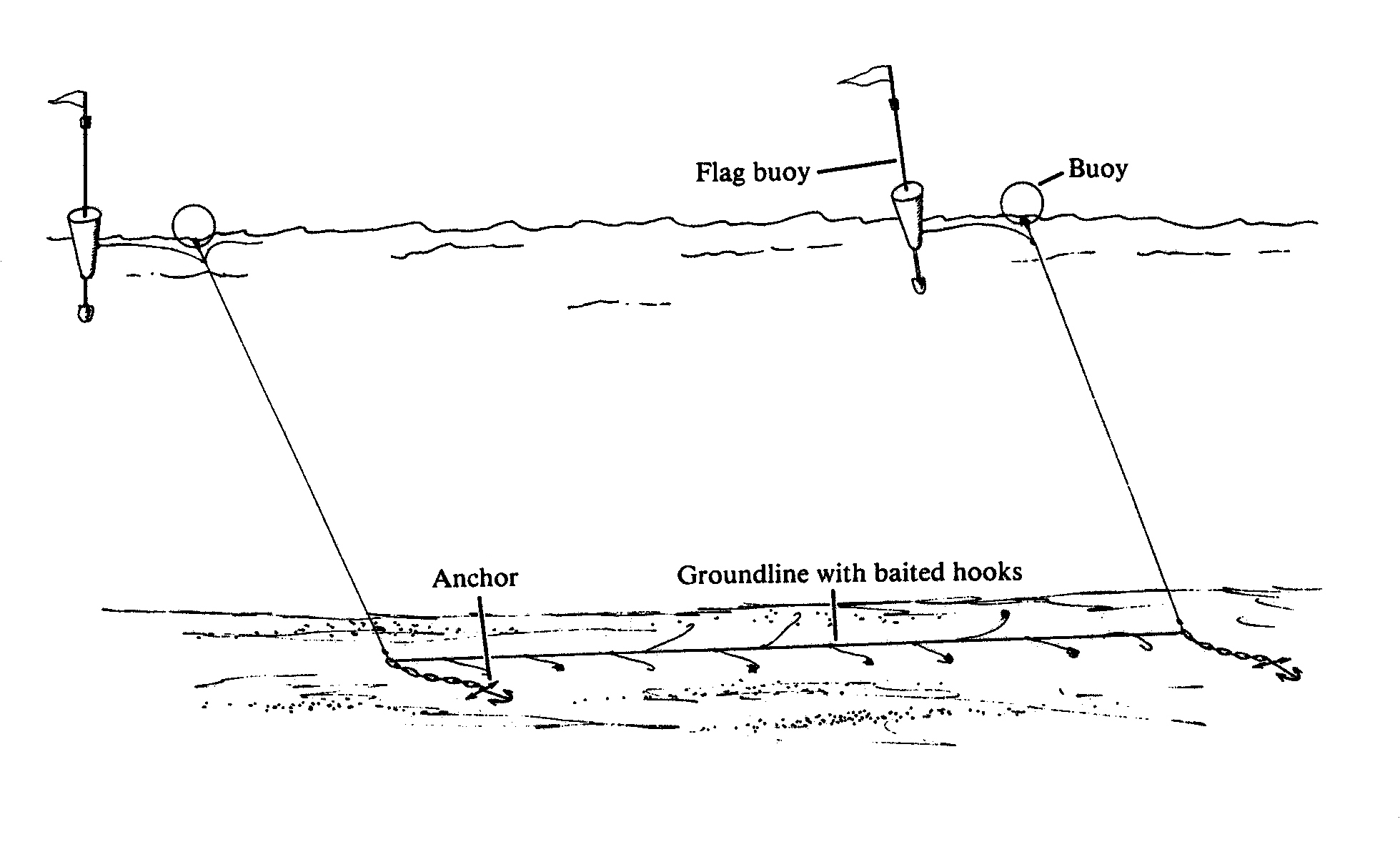 For some species (e.g., rockfish), vertical longline or more rigid ‘stick’ gear maybe used. The vertical longline is weighted on one end and held vertical by a buoy at the sea surface, with several hooks attached at regular intervals, to better catch fish that may “stack” vertically in the water column. near vertical structures (e.g., around rocky outcrops or canyon walls). Stick gear consists of a length of PVC pipe with leaders attached at intervals along it, each with a hook at the end, to catch bottom or near-bottom species, especially for the live fish market.

Troll – albacore and salmon: Trolling is a hook-and-line fishing method whereby hooks are attached to lines deployed from outriggers (long poles) that extend on each side of the boat and are pulled through the water to attract fish. When albacore fishing, lures are used, the gear is deployed at or near the surface, and the boat travels at high speeds (5 to 8 knots). When trolling for salmon, bait or lures may be used, the gear is deployed at different depths depending on where the fish are, and the vessel moves at slower speeds (less than 3 knots). 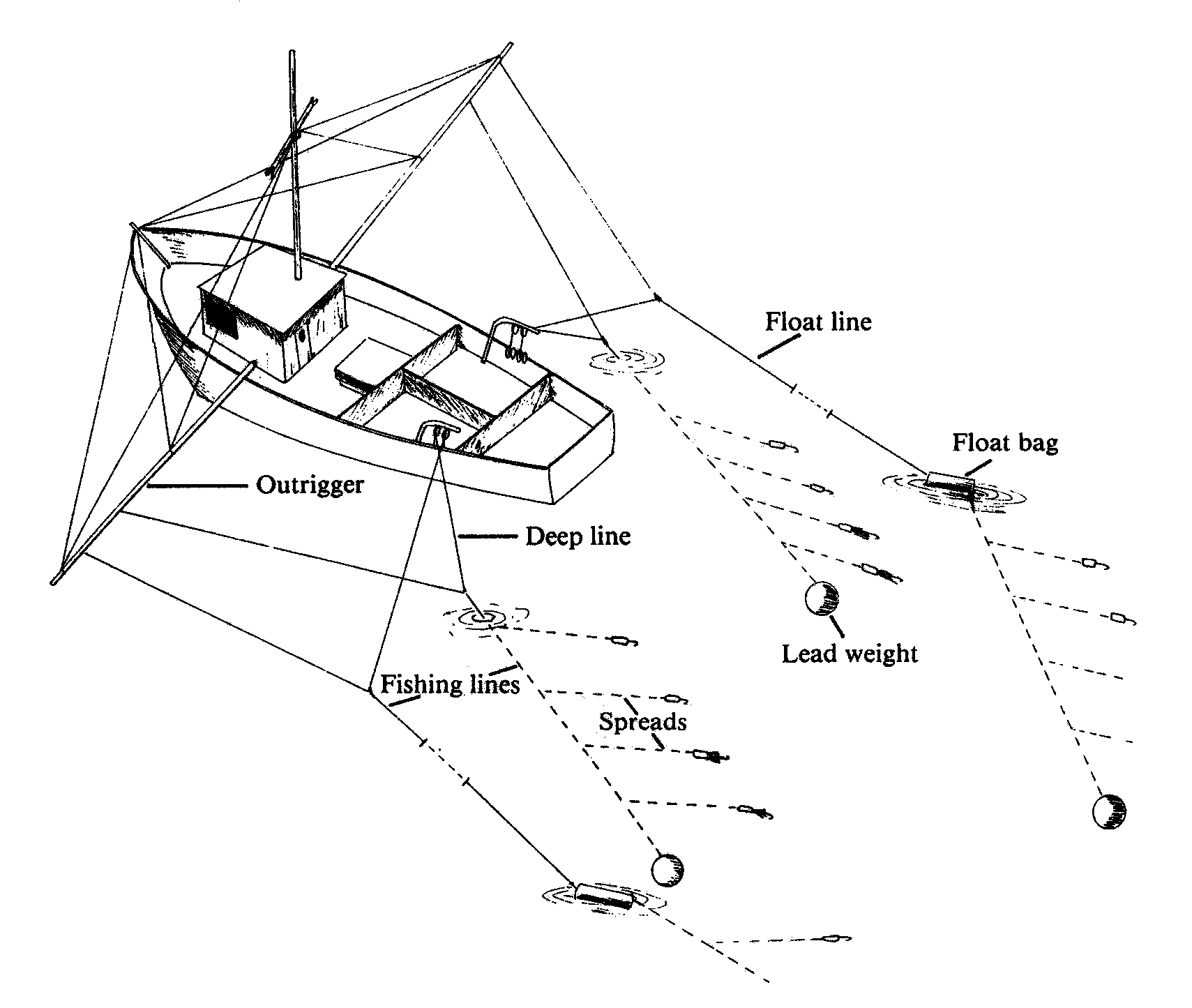 Pole-and-Line  – albacore tuna, white seabass, California halibut: As the name suggests, this hook-and-line fishing method involves a line with a hook that is attached to a pole. Pole-and-line vessels typically carry live bait which is used to attract the target species. Many fishermen start a fishing trip by catching their own bait, although some buy live bait directly from others who catch it; in both cases, the bait is stored in a “live well” on the boat until it is needed. In southern California, halibut caught using this method may be kept alive in the live well; in other cases, it is packed in ice in the hold or in containers on the deck.

There are several different types of net fisheries in California, each involving a specific configuration, size and method for its use, to target particular species. Three major types of net gear are used in California: gillnets, purse seines and trawls. The gear used and its specific size and configuration  depend on the species targeted,  its behavior, and where it is commonly found.  Further, for each gear type, the mesh size (the space between knots in the net) differs, and is designed to maximize the catch of the target species while minimizing the catch of undersized and/or non-target species. Thus, a trawl net used to target shrimp differs from one used to target groundfish. 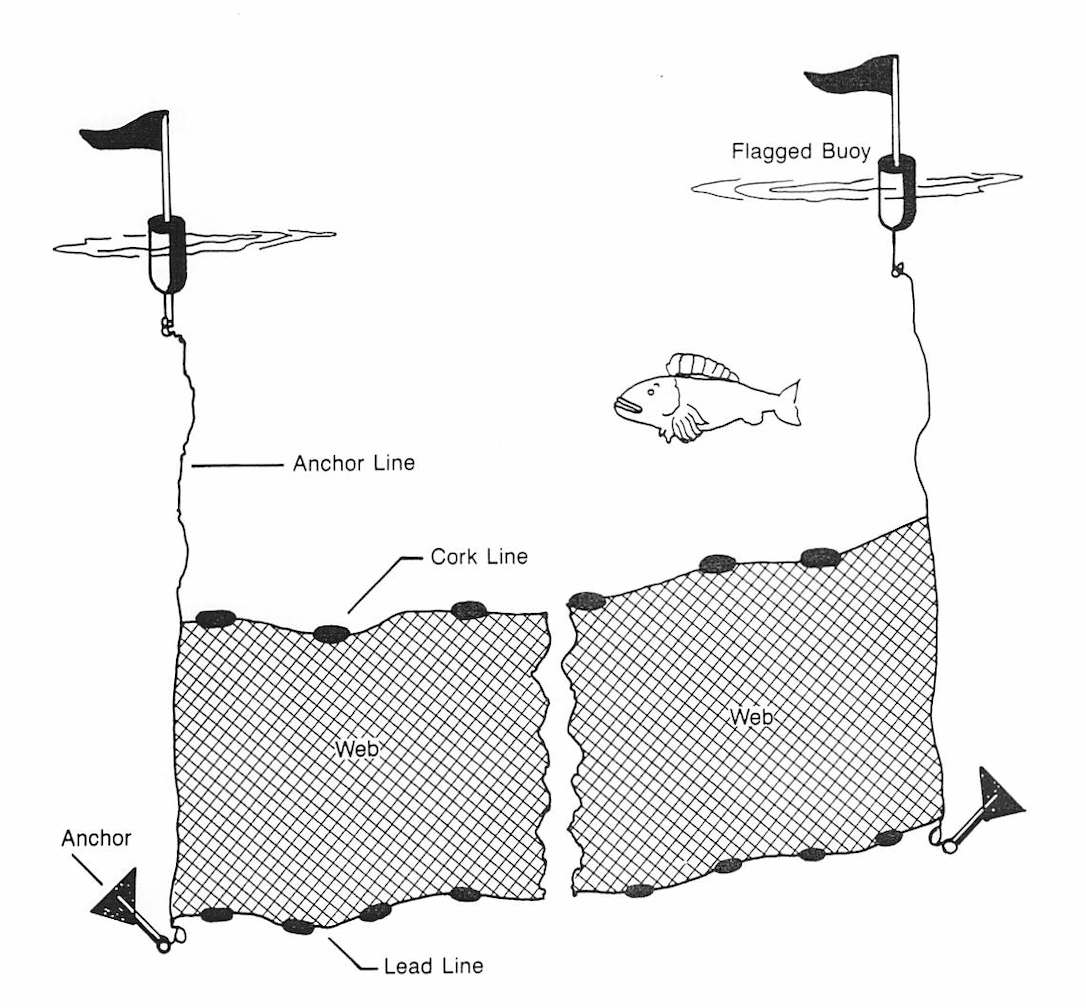 Drift Gillnet – barracuda, swordfish, thresher shark, white seabass: The drift gillnet is attached to the back of a fishing boat and drifts behind it, below the surface of the ocean. Drift gillnets often are deployed at night and retrieved at dawn. As with set gillnets, the mesh size varies depending on the species fished. Drift gillnet fishing is restricted to certain locations within federal waters; however, permits for this gear are to be phased out by January 2023.

Purse Seine – anchovy, mackerel, sardine, squid, tunas: The purse seine, a type of “roundhaul” gear, is a net that encircles a school of fish or squid. The top of the net has floats or buoys made of cork. The bottom of the net is weighted to hold it in position, and includes a wire cable that is used to draw the net closed, “pursing” the catch. A skiff is used to deploy the net and bring it close to the fishing vessel where fish are pumped (or sometimes scooped) out of the net and into the boat’s fish hold. When fishing for squid, high-intensity lights attached to the purse seine vessel itself or a smaller vessel known as a lightboat, also are used to attract and concentrate the squid so they can be caught in the net.

A trawl is a type of net gear that opens as it is pulled (towed) through the water. The net is funnel-shaped with a closed tail end (cod end) where the fish are collected. The net is equipped with trawl doors, which act as wings, helping to keep the net open horizontally, while a “floatline” on the top and a “footrope” on the bottom of the net create the vertical opening. The nets are towed for various amounts of time, with shorter tows used in some fisheries to increase the likelihood that the catch will remain alive (for specialized live markets) and be in the best possible condition when it’s delivered to the buyer, and to minimize the catch of non-target species.

Bottom Trawl – Groundfish: This trawl gear is used to fish along or near the seafloor (bottom) as described above. The mesh size can be no smaller than 4½ inches (about 11 cm) when fishing groundfish in most areas. However, for trawlers targeting California halibut in state waters, the mesh size must be substantially larger – a minimum of 7½ inches (19 cm). Targeted species include flounders, soles, rockfish, lingcod and skate.

Bottom Trawl – Shrimp: Shrimp trawlers tow single- or double-rig (i.e., one or two) nets near the seafloor. They are similar to groundfish trawls, except the net is usually suspended off the bottom and the minimum mesh size is smaller (1.375 inches (3.5 cm)). A lightweight ‘tickler’ chain, which periodically hits the bottom, is used by some fishermen to get the shrimp off the bottom and into the net. Bycatch reduction devices (BRDs) are required and are incorporated into the nets to make it easier for non-target species to escape. 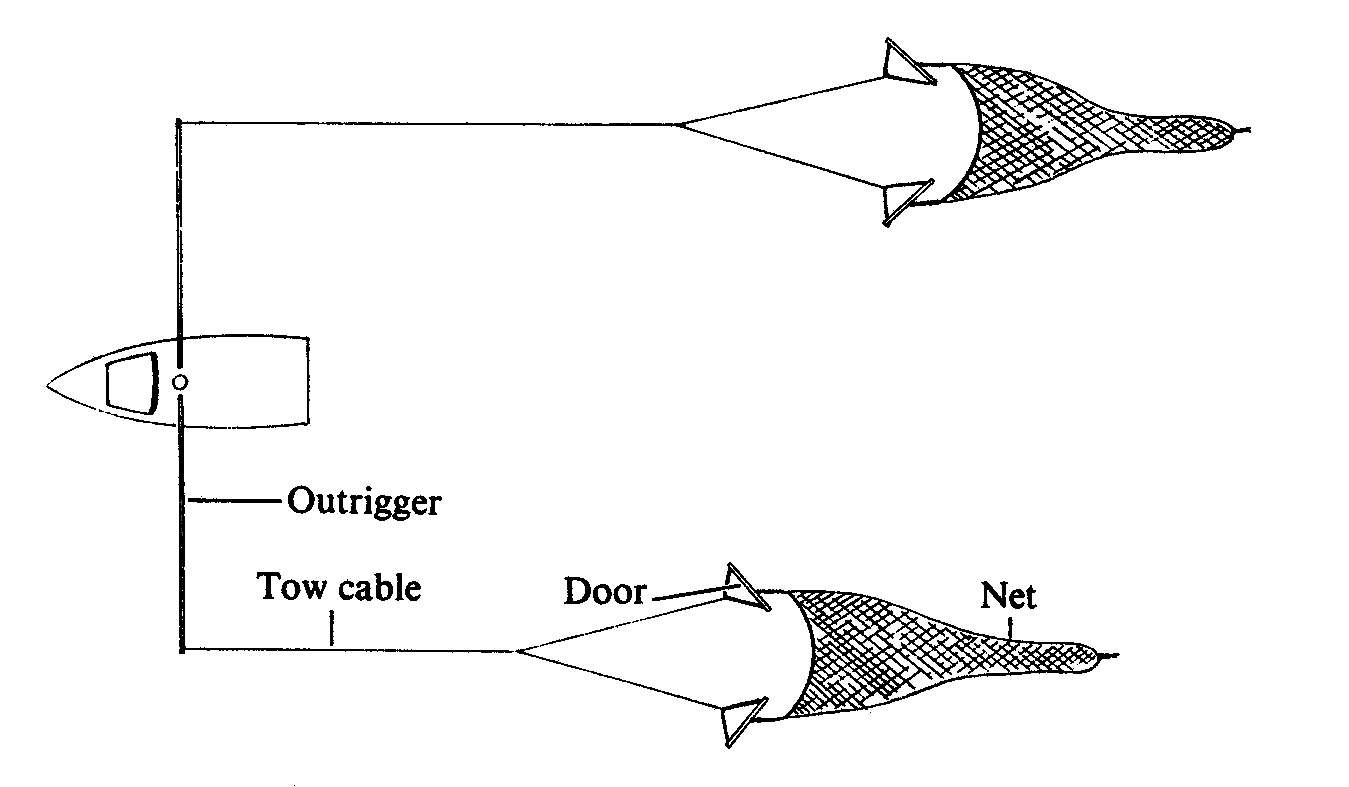 Midwater (Pelagic) Trawl – Hake (Whiting): Midwater (also known as pelagic) trawls are towed through the water column and have little or no contact with the bottom. They have a minimum mesh size of 3 inches (about 8 cm). This type of trawl requires a vessel with substantial horsepower. Midwater trawls are not used widely in California because the target species, hake, is found primarily off the coast of Oregon and Washington.

The terms pot and trap are often used interchangeably. However, in California pots tend to be oval or circular, whereas traps are typically rectangular; both may be made of wire and/or plastic. These types of ‘fixed gear’ have an opening (funnel) that is located on the side of the trap, either near the bottom or in the center depending on the target species. They also have an escape port that allows smaller and other non-target animals to exit. Should the trap become lost, a biodegradable ‘destruct device’ will disintegrate, resulting in an opening that allows captured animals to escape. Pots/traps are baited and deployed on the bottom of the ocean at various depths, and are left to ‘soak’ for anywhere from hours to days, depending on the species targeted, weather, and oceanographic conditions. Traps/pots are set separately with a surface buoy marking each trap or in strings with multiple traps tied to a groundline, with an anchor and a buoy at one or both ends.

Pots/Traps – Crabs, lobster, spot prawn, nearshore finfish: Crab pots are used to catch Dungeness crab. Traps are used to catch lobster, spider (sheep) crab, three species of rock crab (relatives of the Dungeness crab), spot prawn and nearshore finfish (e.g., rockfish, lingcod, cabezon). For lobster and crab, the opening (funnel) is located on the side near the bottom so the lobster and crabs can crawl from the ocean bottom into the trap. For spot prawn and nearshore finfish, the funnel is on the side in the center to allow them to swim into the trap. Lobster and crab traps/pots are set in shallower waters (typically < 300 ft/100m), whereas spot prawn traps are set in deeper waters (600-1,080 ft; 180-330 m).

Trap/Pot – Sablefish (blackcod): Sablefish are caught using conical pots or rectangular traps that are larger, heavier, and shaped differently from the other types of trap. The funnel (opening) is in the center along the side of the trap/pot allowing the fish to swim into the trap. This gear is set in water depths averaging about 1,080 ft (330 m).