California fisheries – and fishery participants – are managed by diverse state and federal regulations designed and implemented by several agencies. All commercial fishermen (captains and crew) are required to have a license from the state (renewed annually). In addition, nearly all fisheries require a fishery-specific permit. Similarly, businesses that purchase seafood from fishermen are required to have appropriate licenses and permits and to meet health and safety standards designed to ensure that seafood provided to the public has been handled properly.

For information on how fisheries data are collected and analyzed, see the “Measuring Fishery Activity” page.

Fisheries are managed using a combination of regulations aimed at allowing appropriate catch levels to sustain healthy marine ecosystems and associated coastal communities. Regulations can differ across regions, especially with variations in fishery resources, marine environmental conditions and fishing practices. The most common management measures are:

Fisheries are managed through state, federal and international processes. Who manages a fishery depends largely on where it occurs:

Some species that move along the entire West Coast, such as sardines, are managed at the federal level even though they are caught primarily in state waters. In some cases (e.g., tunas, Pacific halibut, salmon), fisheries also may be subject to international management agreements, which in turn influence federal and state management. The following chart provides a few examples of California fisheries and associated management authority. 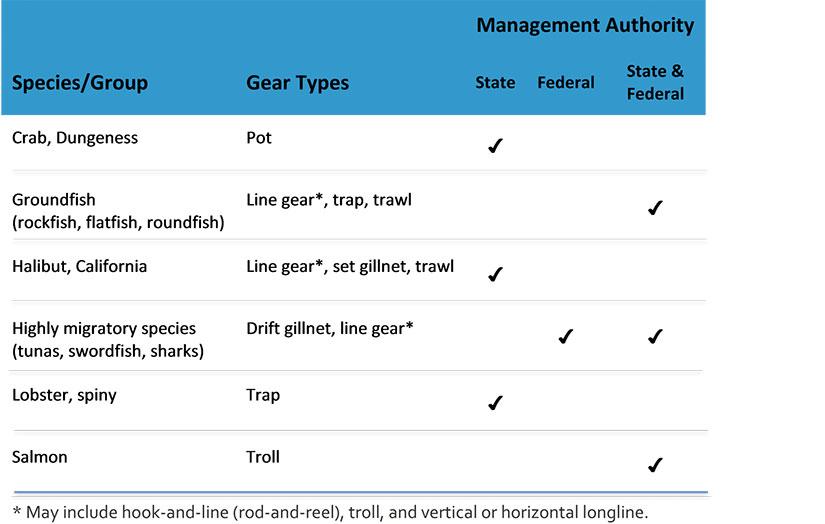 As mandated by federal and state policy, CDFW, CFGC, PFMC, and NMFS staff create and update FMPs for species (e.g., white seabass) or species group (e.g., groundfish) with input from scientists, fishery managers and stakeholders. While the state and federal processes differ somewhat from one another, both involve the analysis of biological, environmental, economic and social factors affecting the fishery, with development and modification (as needed) of management alternatives and regulations. As such, these documents cover a range of information including the history of the fishery, the biology and status of the fishery population(s), the socioeconomics of the fishery, and management alternatives. Each FMP undergoes public and agency review before it is approved and implemented. In some cases, state- or federally-appointed advisory groups, which include fishery participants and representatives of environmental non-governmental organizations and the general public, play an ongoing role in the management process.