Catalina Island, located off the coast of Southern California, is a tourist's paradise that attracts boaters, hikers, divers, and snorkelers, who boat or ferry to the island to hike its miles of undeveloped coastline, camp at isolated coves with glittering aquamarine water, or enjoy dining and activities in one of the island’s two small towns.

The island’s Two Harbors and Avalon Harbor teem with boats, especially in the summer months, when ferries and private boats frequent the island, the most accessible in California’s Channel Islands, only 60 minutes by express ferry from Long Beach.

These harbors are also rife with marine life. Recent research shows that these semi-protected harbors are the perfect habitat for rare coral-like red algae known as rhodoliths. Like corals, these algae form calcium carbonate ‘skeletons’ that grow in spherical branching patterns. Then in the gentle wave action of semi-protected harbors, the rhodoliths roll around on the ocean floor like tumbleweeds, forming into spheres, with pockets of open space between the branches. 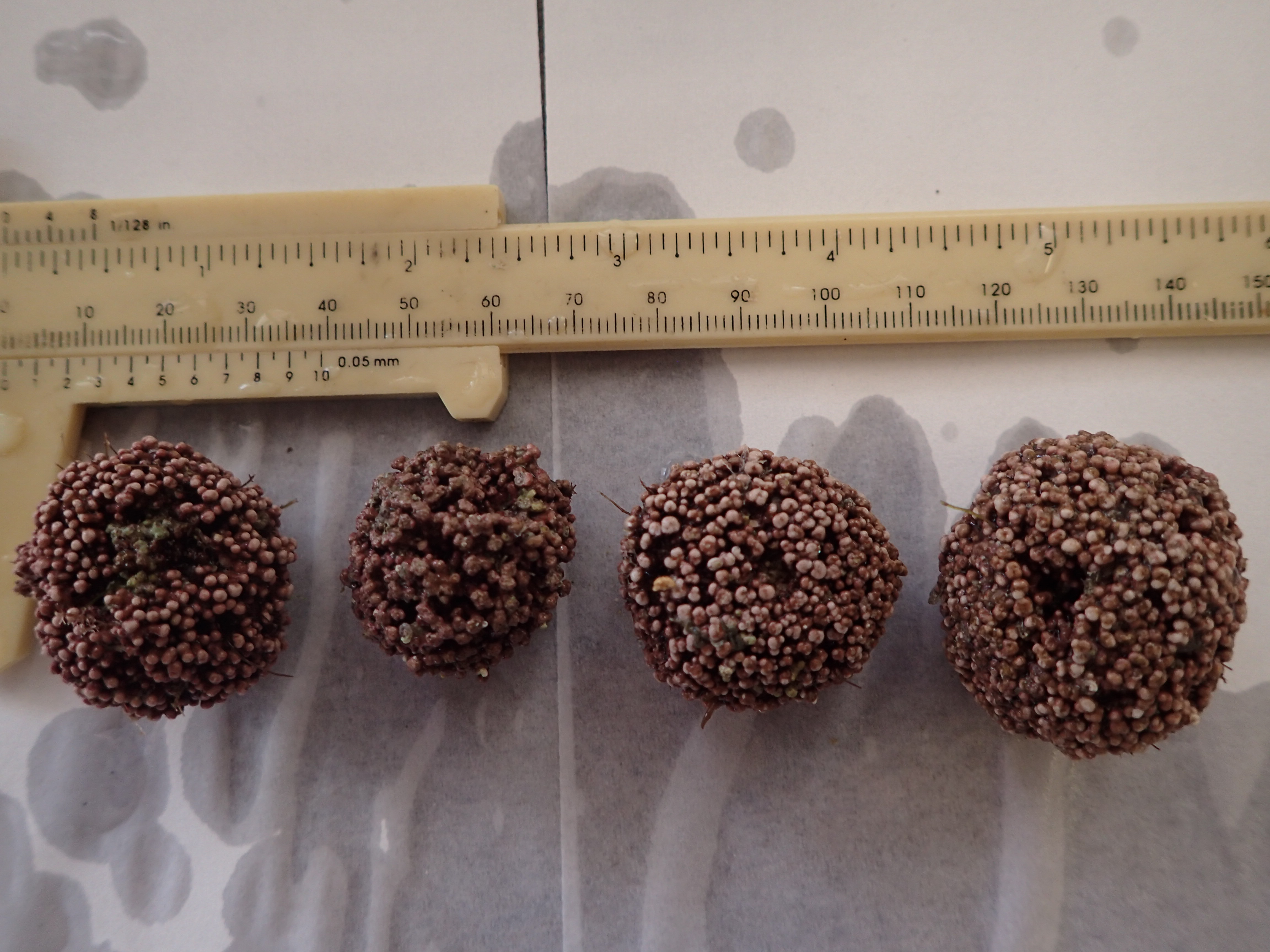 “And because they form a hard structure that's heterogeneous, a lot of organisms can settle, survive better and live there. They act often as nursery grounds, and/or habitat for holdfast of different species,” she adds.

Rhodolith ecosystems are found in all of the world’s oceans, and on the West Coast they have been found from along the Baja California peninsula, where they are common, all the way to the Aleutian Islands. But because these ecosystems are relatively rare and discontinuous, they have not been well studied or mapped, and their broader contribution to ocean ecology is not well understood.

Steller is one of the world’s foremost experts in rhodoliths, having studied these ecosystems for the past 30 years. Until the late 2000’s most of her research had focused on the Gulf of California off Baja California Sur, Mexico, where rhodolith beds are widespread.

“In California, which is much more exposed and temperate, they aren't as common,” says Steller. But she had heard intriguing reports of rhodoliths in California’s Channel Islands, specifically Catalina Island, and the species appeared in the iconic 1987 book by Abbott and Hollenberg, “Marine Algae of California,” hinting that California’s coast may also host a few of these scattered coralline algae ecosystems.

So in 2010, Steller and then graduate student Paul Tompkins applied for California Sea Grant funding and set out to map the location and extent of Catalina Island’s rhodolith beds. The small project, conducted with snorkel manta tow surveys and scuba surveys combined with aerial mapping, led to the first map of the extent Catalina’s rhodolith ecosystems, and launched a series of projects that have led to better understanding of rhodolith ecosystems in California.

Disturbances on the ocean floor

But at the same time that they were first mapping Catalina’s rhodolith beds, the researchers found reason for concern.

“The problem is that where rhodolith beds are found—in protected bays—is right where boats want to anchor,” says Steller. Under the boat moorings at Avalon and Two Harbors, the researchers saw rhodolith beds crushed by heavy mooring chains, the complex ball structures broken down into coarse sand. In their initial mapping study, they also found that 100% of surveyed rhodolith beds around Catalina had moderate or severe damage.

Subsequent work by Moss Landing Marine Laboratories graduate student Scott Gabara examined the diversity of organisms living in the beds, and the trophic interactions of the community ranging from fish to algae and invertebrates. Gabara found many juveniles of a variety of species, including the commercially caught species such as wavy turban snails (Megastaea undosa). He also found, rather unsurprisingly, that in damaged beds, there was lower biodiversity. These results were published in a 2018 study. 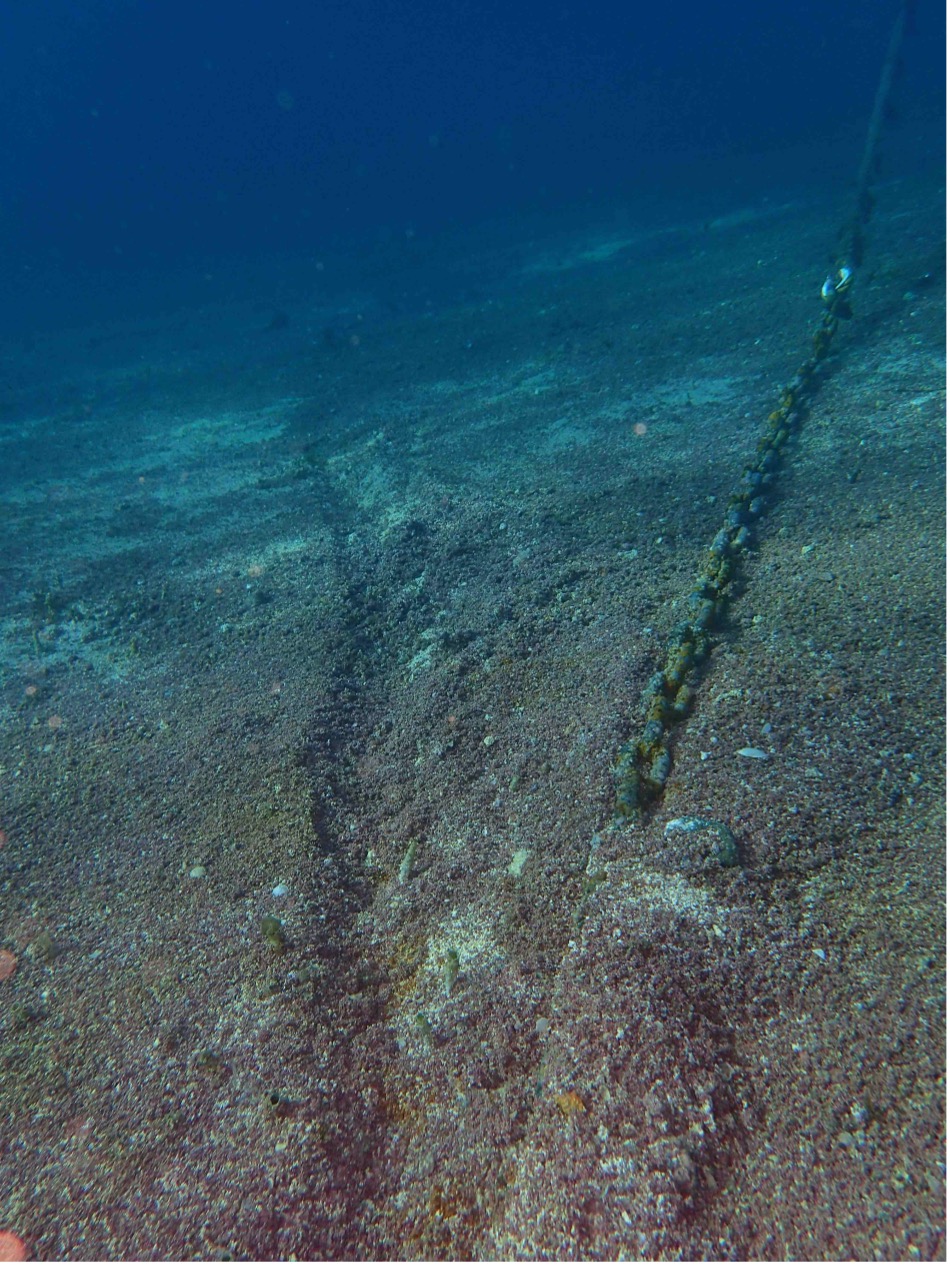 In 2018, Steller and San Diego State University Professor Matthew Edwards, an expert in algal physiology, proposed another California Sea Grant project to explore these questions and define what features or metrics should be measured to monitor the beds.

Edwards says, “Rhodoliths are fascinating as an ecosystem because on the one hand they form structures that can be used as nursery or habitat for other species. But they're also algae themselves, which means they photosynthesize, so they produce oxygen, and they take up carbon dioxide.”

Those chemical processes are something that researchers can use to measure the growth—or productivity—of an ecosystem. Productivity is a metric that they can then use to compare the ecosystem to others, and to understand the impacts of disturbances.

The researchers, which included Sea Grant-funded graduate students at SDSU and Moss Landing Marine Laboratories, measured productivity using chambers on the ocean floor, as well as with smaller samples in the laboratory. Billie Beckley, a SDSU Master’s student who was awarded a Sea Grant Traineeship, helped organize and lead the field and laboratory research. Their team was surprised to find that some of the impacts of crushing were not immediate, but rather emerged with continued disturbance. These results were published this winter in a study led by SDSU undergraduate student Dillon Dolinar, who was also the SDSU Biology Department’s Outstanding Graduating Senior in 2020. They also measured how individual rhodolith size and structure impace photosynthetic rates and these results were published in a study with Ju-Young Kim, a researcher from the Republic of Korea.

“Respiration and photosynthesis are both affected by crushing but not necessarily in the way we thought,” says Edwards. “If you pulverize these rhodoliths into little bits, they don't always die. In fact, some bits can regrow and become new rhodoliths. This occurs slowly so it’s the long term, continued disturbance, I think is where the big impacts come from.”

As part of the project, the researchers defined types of mooring disturbance and explored the potential to use different types of mooring chains that may have a smaller impact on the ocean floor. While a lower impact and more flexible mooring system turned out to be insufficient to withstand Catalina Island’s waves, the researchers found that instead altering existing moorings to reduce the amount that chains dragged on the ocean floor would reduce bottom disturbance.

This study spawned many fruitful future research projects, including a test of the ability of drones to survey the distribution of living rhodolith beds.  MLML/CSUMB graduate student Charnelle Wickliff is examining if mooring scars are detectable from these aerial surveys. 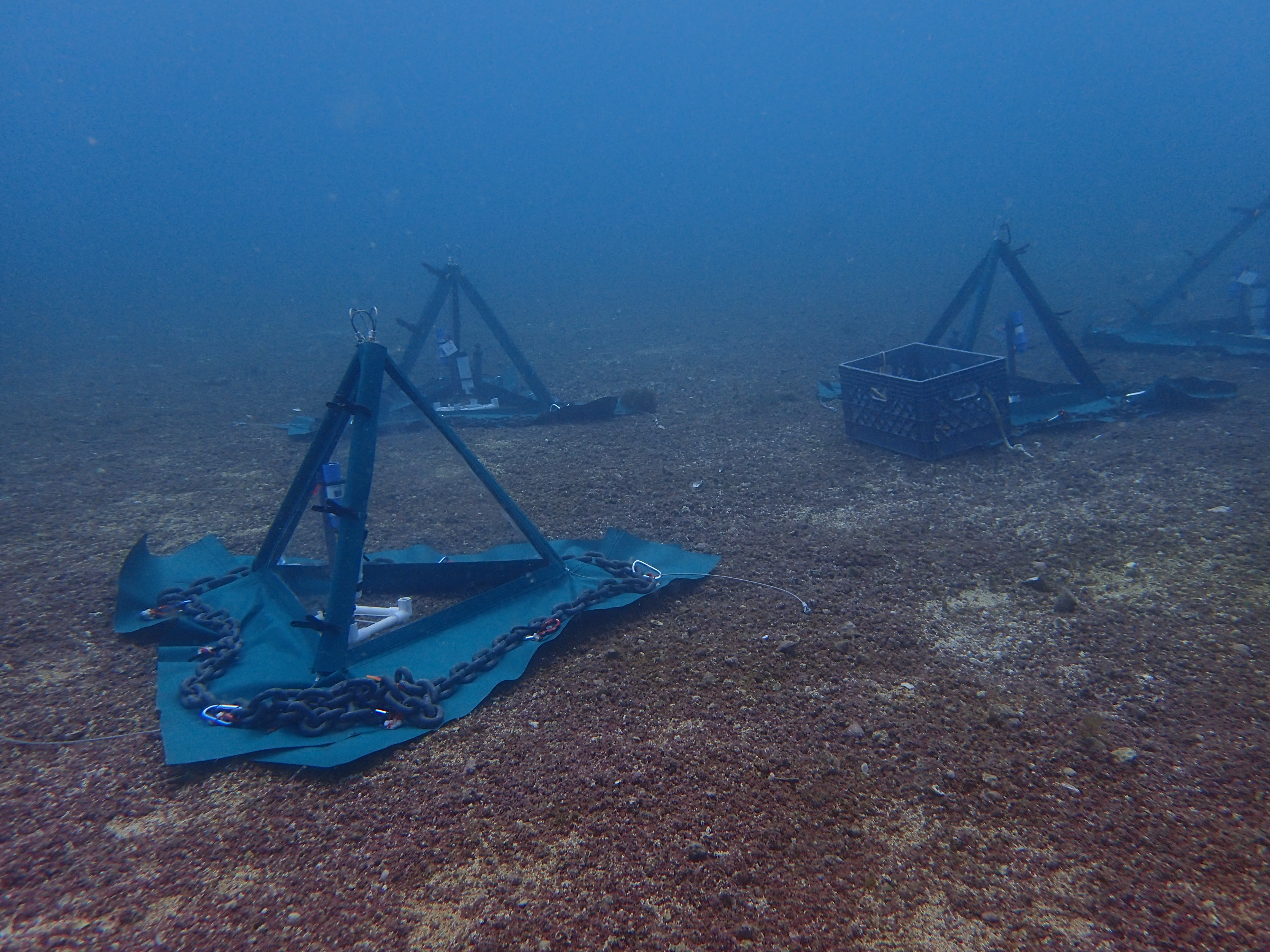 Because rhodolith habitats are so rare in California, the ecosystems have not received much attention from resource managers and haven’t been specifically included in California’s MPA monitoring programs.

The new research provides some of the basic metrics that the state would need in order incorporate rhodolith habitats into broader planning and protections.  Gabara, as a SDSU/UCD Ph.D. student and now a University of Alaska post-doc has been integrally involved with this effort, expanding the scope of the research beyond his MS results.  Collectively the researchers have established methods for biodiversity surveys and produced results in hopes of it leading to enhanced recognition and protection.

Steller says, “If we think these beds are something in our coastal ecosystem that should be valued, step one is to find a way to measure them, define them, and detect change, and that’s what we’ve done in these projects.”

As a calcium-carbonate forming species, rhodoliths are likely also to be affected by ocean acidification caused by rising levels of carbon dioxide in the atmosphere. Steller and Edwards are currently pursuing funding for a larger, multi-university research project to explore extent of rhodolith beds in the Northeastern Pacific and the impacts of ocean acidification and the interactions of species. 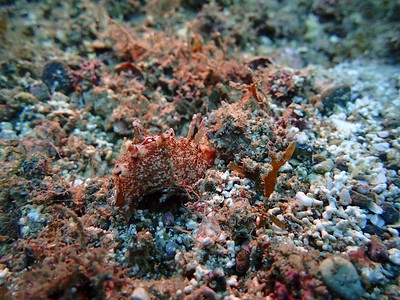 This research was conducted out of USC Wrigley Institute for Environmental Studies. 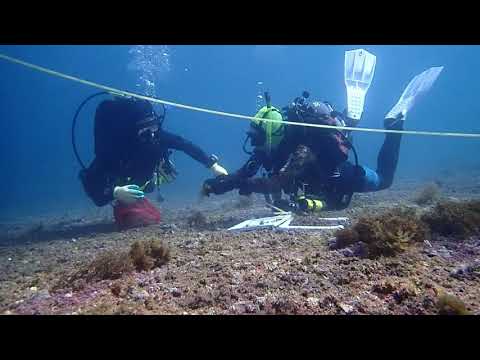 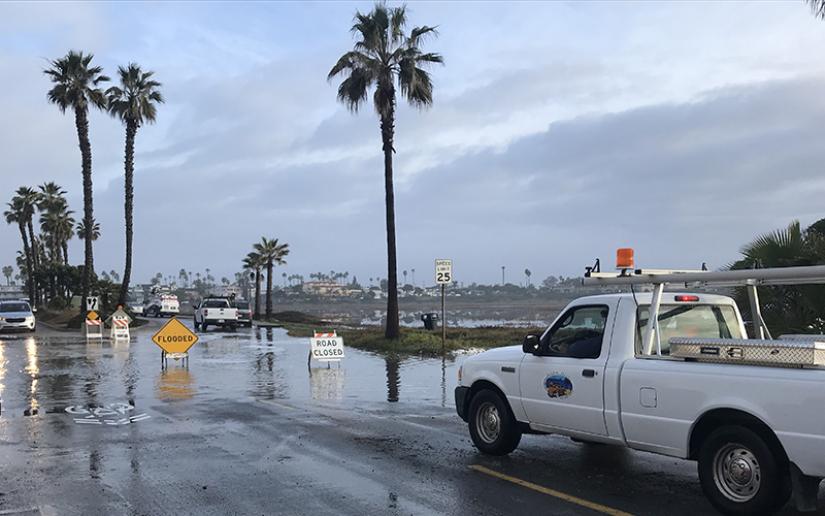 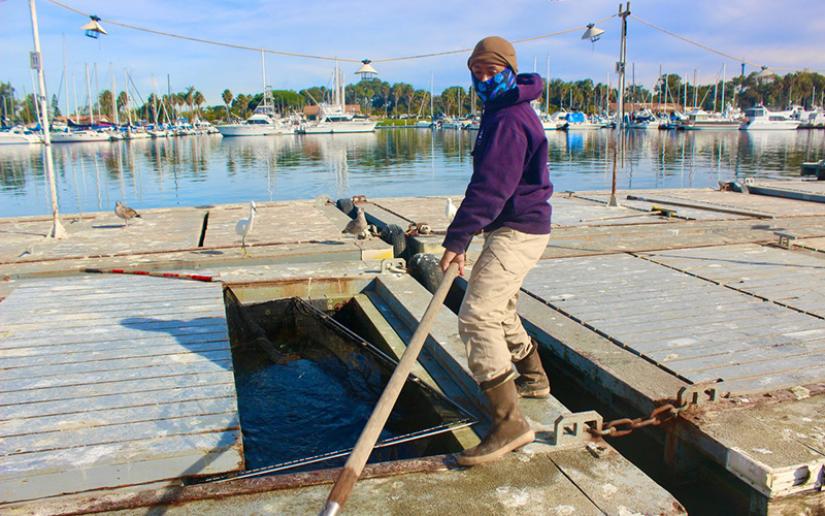