The Walbridge Fire and salmon habitat

Between August 17 and October 2, 2020, the Walbridge Fire burned more than 55,000 acres and destroyed more than 150 homes in the rugged hills of northwestern Sonoma County.  These beautiful, forested watersheds contain some of the most productive salmon and steelhead-bearing tributaries to the Russian River.  Sonoma County’s Watershed Task Force and the Watershed Emergency Response Team are working to assess and address large-scale environmental damage from the fire, but the effect on salmon is not yet clear, and will likely take some time to become evident. Impacts from wildfire to natural systems can vary greatly depending on the localized intensity of the burn. While there is the potential for instream habitat degradation, including effects related to diminished riparian vegetation and increased erosion, fire is a necessary and historically natural occurrence that can also create ecosystem benefits, such as improved plant diversity and wood recruitment into the stream channel.

In an effort to better understand the current and future impact of the fire, we are teaming up with Sonoma Water to monitor additional parameters in streams within the burned areas. We are especially interested in how fire changes instream conditions, including temperature, pH, large wood accumulations and sediment load.

Evaluating maps of salmon habitat within the fire perimeter is a first step in understanding the potential impact to endangered coho salmon and threatened steelhead in affected Russian River streams.  The following map shows that 21% of the Russian River Coastal Monitoring Program coho salmon reaches fall within the Walbridge Fire perimeter.  This habitat also supports steelhead. 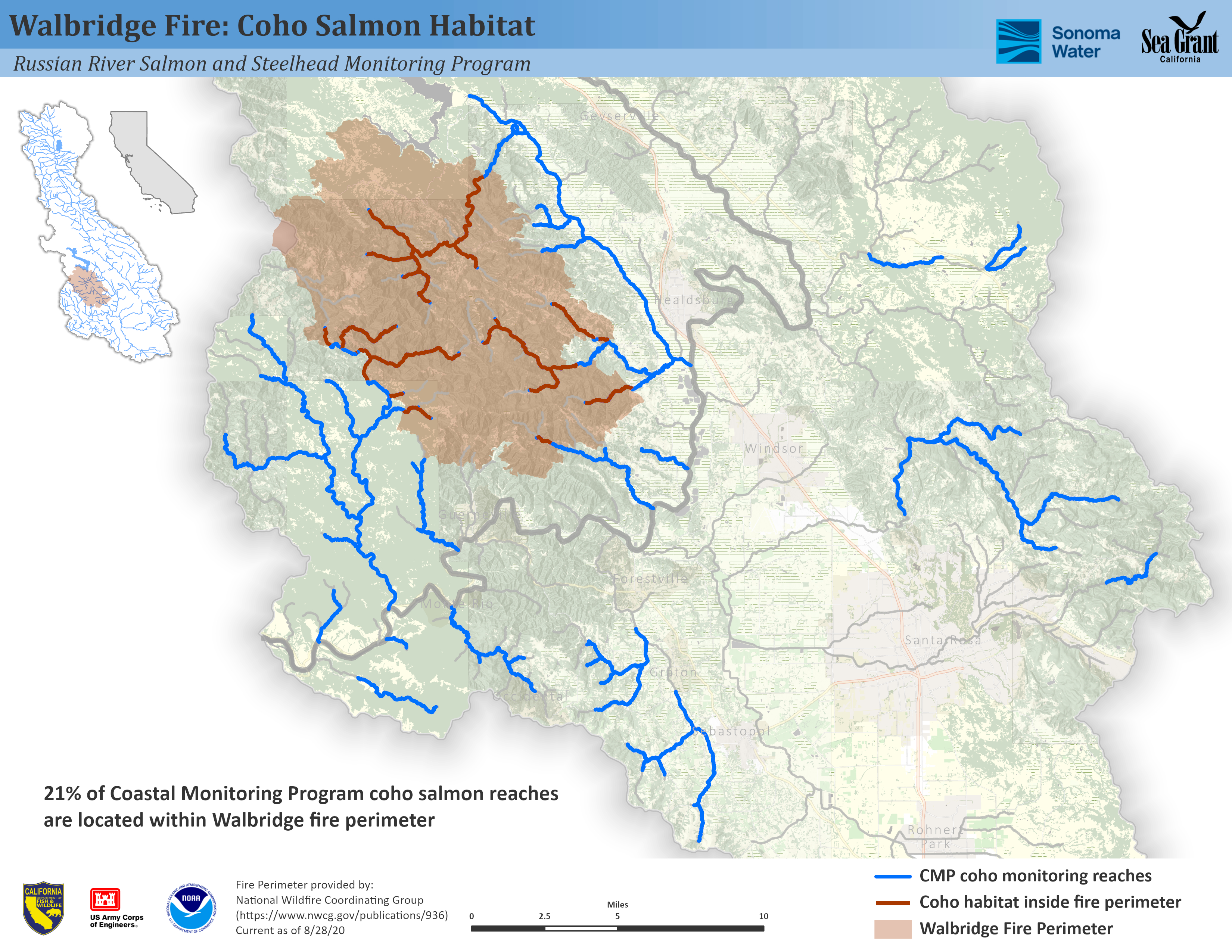 The watersheds affected by the fire include the East Austin Creek (East Austin, Gilliam, Thompson, Gray and Devil creeks), Porter Creek, Mill Creek and Pena Creek systems.  The length of each of these streams that burned ranged from 11% to a full 100%, and the intensity of the burn varied greatly. 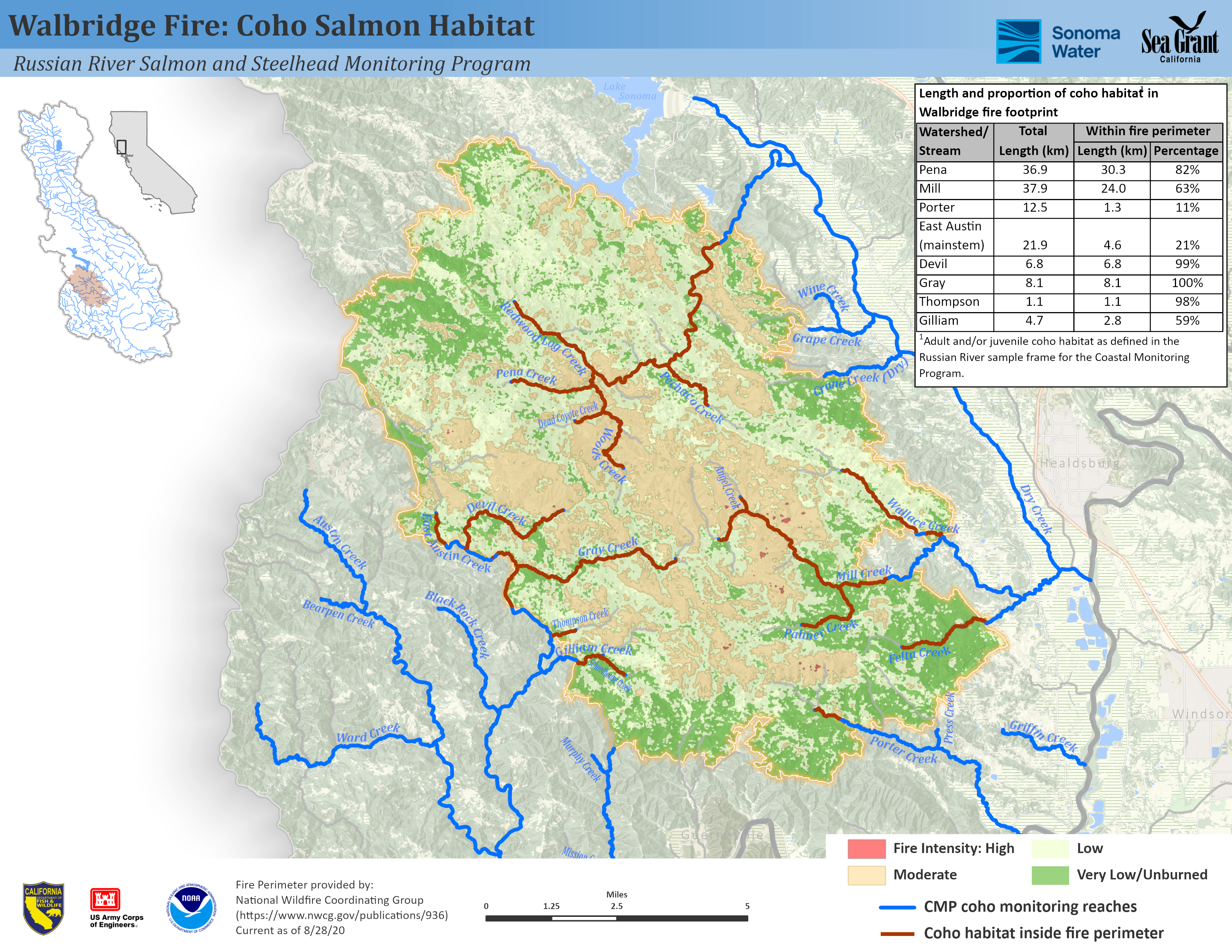 Sufficient year-round flow is a rare and valuable commodity in Russian River streams, where low summer streamflow is a bottleneck to salmon and steelhead recovery.  One way to evaluate fire impacts in relation to habitat value for rearing fish is to compare the length of each stream where burning occured to late-summer streamflow conditions in a relatively average water year, like 2018.  The following map shows the fire footprint overlaid with late-August to late-September 2018 flow conditions (see Wetted Habitat Assessments for details on how stream conditions were documented).  While we do not have data for every stream, it is clear that a substantial portion of the habitat with perennial flow (shown in blue) was within the fire footprint. In Mill Creek, for example, you can see that the highest quality summer rearing habitat in the upper watershed was disproportionally affected, with 75% of the perennial (blue) stream reaches within the burn area. 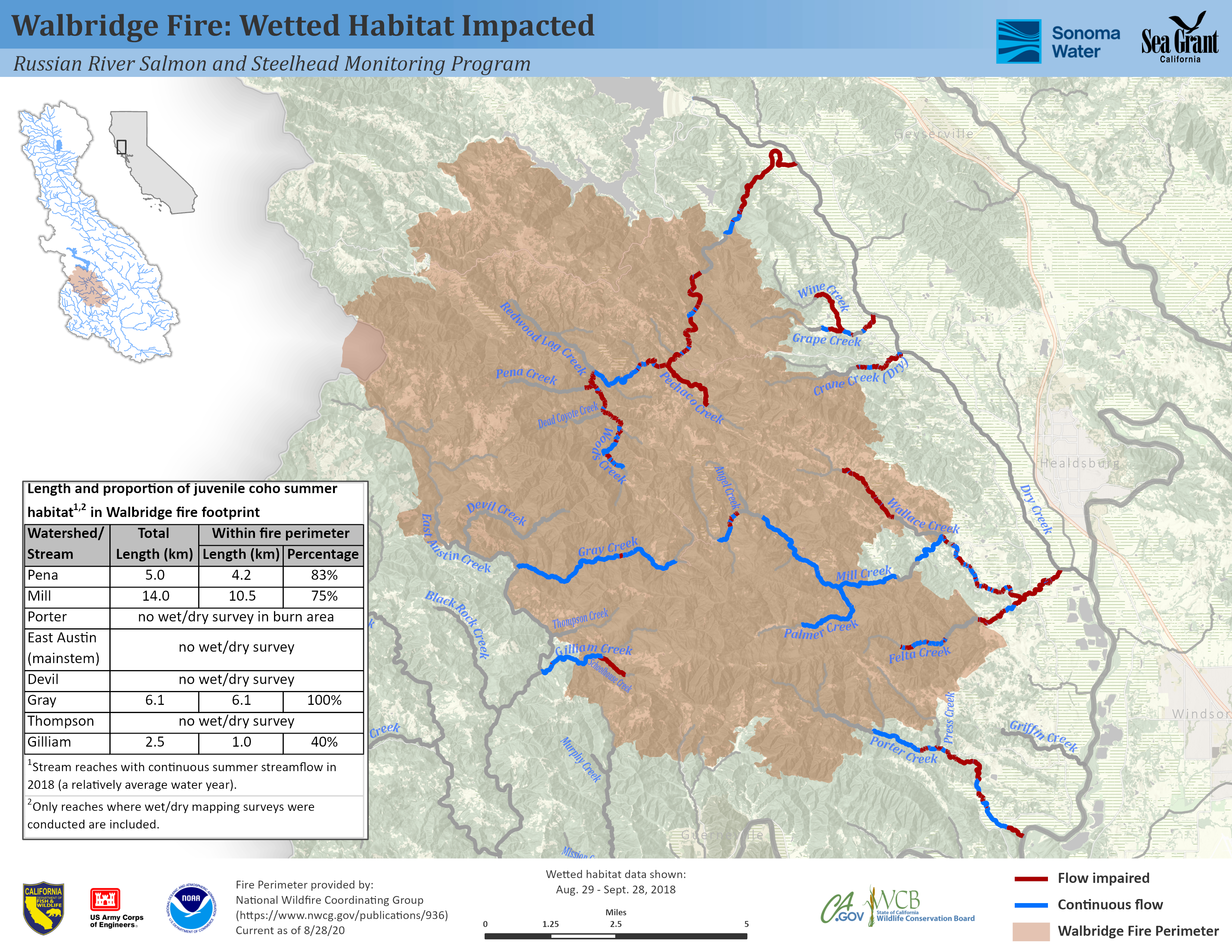 Despite the challenges that fire poses to our community, we hope this will be an opportunity to learn more about the role of fire on the landscape and the resulting impacts to our local stream ecosystems. 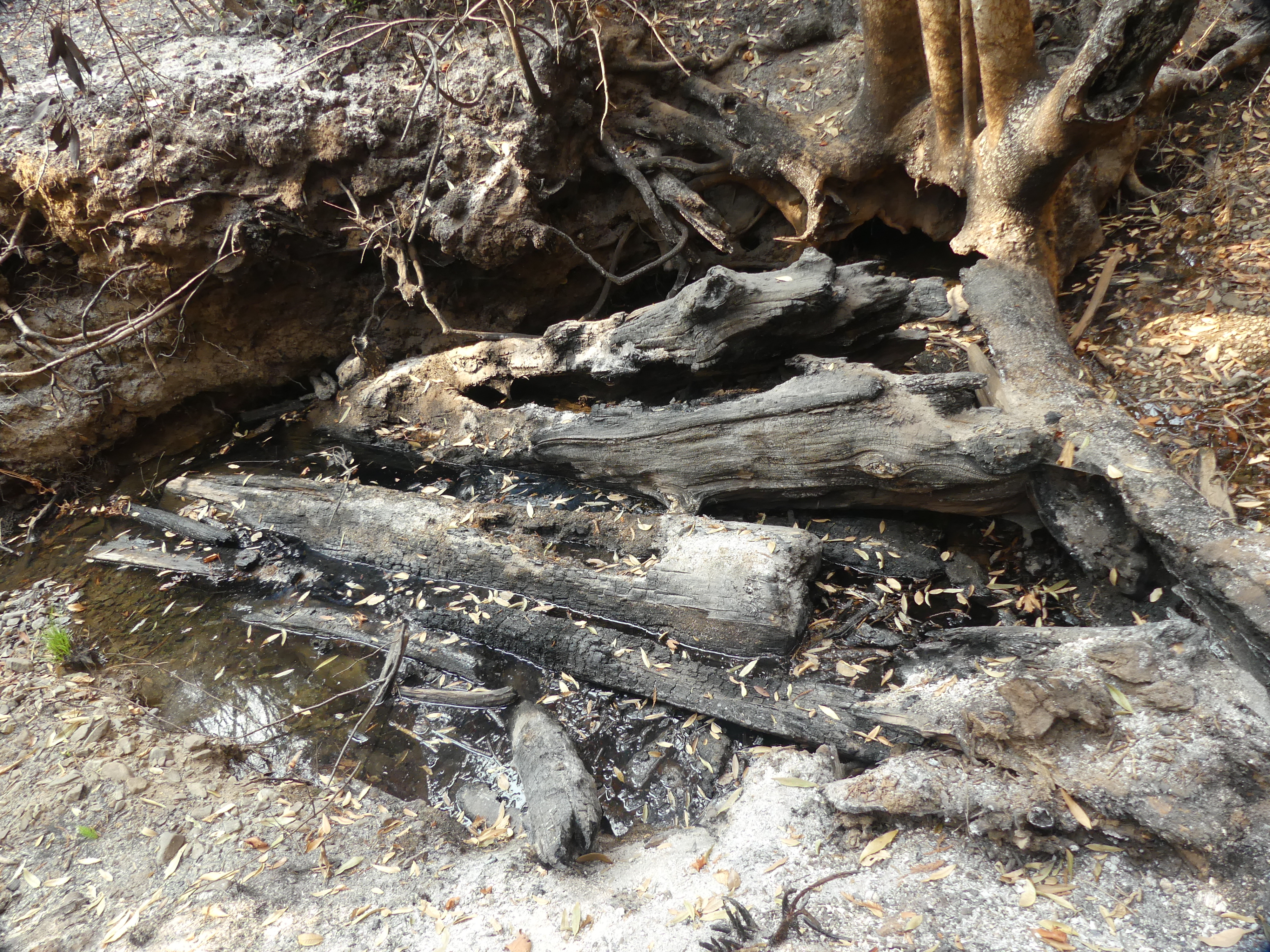 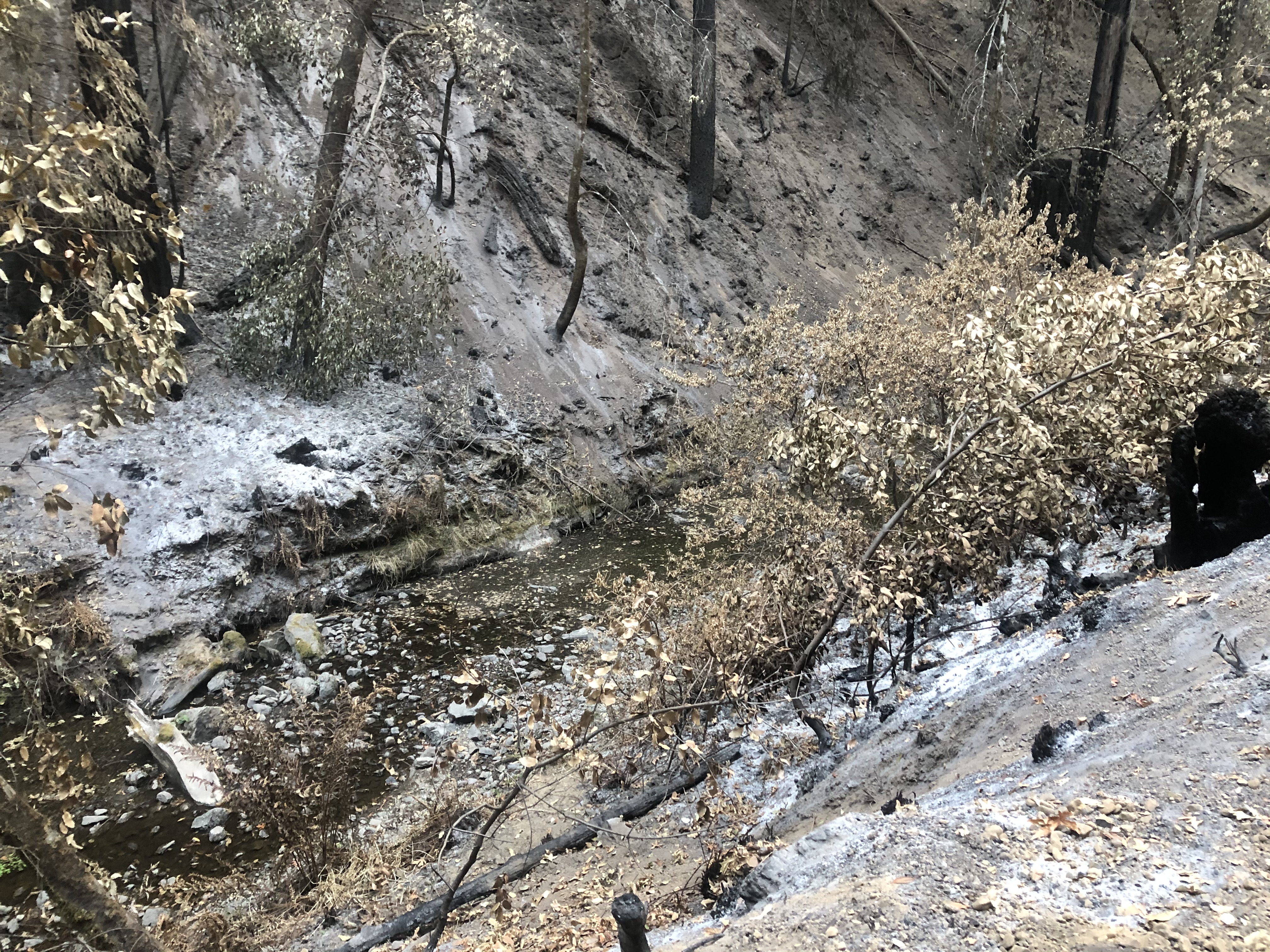 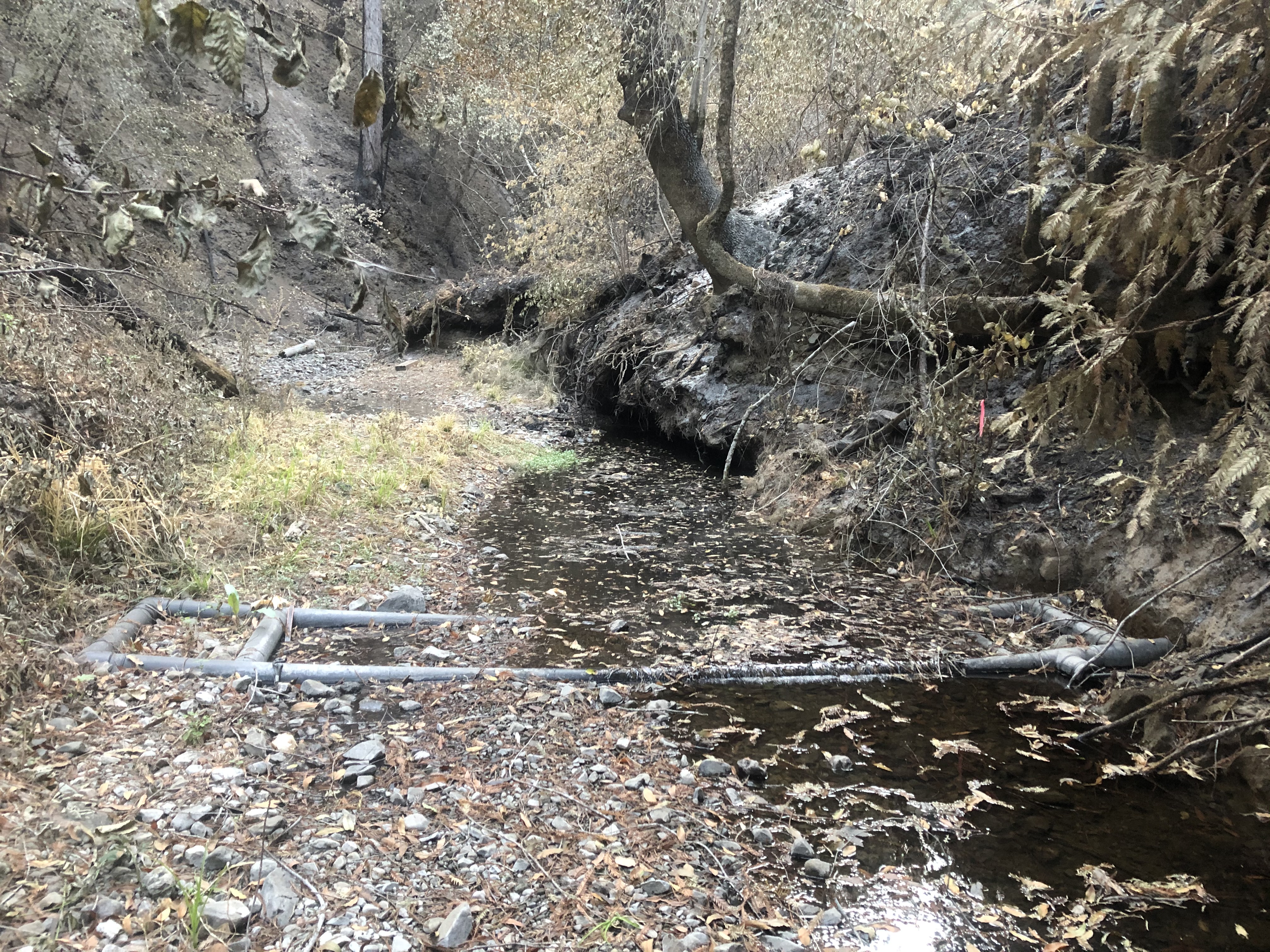 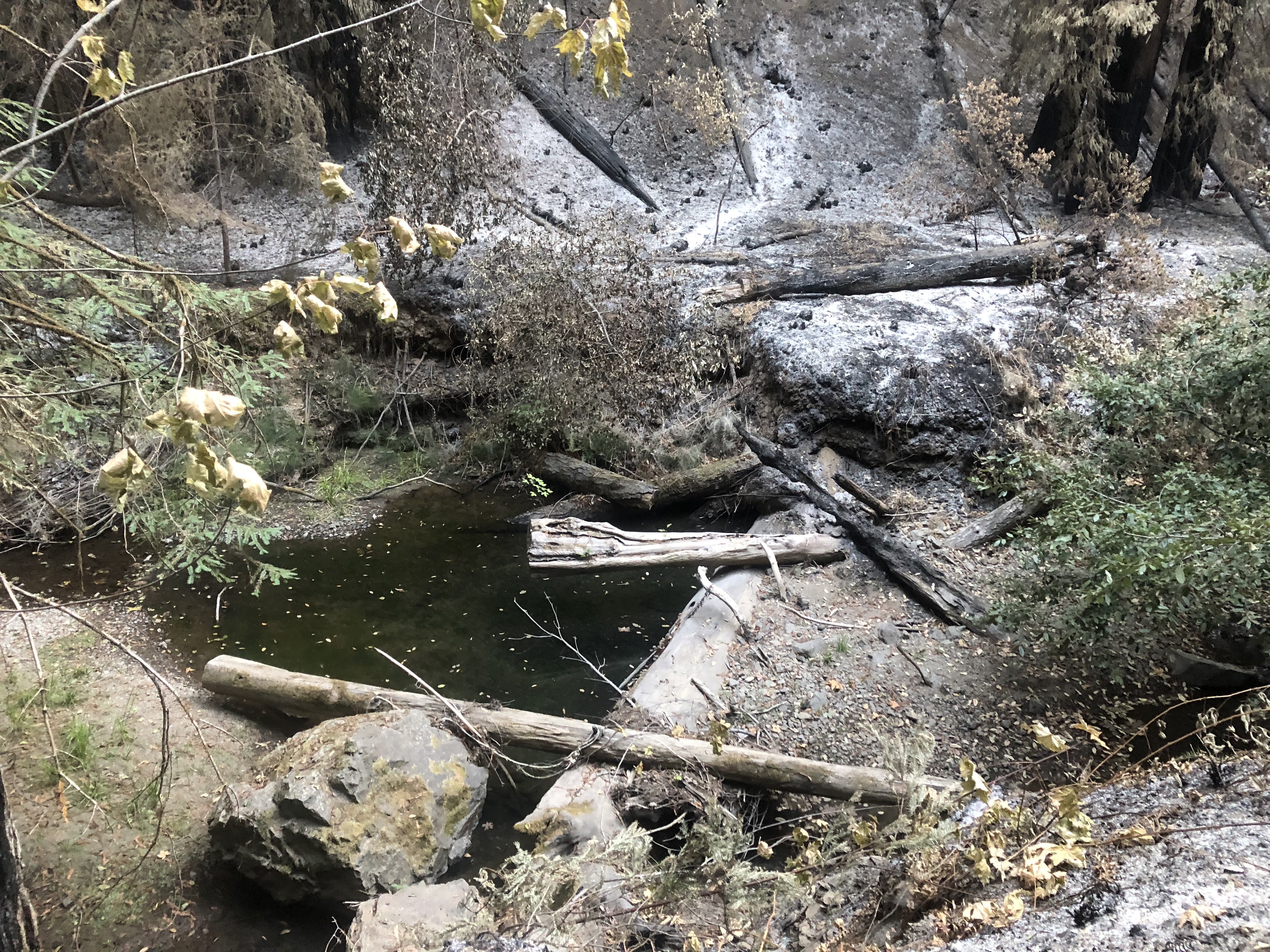 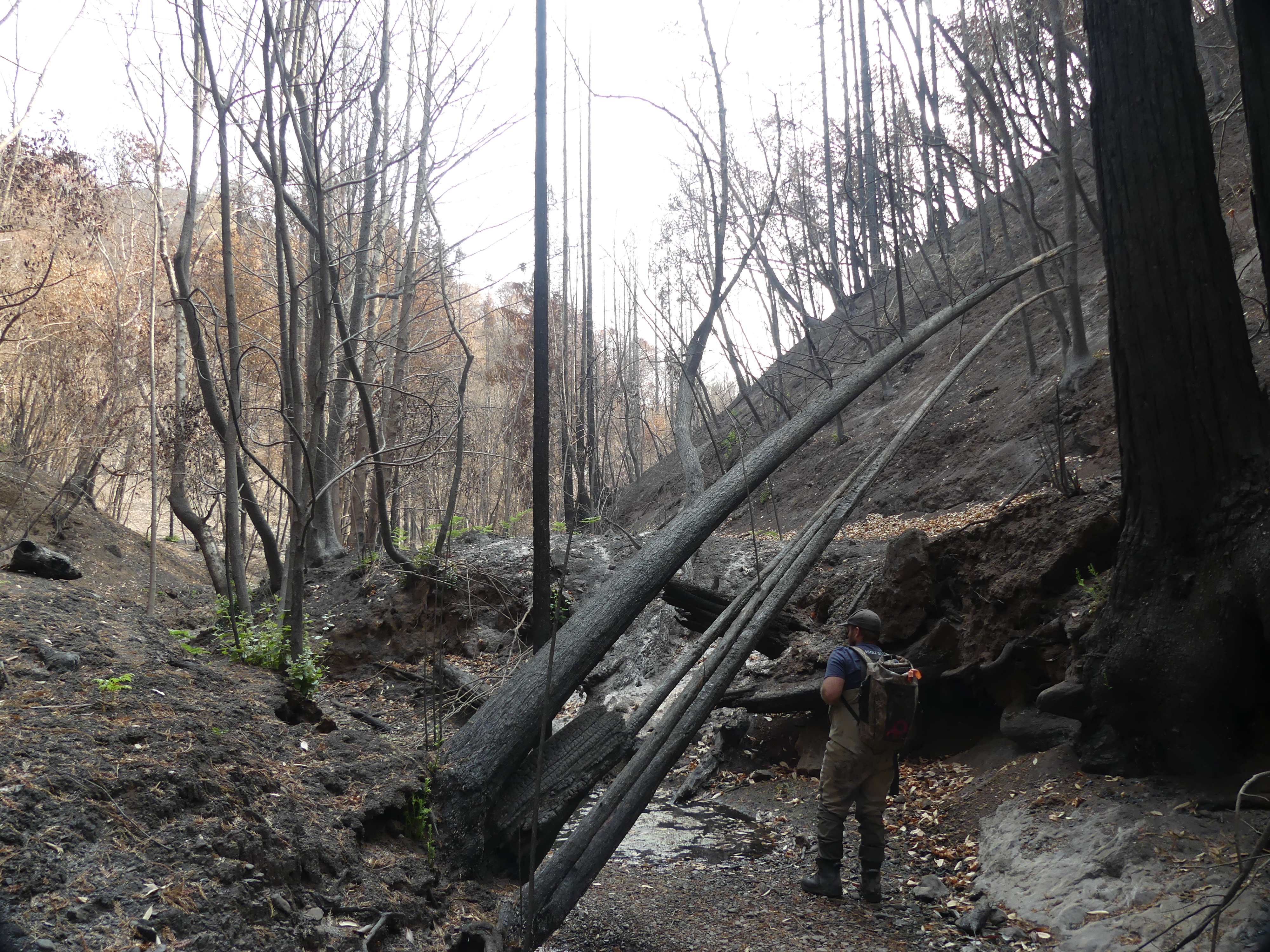