Insufficient summer streamflow is the single biggest limiting factor to recovery of Russian River salmonid populations. By late summer, many of the stream reaches where juvenile coho and steelhead are rearing become intermittent or dry, leading to high mortality rates. Sea Grant has been documenting late-summer wetted habitat conditions in relation to fish distribution on high priority tributaries since 2012. Our biologists document wetted habitat available to fish during the driest time of year, then overlay the resulting maps with adult spawning observations from the previous winter and juvenile fish observations from early summer to determine the impact of stream drying on salmonids. 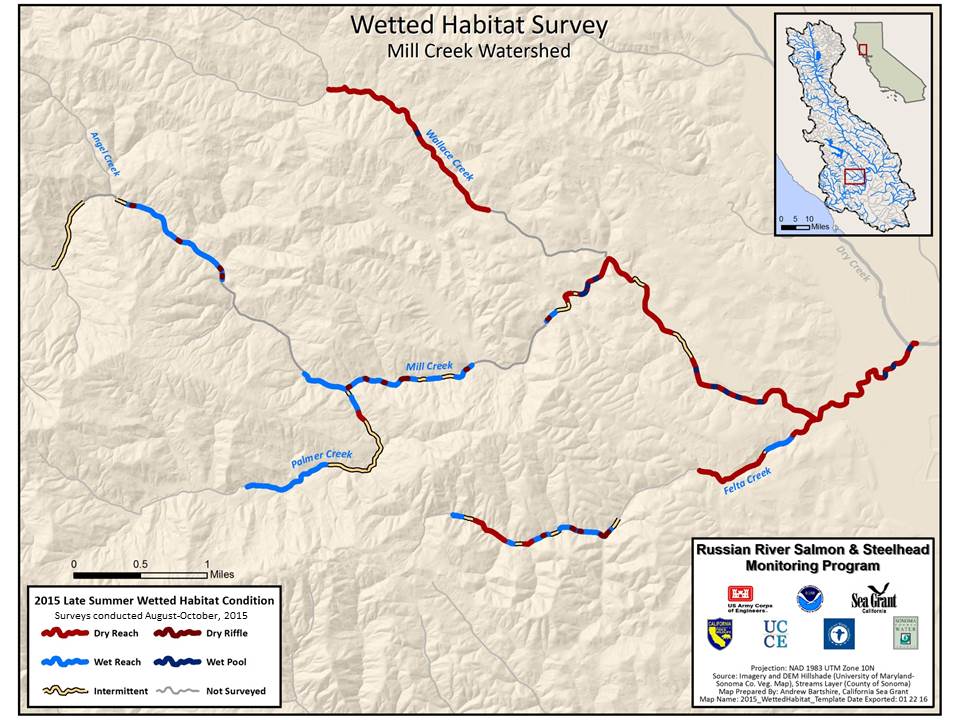 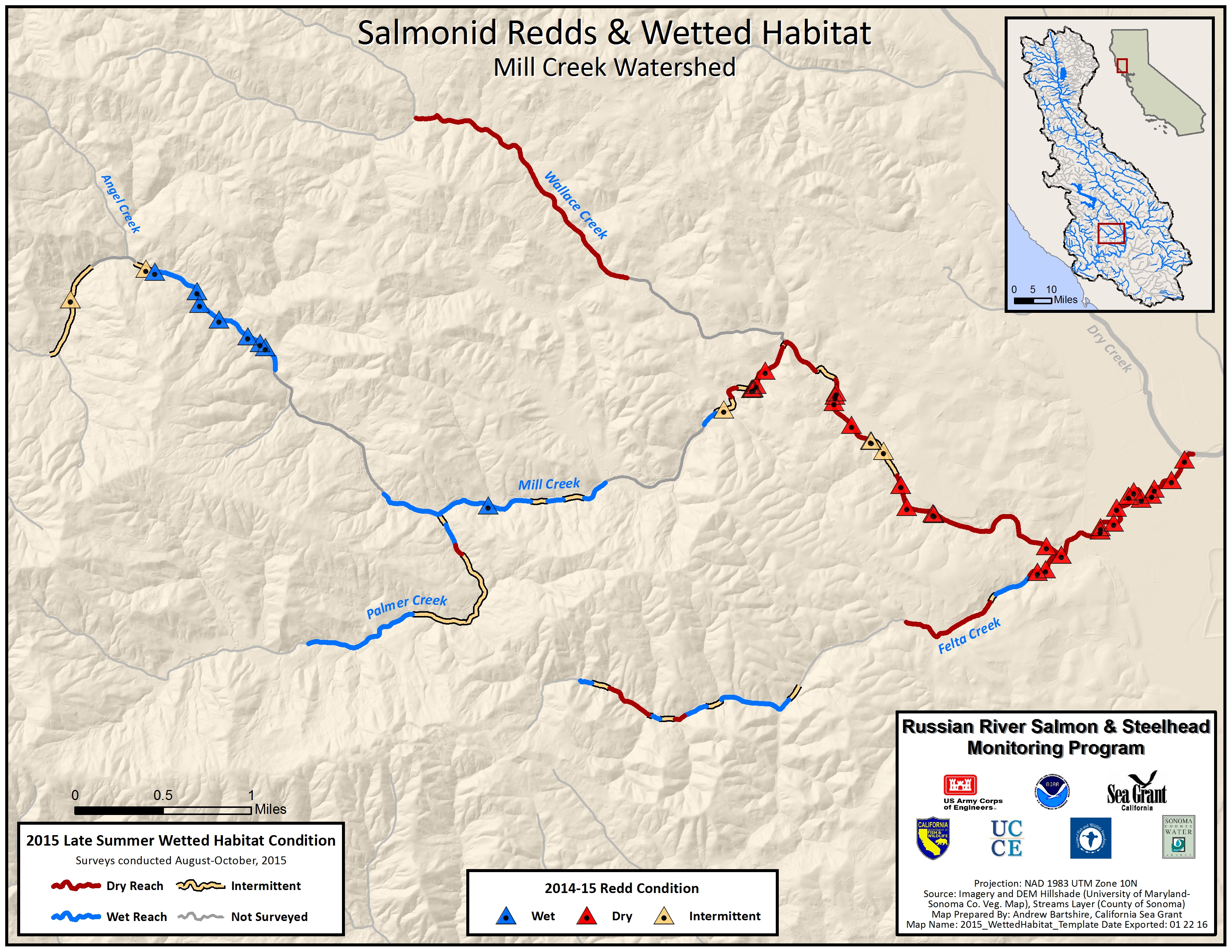 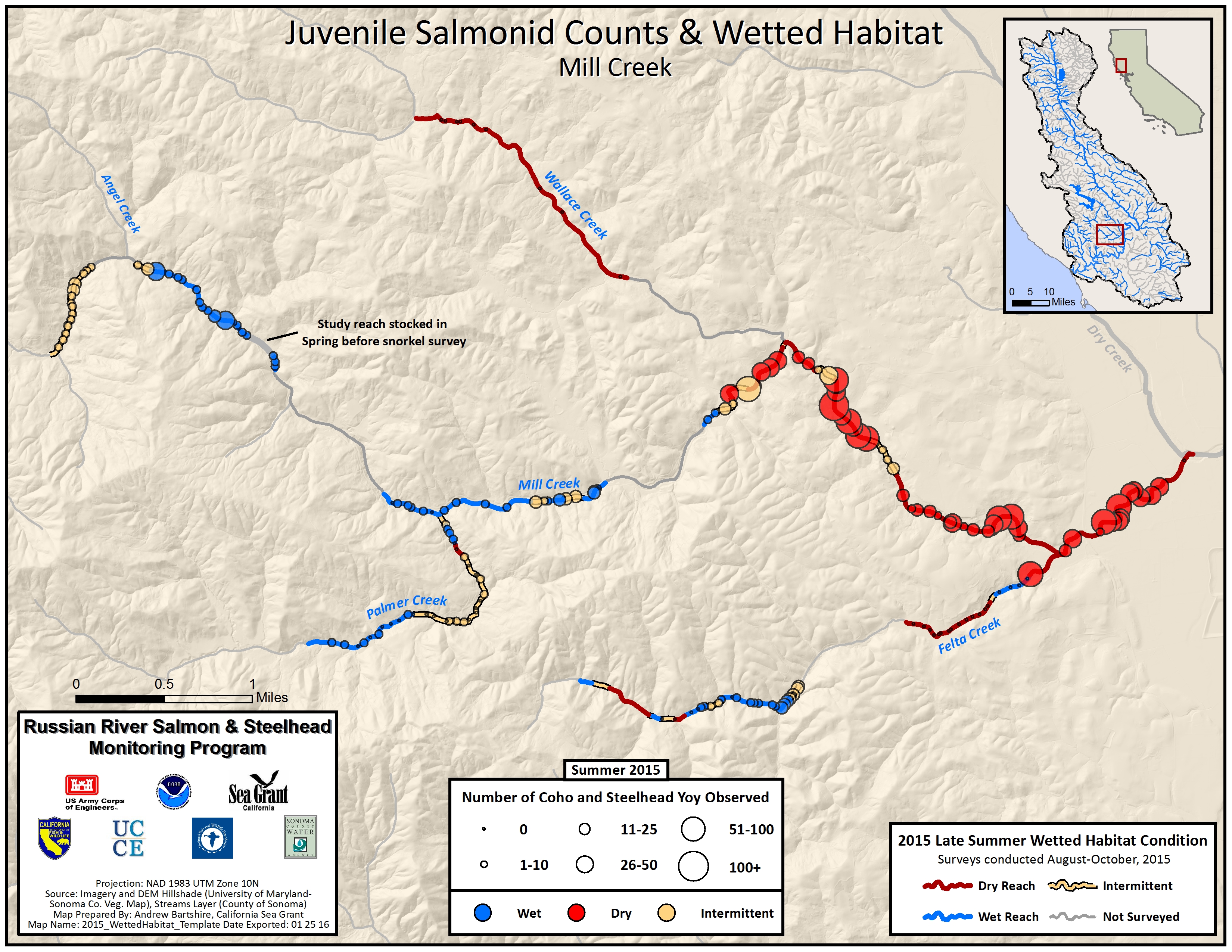 The maps above show 2015 conditions for Mill Creek and its tributaries. Only 17% of the locations where salmon and steelhead spawned and 14% of the spots where young fish were observed earlier in the summer remained wet all season. On average for all 14 streams surveyed in 2015, the driest year in recent record, only 39% of the habitat where fish were rearing remained wet into September. Maps for each survey year can be found under Downloads and the 2019 data is available on our web portal.

In 2017, we received a three-year grant from the Wildlife Conservation Board to conduct wet/dry mapping on Dutch Bill, Green Valley and Mill creeks at two-week intervals over the summer season. Stream condition maps from the 2017 and 2018 seasons can be downloaded in pdf format, and those from 2019 can be viewed on our interactive portal. You can learn more about the field component of this project in our Going With the Flow blog post. Researchers at UC Berkeley's Grantham Lab then used those data to build a predictive model of surface water recession to help guide resource management decisions.

We convened two meetings to discuss project results, as well as to highlight the work of several additional organizations engaged in efforts to evaluate and address summer flow impairment in salmonid rearing streams within the watershed. You can view presentations from the March 2019 meeting and video of the October 2020 meeting for details.