Southern California has been experiencing the most extensive marine invasion ever seen in the area, along the coast and at the Channel Islands. Nonnative seaweeds have taken over areas where native seaweeds once occurred, including the iconic giant kelp beds off California.

Culver explained that the invading nonnative seaweed, Sargassum horneri, has been dubbed the 'devil weed.' It has moved into areas where native giant kelp once flourished. The recent finding of Asian kelp out at Anacapa Island has raised further concerns about nonnative seaweeds replacing natives including giant kelp.

“Nonnative seaweeds and other marine invasive species are often accidentally spread through human activities,” Culver said. “Being knowledgeable about them and taking certain actions can help to prevent further spread of invasives.”

To raise awareness and help prevent the spread of the two saltwater invaders, Culver and UC Santa Barbara doctoral candidate Lindsay Marks, along with other project partners, have developed several outreach materials to help ocean users identify and report sightings of the two seaweeds.

In collaboration with UC Santa Cruz’s Multi-Agency Rocky Intertidal Network group, they created MarineInvasives.org, a website that includes a reporting system and more information about invasive seaweeds. The public can document observations of devil weed and Asian kelp on the website or a corresponding iNaturalist.org phone app, which help scientists and managers understand the extent of the invasions. Citizen scientists can also access an instructional video, identification guides, seaweed pressings, posters and flyers on the website.

“Invasive species can have a long-lasting impact on native communities, and we need to minimize this impact as best we can by limiting their spread,” said Marks.

California Invasive Species Action Week, sponsored by California Department of Fish and Wildlife (CDFW), is a statewide event that provides the public with opportunities to learn about and take action against non-native plants and animals that harm our environment and the native species that live here. 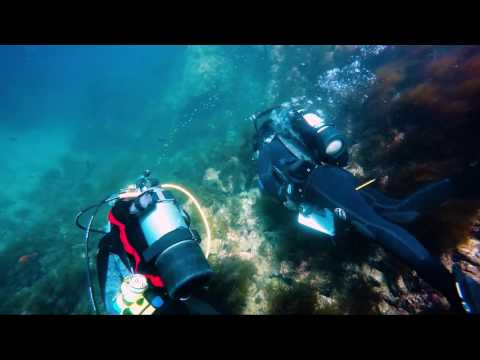