Alicia Amerson: The art of briefing a principal

The statements, findings, conclusions and recommendations are those of the author and do not necessarily reflect the views of the U.S. Department of Commerce, NOAA or any of its sub-agencies or sub-awardees, including NOAA Sea Grant and the California Sea Grant College Program. 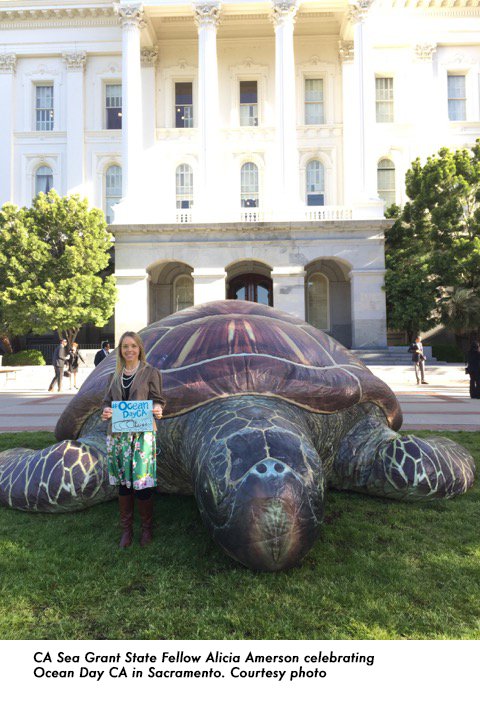 While preparing for the Sea Grant State Fellow placement interview for the Lieutenant Governor’s office, I quickly realized that if I wanted this specific opportunity, I needed to come to the table with a proposal to develop a policy over the course of the year. This was the first time the Lt. Governor would host a Sea Grant State Fellow and this was my first time working in politics, so I was eager to learn how policy is made. During the 20-minute interview, I confidently stated: “I have a policy idea I want to pursue this year.” As soon as the words came out of my mouth, the Chief of Staff put both of his elbows on the table, leaned in, and asked me what it was. This was the magical moment when I knew this would be my fellowship placement.

The foundation of what I do as a Fellow in the Lieutenant Governor’s office is based on pursuing pertinent issues that impact California’s coast, ocean, marine life, humans, and environment. Once I find a topic, I prepare a brief for the Lieutenant Governor to review. The diversity of topics is endless, but the Lieutenant Governor is only one man after all, with millions of people demanding his time and attention, so that's something I need to be continually mindful of. Maneuvering through the first month - and now into the sixth month - three major themes have revealed themselves, which has greatly added to the success of my pursuits:

Currently, one of the most critical issues to whales in California waters is entanglement in fishing gear. Over the past three years, there has been a significant increase in entanglements and yet no funding has been provided to the emergency disentanglement teams helping to save these whales. So I decided that my personal fellowship project would include this topic. First, I had to develop a project outline that would align with the Lt. Governor's views, and one that could be executed within the given time frame of the fellowship. One day, while I was preparing this brief, the Chief of Staff mentioned this concept called the “Art of Briefing a Principal” and I quickly asked who wrote the book. He laughed and said he just made up the term. And yet...it was so appropriate!

The art of briefing a principal is simple, but not always easy. The basic brief package includes the elevator speech, background, facts, supporters, opposition, and action items. The art of the brief is also about how intriguing and important the issue is, a concept that needs to be carefully painted in the words of the brief. For a creative person, a brief like this can be fun to put together, but for a scientist, it can be a terrifying balancing act.

The four questions to ask when preparing for a natural resource or environmental brief for a democratic legislator includes the following: 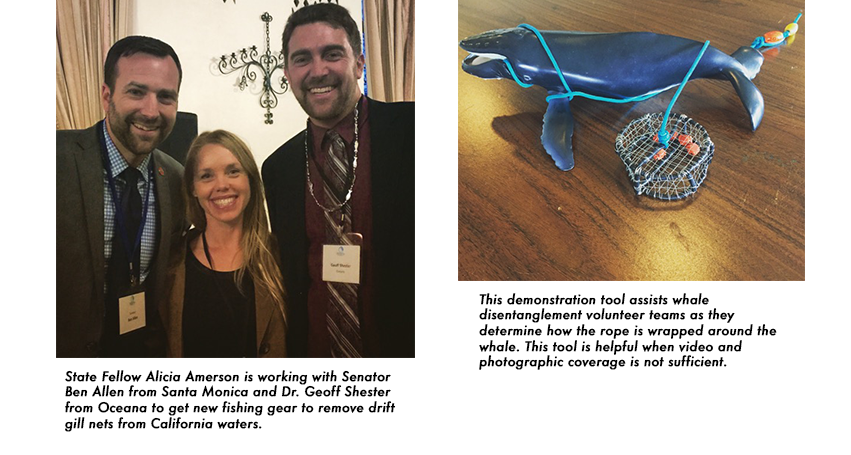 Whale entanglement is primarily caused by the Dungeness crab fishery, which is a fixed trap fishery. Monetarily this fishery is the largest fishery in the state of California, as is the large number of fishing jobs it creates. Dungeness crab fishermen are currently working to mitigate both entanglements and their contribution to ocean debris through legislation introduced by Senator Mike McGuire - legislation designed to protect whales and pick up lost crab pots at the end of the fishing season. But the legislation does not provide funding for whale entanglement emergencies. So this proposal to help fund the disentanglement teams was part of a larger brief I prepared for the Lieutenant Governor.  And it turns out that whale entanglement is like a puzzle where all the pieces must fit together, since it has many stakeholders and a variety of federal and state regulations that manage fisheries and marine mammals.

One of the topics proposed to address the entanglement issue was to secure $100,000 for whale disentanglement teams, since this is one of the quickest ways to make an initial impact to the issue. Responding to already entangled whales is only a Band-Aid for the real issue, but until we can determine how to prevent this, we have an obligation to support emergency teams with adequate funding. The only question left was where would I find the funds to help whale disentanglement teams?

This part was very interesting because I was able to work with senators, assembly members, their staff, state budget analysts, NGOs, and state departments. In the very short time frame of two months, we were able to find a funding source for a $100,000 budget, find a budget sponsor - Assembly Member Mark Stone - and get the budget item in front of the Assembly Committee for Natural Resources before the 2016 budget session closed. Fortuitously, the committee is chaired by Assembly Member Richard Bloom, who is also the champion for the Orca Protection Act, which will stop artificial insemination of, and entertainment provided by, killer whales in captivity in California.

After passing the Assembly Committee with a 5-0 vote, we received news that Senator Mike McGuire sponsored a letter asking for the Senate Budget Committee chaired by Senator Mark Leno to dedicate $100,000 for whale disentanglement. The Senate Budget Committee passed the budget item. After passing both, the House and Senate, the budget item became part of the state budget (SB 826) that was signed by Governor Jerry Brown. 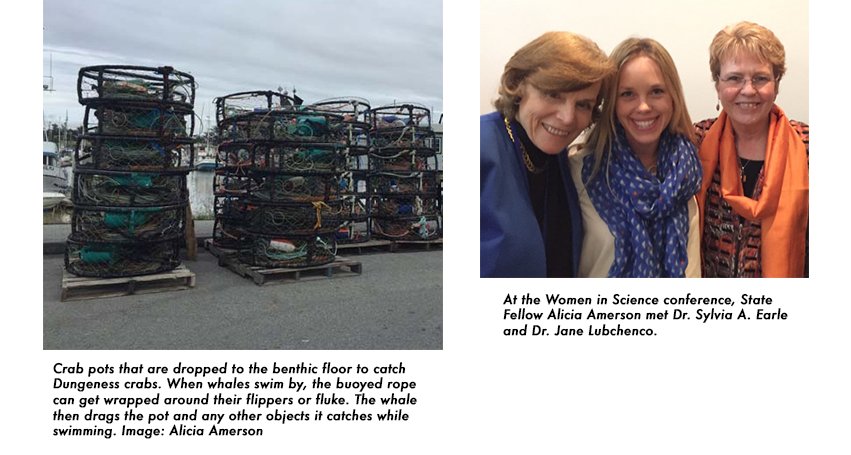 When preparing discussions, I knew the task required that I know my audience and their interest level in whales, fisheries, and budget items. I often used Google to look up people, and I made sure I knew which districts they represented, who they worked for in the building, what projects they cared about if they were working as a lobbyist, and any other information that was available. As a Fellow, I went to a variety of dinners and events where I met most of the people I would work with on this issue.  And if I did not meet them at an event, I was connected through the people I met while networking.

As a result of securing this funding, the critical issue of whale entanglement has caught the attention of legislators and lobbyists. Now there is a proposal to have a full hearing on the issue in the fall, and possibly propose legislation for a state program.

As Sea Grant State Fellows, if there is an issue we really care about, we can make a significant difference, and we should do our part to make the connections. I am grateful to all of the people who played a part in making this critical issue a priority, and for helping to fund the volunteers who risk their lives each time they go to sea to save an entangled whale.

Alicia Amerson is the first California Sea Grant State Fellow to be placed in the Office of the Lieutenant Governor of the State of California. Amerson earned a B.S. in biology from Eastern New Mexico University in 2002, and in then 2004 she earned her Certified Project Manager credentials and worked for the Los Alamos National Laboratory on the environmental remediation project to clean up the toxic waste produced during the Manhattan Project Era. She earned a master’s degree from the Scripps Institution of Oceanography at UC San Diego in 2015. Amerson currently lives in Midtown Sacramento with her two adorable Australian shepherds. 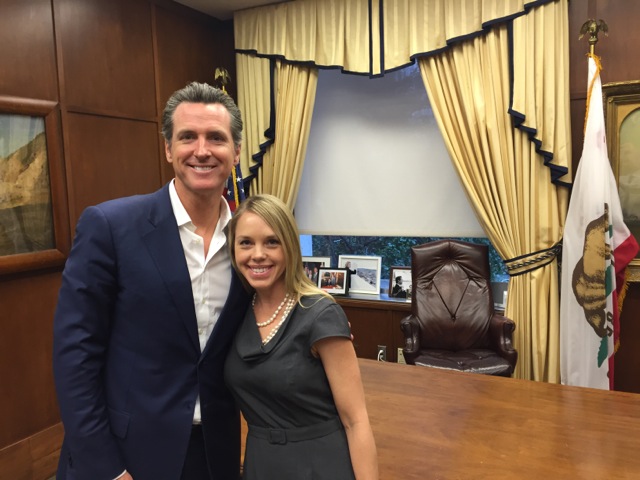