In the Russian River tributaries, salmon and steelhead returns are winding down for the season but our monitoring work is busier than ever. All salmonids spend time in their natal creeks before going to the ocean, although the amount of time varies by species. Chinook spent the least amount of time in freshwater, leaving the same year they hatch, and steelhead can spend many years in the streams before migrating. Coho only spend one year in freshwater, and throughout California, these species can begin their migration as early as October and have been documented leaving as late as June. The exact timing varies by environmental conditions and even among individual fish, but the peak of the smolt outmigration is typically in early May. 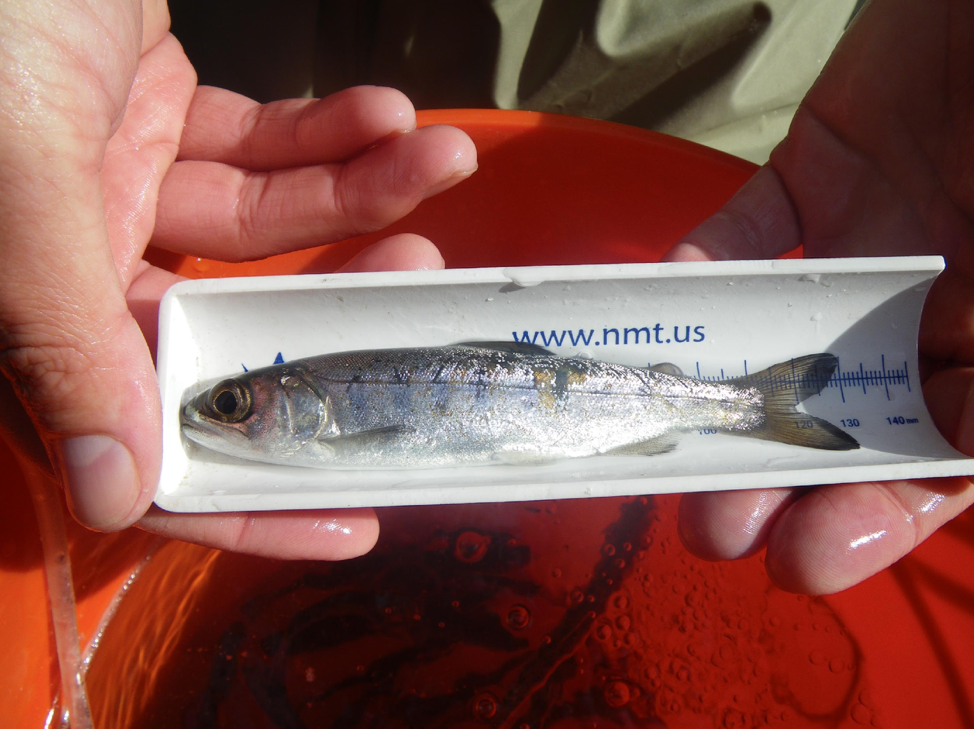 A natural-origin coho smolt captured in the trap

As we wrap up the tail end of monitoring for returning adults, we transition to counting smolts, the young salmonids headed to sea. As the smolts prepare for ocean life, their appearance changes. They lose their parr marks, or the dark bars on their sides, and become silvery to match the colors in the ocean. At the same time, they undergo physiological changes that prepare them for life in salt water. By the time coho and steelhead begin to migrate, we’ve had two chances to document them; as eggs in a redd during the winter and as juveniles in the summer. The spring is usually the last time we see these fish unless they are fortunate enough to return as adults.

The coho smolts we catch at our traps in the spring of 2019 are offspring of adults that spawned in the winter of 2017/2018, and most of those that survive will return as three-year-olds in the winter of 2020/2021. The information we collect on these out-migrants, such as size, number, and whether they were born in the wild or in a hatchery, help us estimate how many fish are surviving the winter and leaving the system, as well as the growth of hatchery fish released in the fall. 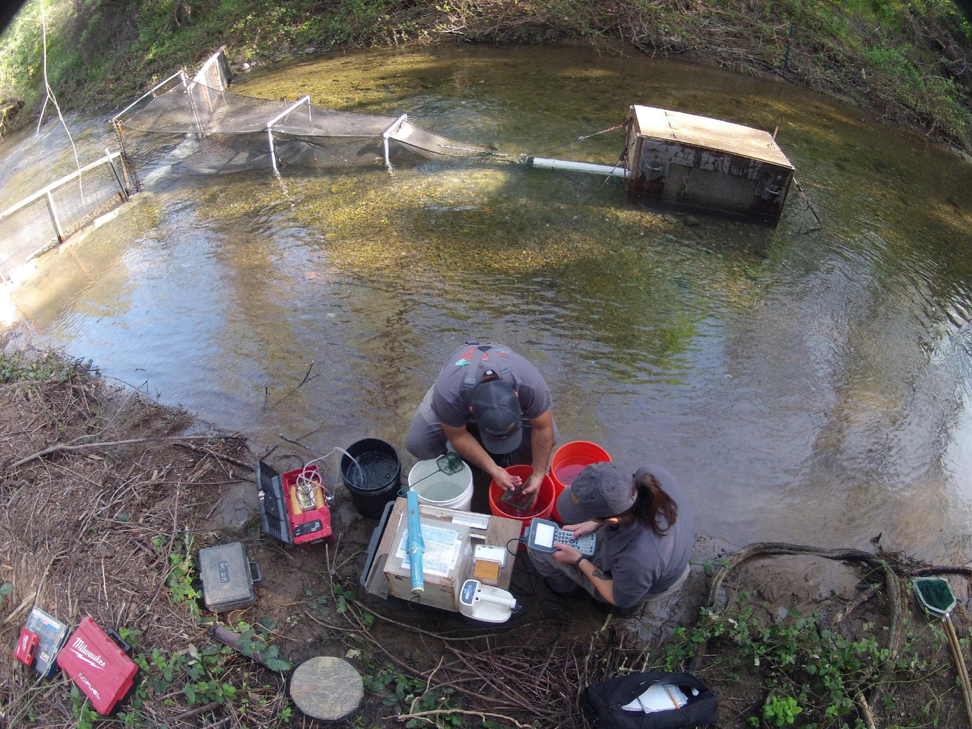 After catching all the fish from the wood live box, Will Boucher and Elizabeth Ruiz count and collect data from the day’s catch. Notice the color-coded buckets for organizing fish, the blue coded-wire scanner and white PIT scanner, and grey field computer. After processing and releasing fish, the crew cleans the nets on the funnel trap, locks it, and puts all the gear away before heading to the next one.

Between March and June, we operate a smolt trap on three different tributaries. These funnel or pipe traps span the channel and direct fish into a live box, which we check each day, even on weekends—and visiting them every day is similar to opening a gift— we never know exactly what we’ll get. In addition to the native salmonids, we catch a variety of native and non-native aquatic species including frogs, turtles, lamprey, a variety of minnows, sunfish, stickleback, freshwater shrimp, and sculpin. Trapping season is an amazing opportunity to become familiar with the biodiversity in our freshwater systems. 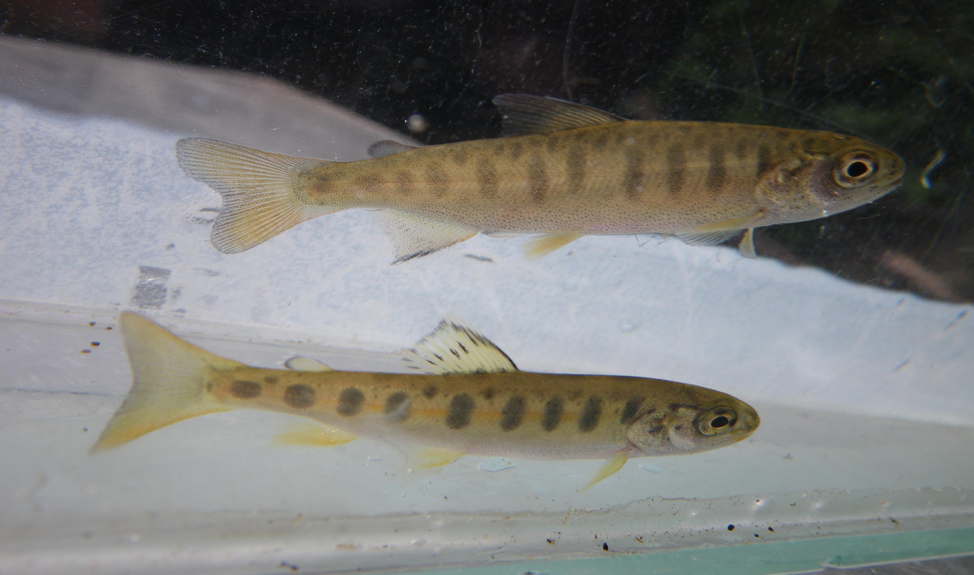 Chinook salmon parr. For juvenile fish, we rely on fin and body shape for identification. 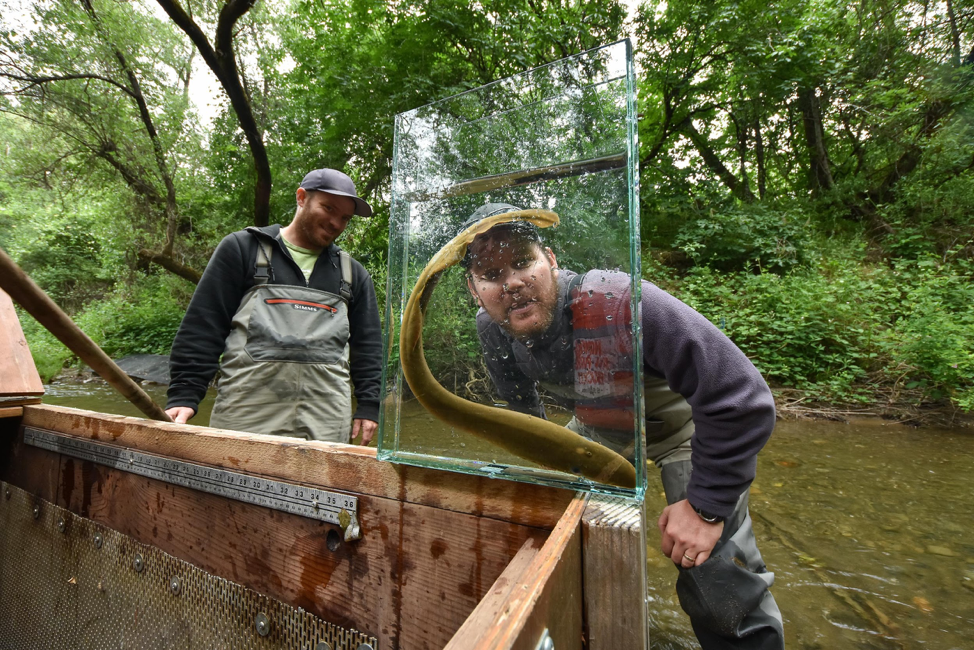 Pacific lamprey adults occasionally show up in the traps. These fish are also anadromous and return to freshwater to spawn. Photo: Joshua Asel

We identify and count all of the non-salmonid species before releasing them downstream of the trap. The salmonids we identify to species, which is trickier to do when they are small than when they’re adults. Then we scan them for passive integrated transponder (PIT) tags as well as coded wire tags. PIT tags are similar to the microchips we use for our pets, and coded wire tags are uniquely numbered pieces of copper wire implanted in the snout of the fish. All hatchery fish have snout tags, and a percentage also have PIT tags implanted in their bodies.

PIT technology is incredibly informative because it tells us about fish on an individual level. We have channel-spanning antennas installed in a number of Russian River tributaries, as well as the mainstem, that record the unique tag numbers associated with PIT-tagged fish that pass over the antenna’s transceiver field. Barring any technical issues, these antennas operate constantly. We also use the number of detections from PIT antenna arrays immediately upstream of our smolt traps to estimate our trapping efficiency. 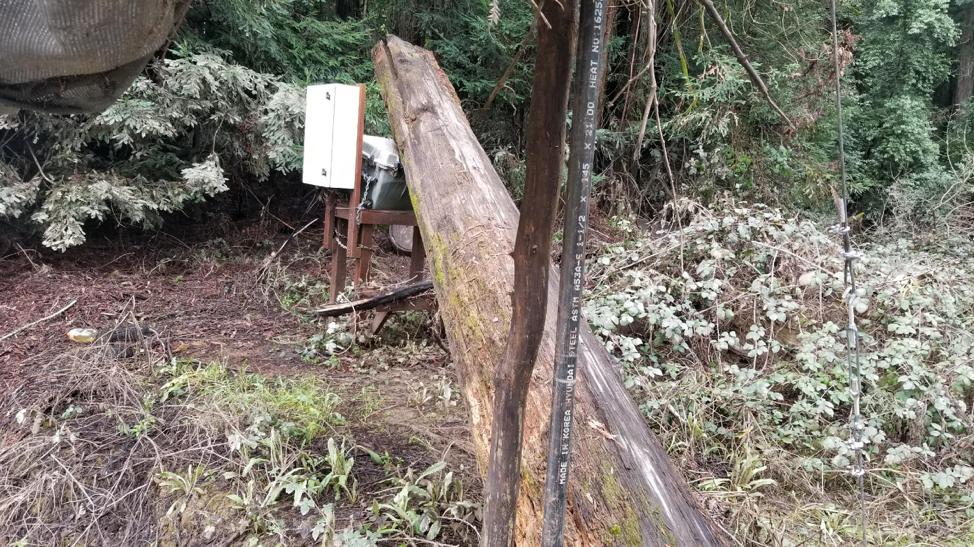 On occasion, we experience some technical difficulties at our antenna arrays. The high water in the winter of 2018/2019 placed this redwood log on top of our battery box. Unfortunately, the electronic equipment we use to record the PIT numbers, housed in the white box, was also flooded, rendering this site temporarily nonfunctional.

Once we’ve scanned each fish for the two different tags, we then anesthetize, weigh, and measure them. We also implant PIT tags into a percentage of both natural- and hatchery-origin fish and record that unique number with the fish’s measurements.

When all the data is collected and the fish have recovered from the anesthesia, we send them on their way downstream. Before they go, we wish them luck with surviving the journey and time in the ocean, as well as their trip back upstream to spawn. After all of the excitement of surveying for adult salmonids and their redds, getting up close and personal with smolts is not only a great privilege, but a critical opportunity to collect data on our threatened and endangered fish species. 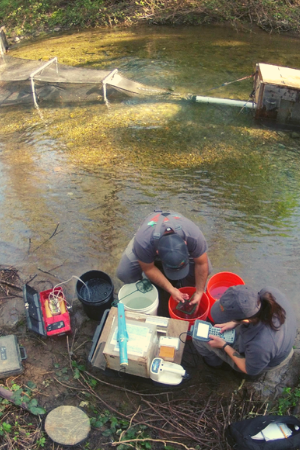