Farming shellfish by the seashore: a Q&A with aquaculture specialist Kevin Marquez Johnson

Sea Grant Extension Specialist Kevin Marquez Johnson recently joined the California Sea Grant extension team. In this Q&A he explains how his research on clams and oysters can help make shellfish aquaculture resilient in the face of climate change.

Can you tell me a little about your background?

I went to Cal State University Monterey Bay, where I studied biology and had some really amazing mentors who helped encourage me into research. I'm a surfer, and finding a way to connect what I do for fun to what I do for work was just something I couldn't pass up.

You’ve been back in California for around six months now — what are you working on now with California Sea Grant? 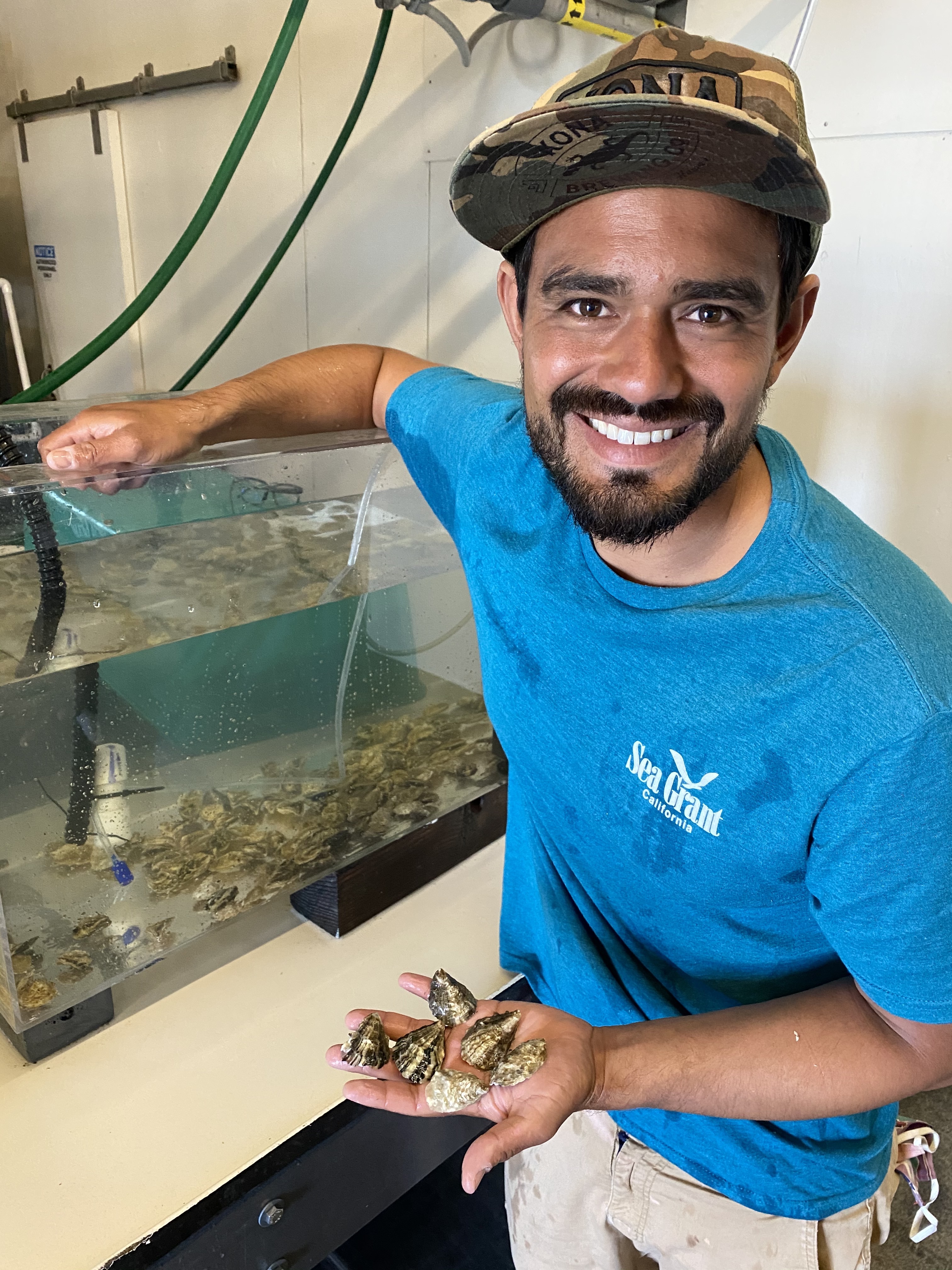 Kevin holds Pacific oysters that were brought to the Cal Poly Pier to determine growth rate in ambient conditions.

One of the projects that we’ve gotten funded is developing aquaculture methods for Pismo clams, which are a local species and known for being tasty. The lead project investigator is Dr. Ben Ruttenberg at Cal Poly San Luis Obispo. Dr. Ruttenberg and I also work with a grad student, Marissa Bills, who is amazing. We’re going to test out different ways to grow and raise the larvae so that we can set them in a hatchery that can be used for either commercial or restoration methods.

How great would it be if a shellfish farmer out here who currently raises non-native Manila clams could switch to raising and selling native Pismo clams instead? My research is really developing resources and tools so that others can do that work, so we're pretty excited about it.

There’s a lot we don’t know about how adaptable Pismo clams are to changing ocean conditions, like ocean acidification. We have some experiments lined up to see if we can raise them in different conditions to see how viable they are as a commercial species. But either way, the project has really good potential implications for restoration work.

Yes, it’s a big concern. Starting around 2006-2008, the shellfish farmers along the West Coast started not being able to produce seed—small juvenile shellfish to use for farming. That was really clearly linked to ocean acidification. On the West coast, a lot of the really acidic conditions are coming from upwelling [wind-driven events that bring cooler water up towards the surface]. It impacted their ability to raise these larval forms of the bivalves, which is something they’d been able to do for years before that without ever having any issues. And that was really clearly linked to how low the pH is getting now.

What’s interesting about your current research to a non-shellfish farmer? 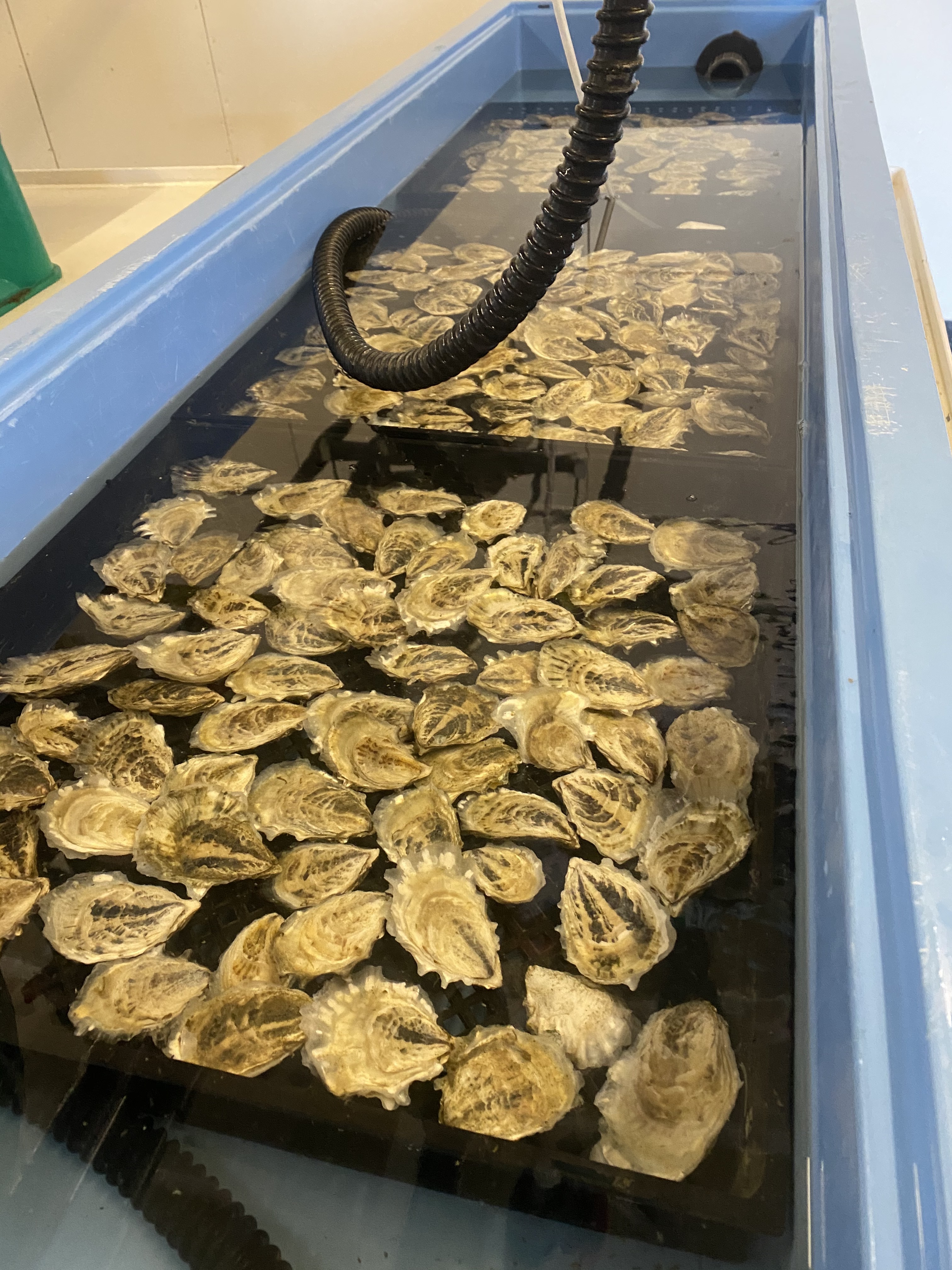 These oysters are being raised in tanks full of sea water at the Cal Poly Pier to measure how fast they grow.

Shellfish like oysters are filter feeders, so they're eating material floating in the water and increasing water clarity. Look at the East Coast at Chesapeake Bay—restoring native oyster beds has had a massive positive impact on the water clarity and quality. I think about Oympia [native Pacific West Coast] oysters and if we can get those restored in our local bays and estuaries up and down the coast, how much that can have a net benefit on those ecosystems and just make them overall healthier.

With Pismo clams, this is a really important species for Central California. As filter feeders, Pismo clams play an important role in the marine ecosystem—but they’re also a part of the region’s culture. Pismo Beach is named after it. They’re also important for Indigenous groups.

Pismo clams are threatened by poaching. Additionally, climate change may redistribute their populations. Being able to get ahead of all of that while they're still relatively abundant—at least the small ones—we can start to develop the methods that allow us to rescue populations if need be.

What’s the big picture of your research with shellfish aquaculture?

We're trying to develop techniques to help aquaculture be successful into the future. I’m also working with Pacific oysters, trying ways to help produce more resilient oysters in the face of climate change. And I’m developing some work around Olympia oysters that'll be aimed at both commercial and restoration work.

I am still educating myself on how best to engage with all the different communities in California that have a long history of managing this species. It's really important to understand that Indigenous people have such a long history with all of these animals. It's important to respect that and come in listening.

I became a new dad this year so I’m thinking about my daughter's future, and whether aquaculture can help produce equitable food resources for different communities in a way that doesn't negatively impact the environment. Actually, a lot of these shellfish aquaculture activities can have a net positive impact on society. So I'm pretty excited about that. 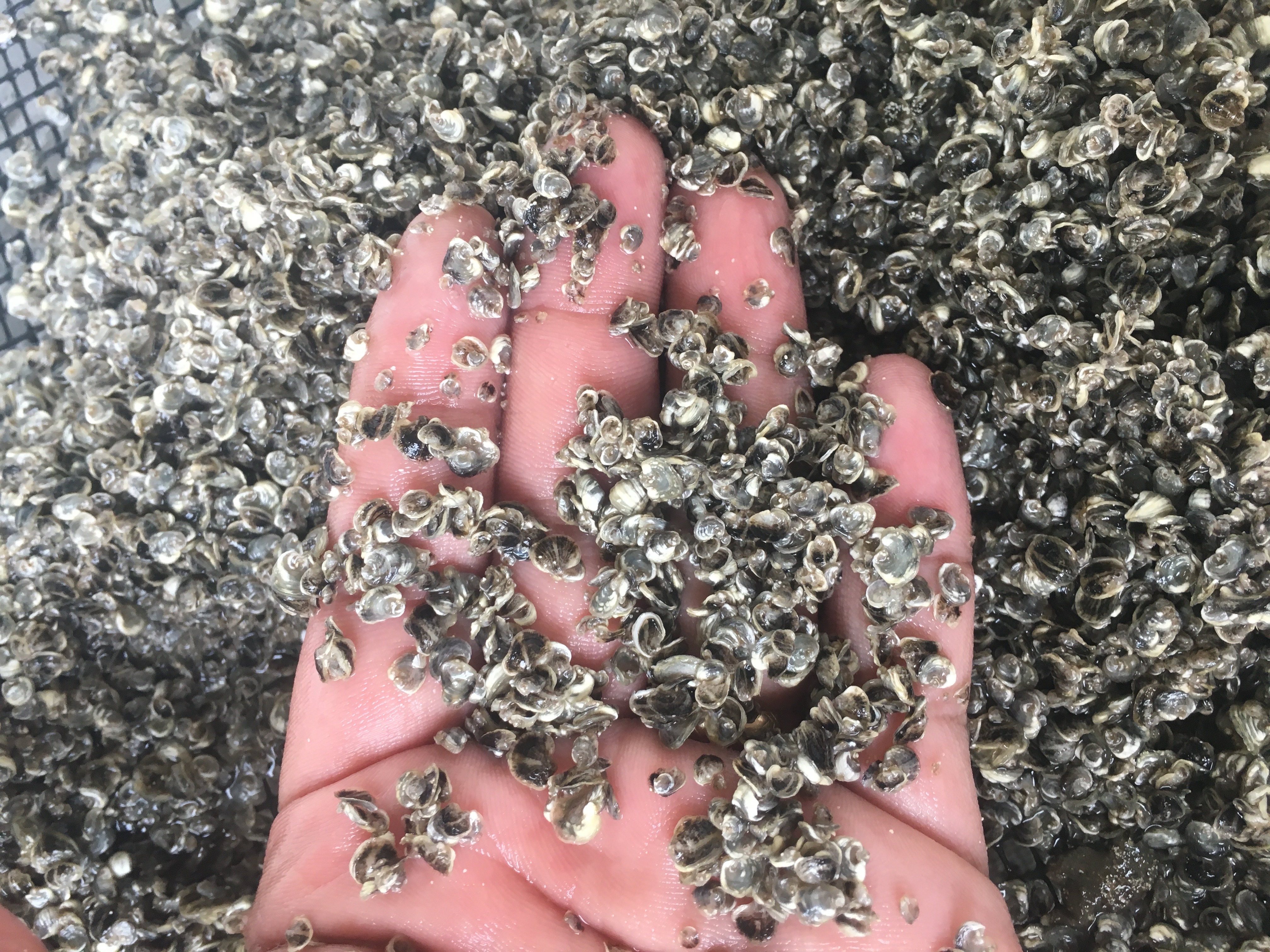 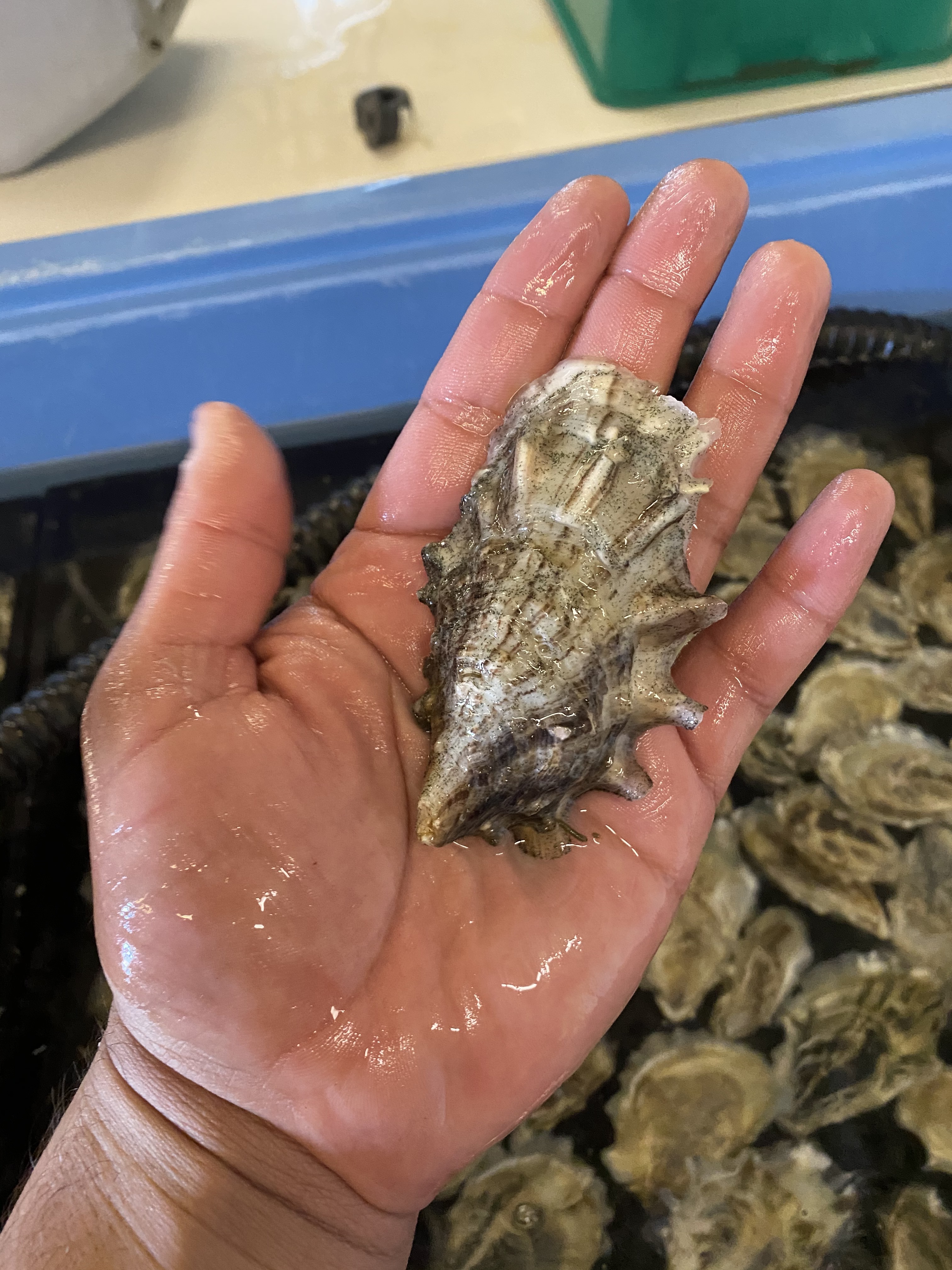 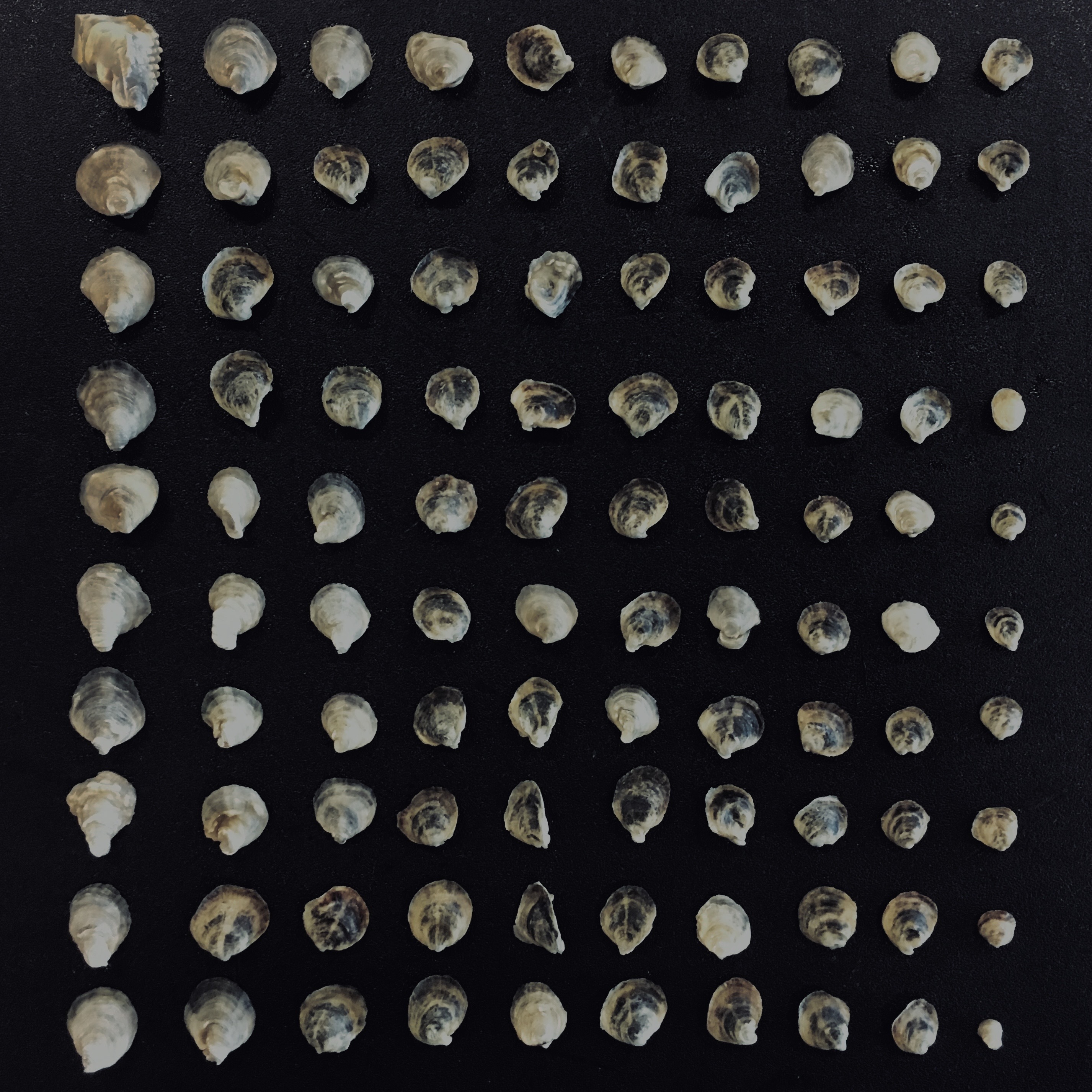