The ocean accommodates a wide variety of uses that are separated by time of day, season, location, and zones. Conflict can and does occur, however, when two or more groups wish to use the same space at the same time in an exclusive manner. The potential for conflict is well known and the management of ocean space and resources has been, and is being, addressed by a number of State, regional, and Federal organizations, including, among others, coastal zone management agencies, state task forces, and regional fisheries management councils. However, with new and emerging uses of the ocean, such as aquaculture and offshore renewable energy, comes the potential for new types of space-use conflicts in ocean waters.

In recent years, the Bureau of Ocean Energy Management (BOEM) (formerly the Minerals Management Service [MMS]) has examined ocean space-use conflicts and mitigation strategies in the context of offshore oil and gas exploration and production and sand and gravel dredging, activities that are both subject to BOEM regulation and oversight. BOEM now has authority to issue leases on the Outer Continental Shelf (OCS) for renewable energy projects, but seeks additional information on potential conflicts between existing uses of the ocean environment and this new form of activity.1

The broad purpose of this study was to begin to fill this gap by (1) identifying potential space- use conflicts between OCS renewable energy development and other uses of the ocean environment, and (2) recommending measures that BOEM can implement in order to promote avoidance or mitigation of such conflicts, thereby facilitating responsible and efficient development of OCS renewable energy resources. The result is a document intended to serve as a desktop resource that BOEM can use to inform its decision making as the agency carries out its statutory and regulatory responsibilities. 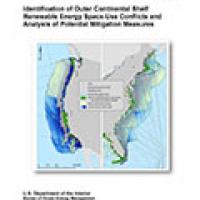