A little water could make a big difference for endangered salmon

Even small amounts of running water—less than a gallon per second—could mean the difference between life or death for juvenile coho salmon in coastal California streams, according to a new study published in the journal Transactions of the American Fisheries Society.

“The good news is that if we can get just a little bit of water back in these streams, we can make a really big difference,” says Obedzinski, who leads a monitoring program for endangered coho salmon and steelhead in the small streams of Sonoma County that flow into the Russian River.

Russian River coho salmon were listed as threatened in 1996, but despite efforts to improve habitat, the species had hit crisis levels by the early 2000’s, and they became endangered in 2005 when scientists noted fewer than 10 fish returning to the Russian River each year to spawn. In response, local, state, and federal agencies teamed up to start a conservation hatchery program to breed and release the fish. California Sea Grant’s monitoring program was set up to track the success of the hatchery releases as well as better understand the factors that were preventing recovery of the species.

Through their monitoring, Obedzinski and her research team found that low streamflow in summer is one of the biggest bottlenecks to coho recovery. She says, “After the hatchery fish are released, we see them migrating out to the ocean and coming back as adults to spawn. We even see their offspring in creeks in the early summer, but by late summer the creeks dry out, the young salmon die, and the next generation is not surviving.” 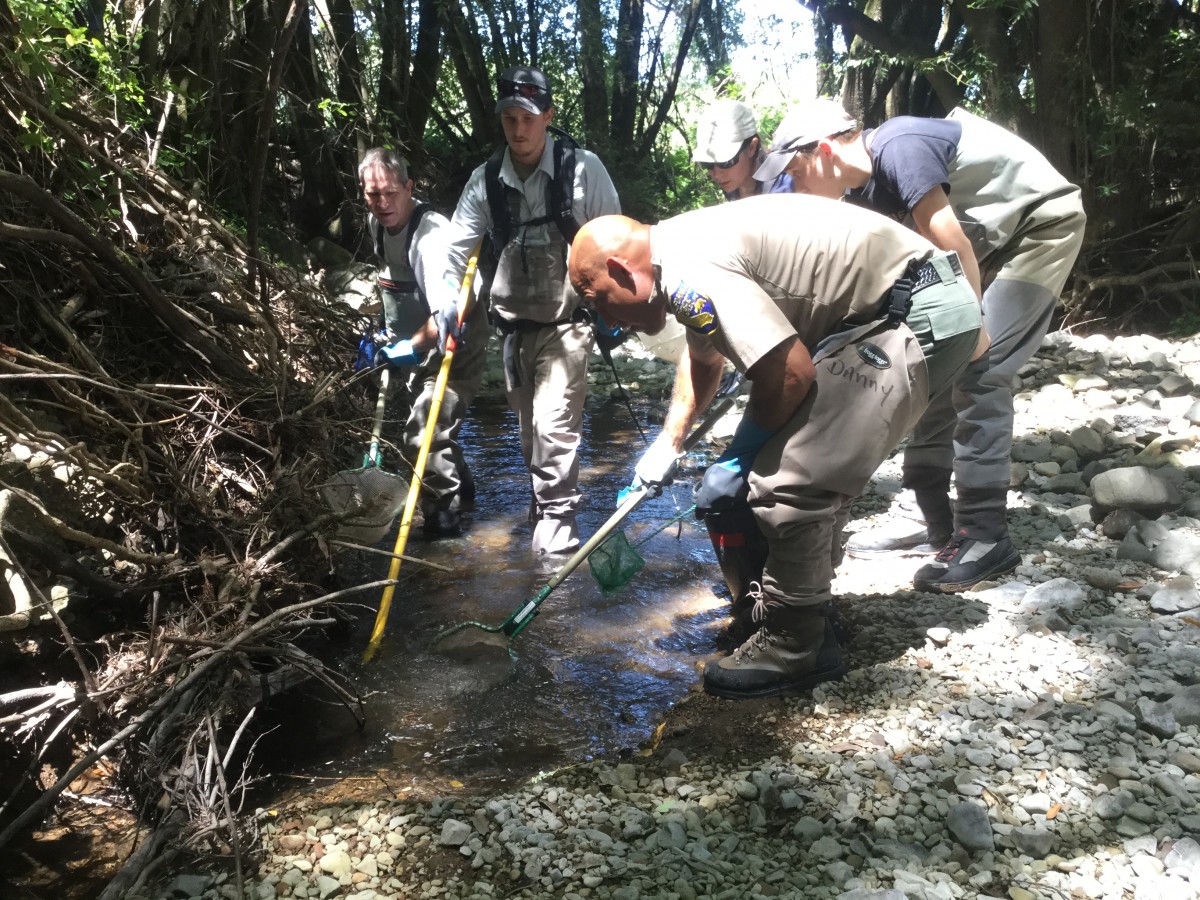 Staff from California Sea Grant and California Fish and Wildlife rescue fish from a drying stream on June 1, 2018. <a href="https://caseagrant.ucsd.edu/blogs/young-salmon-rescued-from-drying-pools">Over 800 fish were relocated</a> to parts of the watershed that stay wet all summer. © Andrew Bartshire | California Sea Grant

How much is enough?

Water is a limited resource in the Mediterranean climate of central California. Population growth and development, combined with the impacts of climate change in the drought-prone region have made flow-impaired streams even less reliable.

While previous modeling studies have established water flow thresholds to support salmon in larger, snowmelt-fed streams such as those in California’s central valley, the small coastal streams where Russian River coho prefer to spawn are a different beast.

These intermittent streams may swell over their banks during wet winter months but dwindle to a trickle or even dry up in sections during the hot, dry summer. While it was clear that young salmon needed more water to survive the summer months, the question was, how much?

“We didn’t have a sense of how much water was needed,” says Obedzinski. “The existing models are based on flows in much larger streams. When you try to apply them to our tiny coastal streams, they fall apart.”

The new study provides a clearer link between salmon survival and water flow rates in Russian River tributaries, which could be useful for resource agencies and organizations working on salmon recovery, and land owners who want to help restore endangered salmon populations. The findings may also lend support for efforts that might seem small-scale in comparison to larger streamflow improvement projects in other watersheds.

John Green is a project manager for the Gold Ridge Resource Conservation District, who has already begun applying the new research to their work restoring flow in salmon streams. He says, “The big value in this research is that it has given us an idea of how much water is needed to improve fish survival. From that, we start to understand the kinds of projects we need to build and what their impacts will be.”

The researchers stress that flows allowing for minimum persistence are not high enough to support full recovery. Obedzinski says, “Keeping a pool connected is the first step in preventing local extinction by keeping at least some of the fish alive, but we want fish to be able to grow and thrive as well. In terms of meeting recovery targets, more water means more habitat for fish, and more chance of bringing back a healthy population.”

For more than a decade, California Sea Grant’s Russian River Salmon and Steelhead Monitoring Program has been conducting broad-scale salmon and steelhead monitoring, along with specialized studies, in order to provide science-based information to all stakeholders involved in the recovery of these critical native species. Our program supports the Russian River Coho Salmon Captive Broodstock Program, the statewide Coastal Monitoring Program, the Russian River Coho Water Resources Partnership, and other salmonid recovery efforts throughout the watershed.