Climate change, development within the watershed, and water diversions for flood control are among the alterations that have changed sediment accretion and hydrologic regimes in Southern California estuaries, which in turn affect elevation, moisture, and salinity conditions for plants. This study tests for changes in the plant communities of the UC Kendall-Frost Reserve using photographs taken along photo transects between 1992 and 2013. Collaborators: Paul K. Dayton, Scripps Institution of Oceanography and Isabelle Kay, UC Natural Reserve System.

Declines in native mollusk communities and introductions of non-native mollusks over the past 50 years have been accompanied by uncertain shifts in associated ecosystem functions and increased dependence on imported, non-native shellfish in local seafood supply chains.  The goal of this study was to determine patterns and suggest causes for changes in bivalve communities through time across the region. Three objectives were met: Documenting (1) how bivalve communities have changed over the past 50-75 years,  (2) how have trends differ within and between estuaries in southern California and northern Baja California, and (3) what the potential influences are on species declines and increases. We used field surveys and literature presenting results of past surveys conducted in the same areas since the 1930’s. 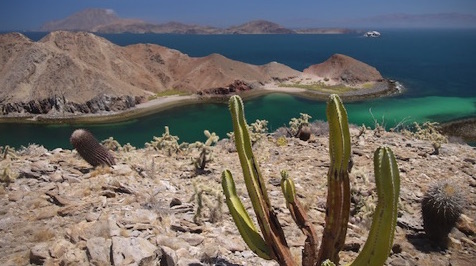 Multi-scale drivers of community structure on islands in the archipelago of Bahía de los Ángeles, Mexico.  Interactions between climate change and the processes that structure coastal communities are poorly understood. This project leverages a 30-year sets of meteorological data and floral and faunal data to determine the relative roles of long term weather patterns, including El Niño events, and local scale factors (e.g., bird nest/roosting status, perimeter to area ratio, soil moisture, plant cover) in influencing the community structure of tenebrionid beetles. Current paradigms predict that rainfall ubiquitously drives productivity on these desert islands, especially for islands with high marine subsidy (i.e., birds). This project reveals, however, that species life history and trophic status (i.e., long and variable larval stages, detritivory), lags in the incorporation of primary production into food webs, lack of soil soaking efficiency of torrential storms, and other unmeasured variables may be acting to baffle response rates revealing that rainfall may not correlate with productivity as well as we thought. This project will provide insights into potential effects of climate change on arid systems.

Understanding long-term trends in San Diego sport fishing catch. Sport fishing is an important industry in San Diego so better understanding the patterns of catch of important fish species, and underlying drivers, allows us to improve management of this valuable resource.  Trends in sport fishing catch abundance (total catch, CPUE) and composition were obtained from daily sport fishing records and revealed increases, declines and variability in landings over the past 60 years in San Diego. This project is testing the influence of large-scale environmental variables (ENSO, PDO, Temp) on catch abundance and composition. For species, or groups of species, that show strong temporal patterns over the past 60 yrs (i.e., those that have distinctly increased, decreased and fluctuated), relationships with qualitative social (e.g., fish preferences), economic (e.g., fuel costs) and regulatory (e.g., fishery closures) variables will be assessed to explain patterns.