As part of her research, Jennifer is collaborating with other California universities to conduct long term field surveys of how intertidal communities change in the absence of seastars and during sea star population recovery from the 2013-14 wasting disease.

Sea stars are an iconic symbol of California’s rocky intertidal habitats, inhabiting tide pools and low intertidal benches. However, a recent (2013) sea star wasting disease decimated populations of five species from Vancouver Island to San Diego. Similar die-offs have occurred before in California, but never at this magnitude and over such a broad geographic area. Some sea stars (in particular Pisasterochraceous) are among the main mussel predators in rocky intertidal communities, and because they occur only near the water line, sea star predation results in the bands of mussels we see in the intertidal zone - the lower edges of mussel beds are maintained by sea stars moving up from the water and eating mussels, and the upper edges of mussel beds, where waves no longer reach the rocks, are determined by desiccation. With the recent loss of many sea stars to disease, mussel beds may expand toward the water and monopolize space, thus reducing biodiversity. However, this depends on how many other predators (such as humans, oyster catchers, whelks, or sea otters) are present and whether new mussel recruits (young baby mussels) are settling into the area.

This project addresses two questions facing the California coast: what will intertidal communities look like without sea stars, and will the effect of low sea star abundance differ across different regions? With California State University COAST funding, in February 2015, I set up permanent monitoring sites on the central California coast to determine how loss of this iconic sea star will affect rocky intertidal communities.

I selected an area with human harvesting (and extensive trampling of the intertidal by beach visitors) and an area with virtually no human access on the property of PG&E’s Diablo Canyon Power Plant. At 10 locations in these two areas, I am tracking sea stars, mussels, benthic biodiversity and non-sea star predation. Every six months, students from California Polytechnic State University San Luis Obispo and I monitor sea star and mussel abundance and size; the number of sea star and mussel recruits; the diversity of other organisms directly attached to the rocks; and the abundance of other mussel predators including humans, oyster catchers, and sea otters. 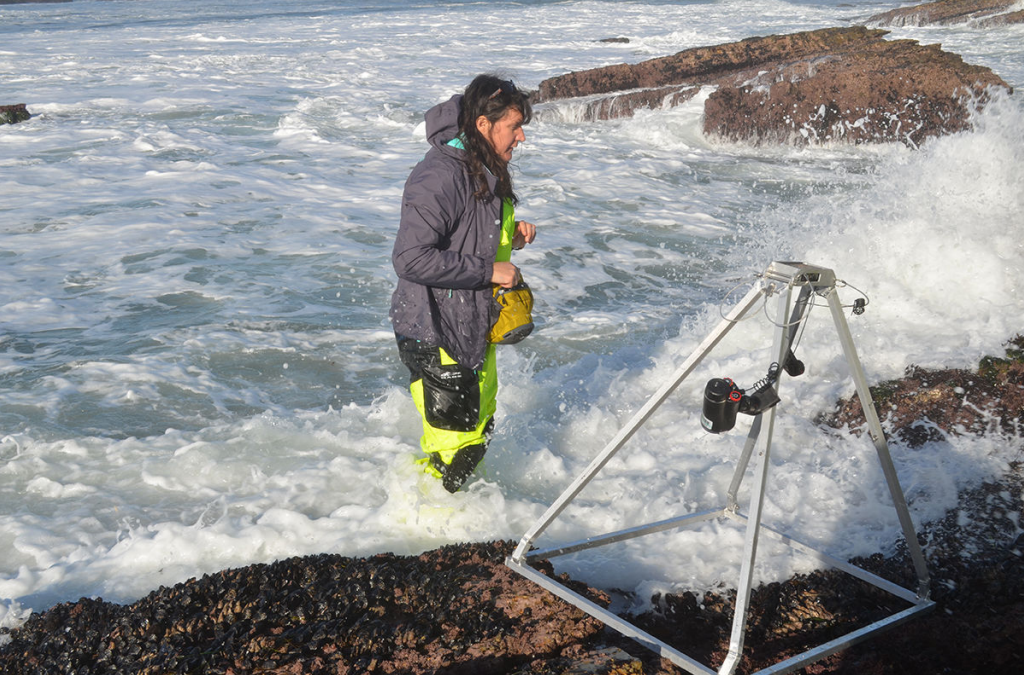 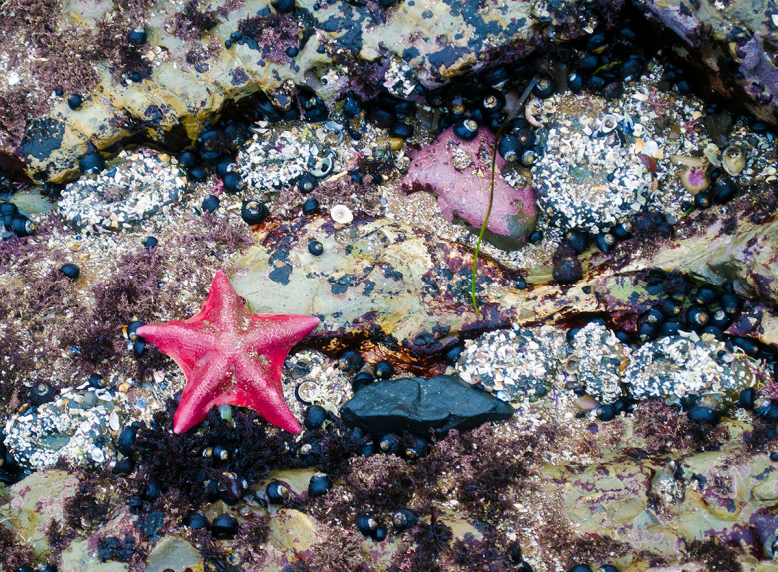 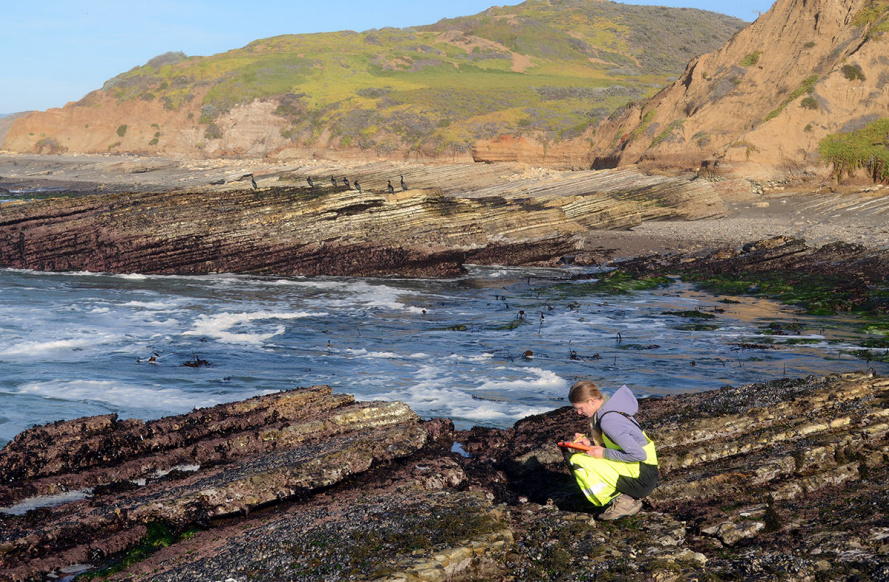 The data we collect will allow us to determine how the loss of sea stars affects intertidal rocky communities under varying levels and types of alternative predation and in sites with different levels of mussel recruitment. At our sites, we anticipate that changes in the intertidal zone will differ between human access and non-access sites. Furthermore, the project is being conducted in parallel with projects using identical methods conducted by Hopkins Marine Station (Stanford University), UC Davis Bodega Marine Laboratory, Humboldt State University, and University of Oregon, thus allowing evaluation of trends in oceanographically different areas.

Though it is too early to reveal major trends, some interesting findings have emerged. Adult sea star densities were low in February 2015 with an average of 3 per 1000m2 area, and variation between sites ranging from 0.2-8.0 per 1000m2 .

This compares to pre-disease densities of 300-1000 per 1000m2 in some parts of California. Sea star recruitment has been reported to be very high in many parts of California following the die-off. However, in the San Luis Obispo area, we started seeing new sea star recruits later than at other sites (June 2015 rather than January 2015) and these were found in low numbers (maximum 1 per 10 m2 ) and only at a few locations.

After finding few to no mussel recruits between February and June 2015, we started seeing recruitment between June and September. There was significant variation in mussel recruits among sites, with the highest number of recruits (283 in a single collection device) at the site with public access, which also has the largest and most abundant mussels. Since this is the first major recruitment event since site establishment, it is too soon to tell whether mussel recruits will start filling lower intertidal areas where sea stars used to keep populations in check, but we should be able to determine if this is happening in our 2016 sampling. Whelks (alternative mussel predators) were equally abundant across sites and transects, as were oyster catchers. At the public access sites, humans were observed harvesting mussels near plots on two occasions. As sampling continues in 2016, we will evaluate how mussel bed expansion relates to differences in sea star density, mussel recruitment, and human harvest, and we will keep tracking all other factors as well.

We will be collating our data with data from other sites in California and Oregon to evaluate whether any sites show early signs of change in mussel populations and to compare density of sea stars and sea star recruitment across a broad geographic range. In the broader study, we see signs of increasing mussel bed depth and mussels shifting lower in the intertidal communities in some sites. 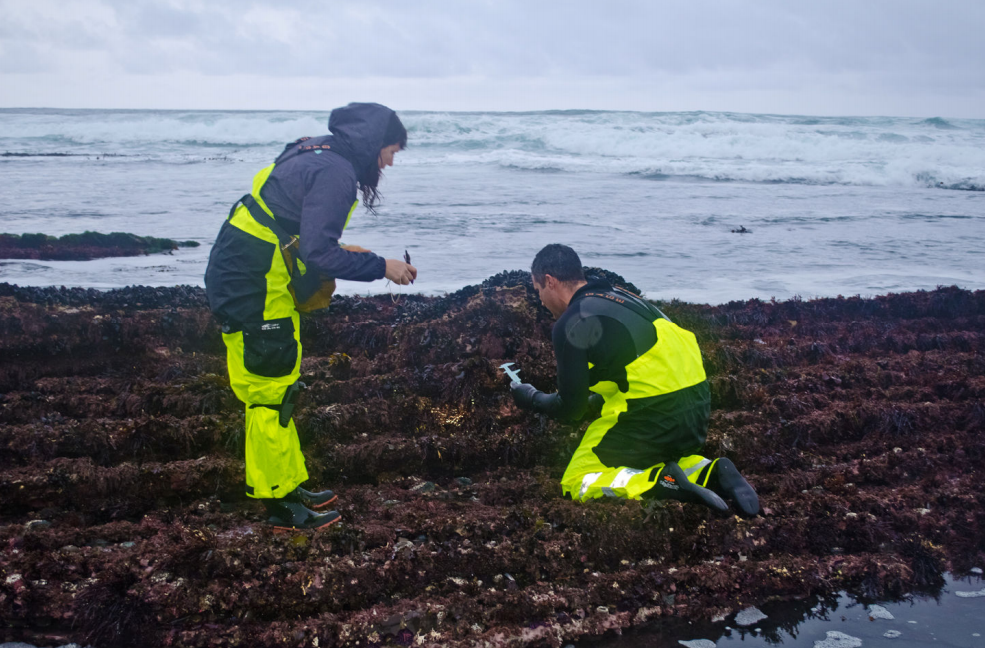 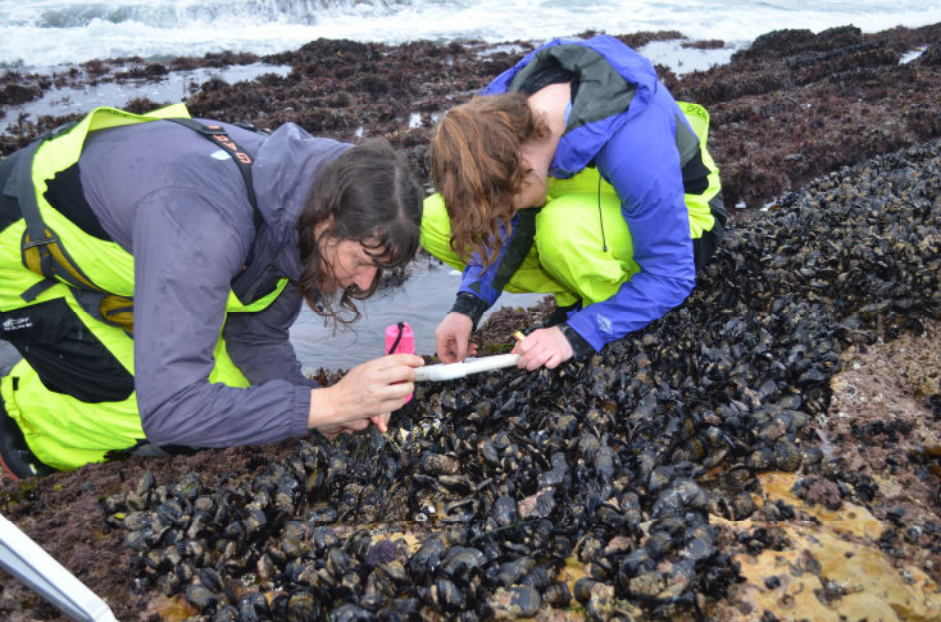 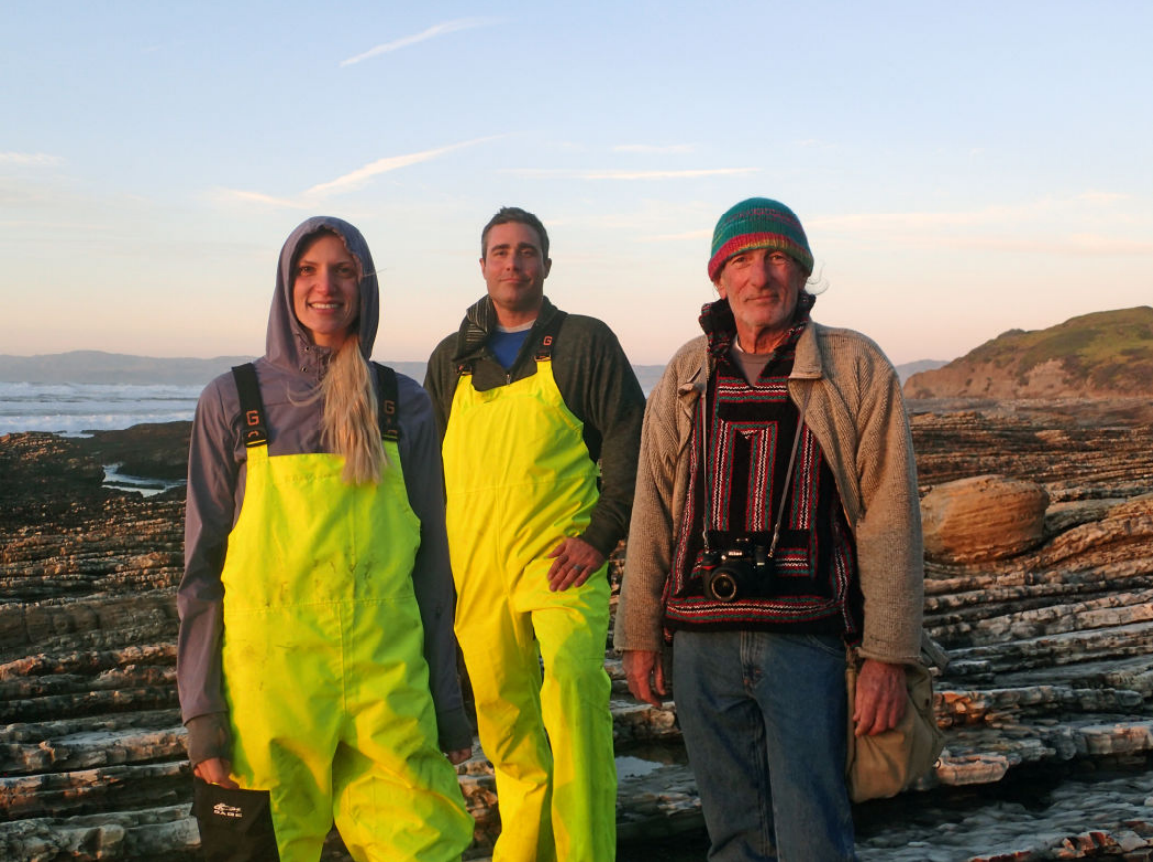