Through the Delta Science Fellowship program, post-docs and graduate students team up with academic and community mentors to study targeted San Francisco Bay-Delta research priorities. The program is geared toward providing scientific information for managers and policy makers.

Modeling Liquefaction and Levee Failure in the Delta 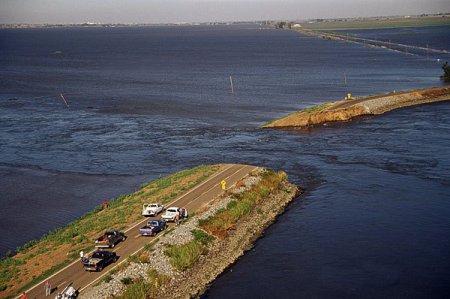 The unexplained failure of the Jones Tract levee in June 2004 exposed the vulnerability of delta levees. Credit: California Department of Water Resources

California is earthquake country, and geologists say it’s only a matter of time before a major quake strikes the Sacramento-San Joaquin River Delta. Among the infrastructure that is most vulnerable to seismic shaking is the delta’s aging 1,100-mile collection of earthen levees that channel and protect drinking water for more than 20 million Californians. This project attempts to identify which levees in the delta are most likely to collapse during intense shaking by mapping the locations of underlying sediments—young river channel sands, soft clays and flood basin deposits—that are most likely to liquefy, fail or deform in response to seismic activity. Findings from this project may help guide costly levee reinforcement projects and contribute to ongoing efforts to develop strategies for maintaining water supplies in the event of the inevitable.

The Loss of Marshes in the Delta, Has It Changed the Base of the Food Web?

Has habitat loss altered the base of the food web in the Sacramento-San Joaquin River Delta? This project seeks to test the hypothesis that the primary source of carbon (energy) at the base of the food web has shifted from plant detritus to phytoplankton, as wetlands and their marsh plants have been destroyed.  As a result, the food chain has become structured around pelagic food web dynamics and is yet one more symptom of ecosystem degradation. To investigate these ideas, the Delta Science Fellow is using stable isotope and fatty acid biomarkers to: 1) identify the origin, transport and fate of organic debris in the delta and Suisun Bay, and 2) investigate the role of this debris in supporting key invertebrate prey organisms in tidal marshes and other shallow-water ecosystems. Ultimately, she would like to evaluate implications of freshwater discharges on these processes and investigate the connection between marsh ecosystems and aquatic food webs. Findings will be of relevance to wetland restoration planning. 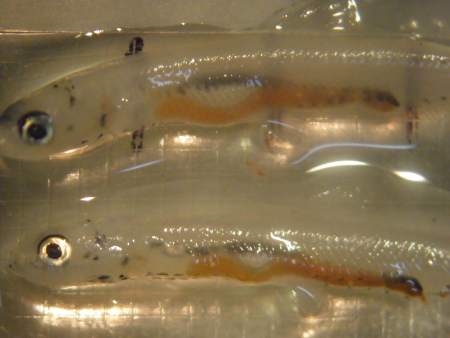 These delta smelt are 85 days old and 23 millimeters. Researchers are studying the effects of salinity on juvenile fish growth and survival. Credit: B. Kammerer

This project seeks to identify salinity tolerances of two state protected fish species – longfin smelt and delta smelt. To date, experiments have focused on newly hatched and post-45-day-old smelt. This preliminary work shows that both smelt species are able to survive and grow in salty waters. In coming months, the Delta Science Fellow will conduct experiments on adult delta smelt. These experiments will look at how changes in water salinity, associated with natural fish movement patterns in the estuary, might affect the delta smelt’s physiology. Yet, another component of this project is to identify biomarkers for both species, through fluorescent staining of gill cells. These biomarkers will let scientists and managers monitor species’ exposures to different water salinities. Results from this project may further what is known about the species’ life history requirements, particularly the timing and speed at which smelt can transition from fresh to saline conditions.

Understanding the Impacts of Climate Change on Delta Smelt 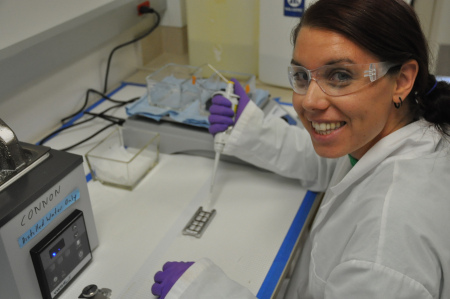 Lisa Komoroske prepares a microarray slide with RNA samples extracted from the gills of delta smelt exposed to different salinities. Scientists want to understand how the fish might respond to climate change. Credit: K. Jeffries

Climate change is expected to increase both water temperatures and salinities in the delta. This project examines potential consequences of climate change to the endangered delta smelt at multiple biological scales. In the project’s first year, laboratory experiments were conducted to determine the species’ thermal and salinity tolerances and physiological responses to warm and salty waters. The Delta Science Fellow has developed a microarray for the delta smelt’s “transcriptome,” the small percent of the genome that is involved in making proteins. This lab-on-a-chip will be used to document normal levels of gene expression and how they change as water temperatures and salinities approach tolerance thresholds. Once this is accomplished, the fellow plans to integrate physiological, genomic and environmental water-quality data to model mechanisms of physiological tolerance. Results will shed light on how, or whether, climate change might alter fish habitat quality and in this way help managers prioritize conservation strategies.

Controls on the Net Carbon Emissions from Restored Wetland Ecosystems 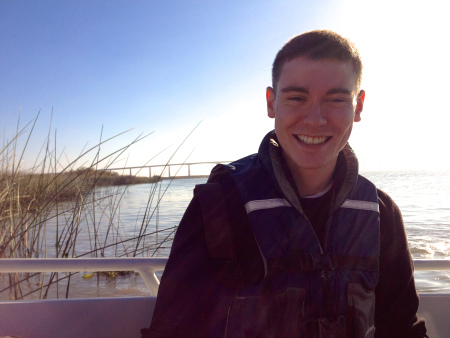 Are wetlands net sources or sinks of greenhouse gasses? Could certain restoration strategies alter carbon loading? This project explores emissions scenarios for two large restored wetlands in the San Francisco Bay-Delta—one on Sherman Island, the other on Twitchell Island. The main goals are to quantify methane releases from wetland soils and, using isotopic methods, to investigate the effects of marshland plants on methane flux dynamics. In the project’s first year, scientists surveyed soil methane production at the two restored sites and at a natural wetland called Sherman Lake on Sherman Island. Rates of methane and carbon dioxide production were found to be high across all sites, suggesting that the age of a wetland does not predict methane emissions. At the scale of microbes, redox chemistry seems to partially regulate the relative amounts of carbon lost as carbon dioxide vs. methane. This suggests that wetland restoration projects could potentially be modified to reduce methane emissions. In the summer of 2013, scientists began a second phase of fieldwork. They are capturing “time-stamped” methane bubbles in Mayberry wetland. These data will enable scientists to correlate gas releases to environmental factors. In the coming year, the Delta Science Fellow will measure the radiocarbon age of methane emitted from wetlands to distinguish the relative contributions of methane from new plant material vs. methane from decomposing peat soil layers, which restoration may stabilize.

Understanding Food Webs in Shallow Nearshore Waters of the Delta 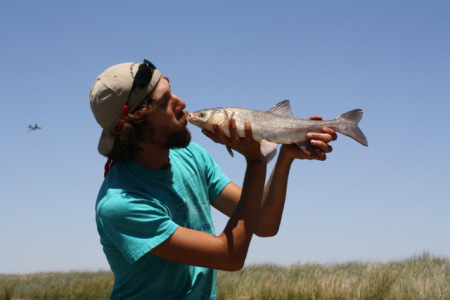 Matthew Young with a Sacramento blackfish, one of the native, resident fish species that researchers believe may be adversely affected by non-native fish invasions. Credit: UC Davis

This project explores the impact of non-native species on native, resident fish populations. The emphasis is on documenting the effects of non-native species on predator-prey relationships, food availability and habitat quality. In the project’s first year, the Delta Science Fellow explored trends in fish populations, for species such as Sacramento blackfish and tule perch. He is now comparing what native and non-native fishes, with presumably similar roles in the ecosystem, consume and how they utilize habitat. The goal is to better understand how native and non-native fishes might respond to various restoration options and the degree to which declines in native, resident fish species might be due to competition with invasive species for food and habitat. Findings will provide greater insight into the factors that are most critical to rebuilding or sustaining native resident fishes. 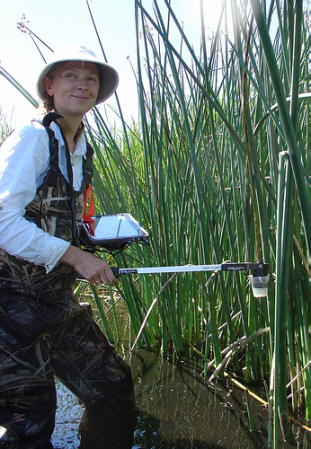 Imagine farmers growing crops not for food but to sequester carbon dioxide. Under the state’s cap-and-trade program, such scenarios are possible, though there are many details to hash out – not the least of which is putting hard numbers to the carbon-credit value of different types of vegetation. In research that may help in this effort, the Delta Science Fellow is attempting to develop a method for calculating vegetative cover (“leaf area index”) in key wetlands of the Sacramento-San Joaquin River Delta, using NASA Landsat satellite images. Her work to date has focused on collecting fish-eye images of plant communities at freshwater marshes on Twitchell Island and Sherman Island and tidal marshes at Suisun Marsh. From these photos and light-intensity readings, which are also recorded, she is able to calculate local estimates of leaf area index. In the coming year, these estimates of leaf area index will be compared to Landsat’s spectral-based estimates for the same areas, to establish, or look for, a consistent relationship between the two estimation methods. If this can be done, scientists will be able to use the Landsat images to reconstruct vegetative cover and density over a 30-year period for the entire delta. This reconstruction will facilitate an ongoing NASA-funded study to quantify net carbon fluxes in wetlands in the delta. Other applications of the project include being able to better monitor trends in wetland bird habitat quality and recovery trajectories for various habitat restoration projects.