To bring back abalone, researchers aim to outsmart octopus

Abalone species up and down the West Coast have declined due to overfishing since the 1900s, and in the last 50 years, white abalone and several species were driven almost to extinction. Since then, environmental change and disease have hampered recovery of the large sea snails. But the next barrier to abalone restoration efforts may be one of their natural predators—the California two-spot octopus.

When NOAA fisheries managers set up the first ever test beds to restock abalone off the coast of Los Angeles in 2016, the abalone were gobbled up within weeks by octopuses—which had appeared to increase in number compared to a survey conducted prior to the stocking.

“They just swooped in and ate everything,” says Jennifer Hofmeister a researcher at Scripps Institution of Oceanography at the University of California San Diego. Hofmeister is leading a California Sea Grant-funded study to find out more about octopus predatory behavior—and how people working to save the abalone can use that information to make sure their efforts are not in vain.

Octopus are voracious predators, and like wealthy seafood connoisseurs, they have a taste for abalone meat. “Octopus just love to eat abalone. And they are very clever at problem solving,” explains Hofmeister.

The goal of the project is to provide enough information about octopus predation that researchers might be able to outsmart them, giving newly released juvenile abalone a head start on life in the ocean.

To do that, one of the first questions is how far octopus will travel for a meal.

“We know very little about octopus behavior in the wild—where they go and why they go there,” says Hofmeister, “There are lots of stories about octopus getting into fishing traps and causing other mischief,” but scientific data on the species is scant—in part because there is no commercial fishery for octopus in California and in part because of the difficulties in tracking them.

Previous studies suggest that octopuses have a home range of around 250 square meters—an area the size of a tennis court. But these studies were primarily gleaned from observations—literally, watching and following the animals—and were therefore greatly limited in time and numbers. 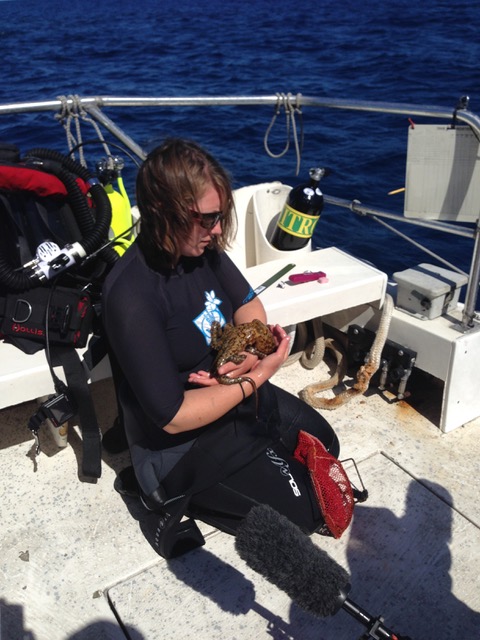 Jennifer Hofmeister prepares an octopus for tagging.Hofmeister’s project was the first to use an acoustic tracking method using a transmitter attached to this California species.  She set up an array of receivers in the La Jolla kelp forest that would track the tagged octopuses over a period of 5 to 7 months. But when the results came in, the researchers were disappointed—there were almost no data to speak of.

Preliminary analysis of the data records showed that while a few of the octopuses had managed to remove their tags, most of the animals had left the array almost immediately after being released. That suggests that the home range of the local octopus population was far greater than previously estimated

Hofmeister is now working with the NOAA National Marine Fisheries Service and the California Department of Fish and Wildlife (CDFW) to inform their stocking protocol for white abalone.  In a second experiment off the coast of San Diego, where octopus populations had just dropped in population, the researchers saw far less octopus predation on the stocked abalone. While an octopus survey is not a simple undertaking—involving divers peeking under every rock and into every crevice they can find—it may make the difference between success and disaster. “Starting density of octopus at an outplant site is a key piece of information,” says Hofmeister.

Hofmeister hopes that her research will help increase knowledge of a fascinating but understudied species, while providing practical information that can help save the endangered white abalone.

“Essentially we’re trying to trick the octopus,” she says. “Predation is natural, but in order to successfully restore white abalone, we need to give them a head start.”