Tasty and pink, sea urchin species may be a climate-tolerant food source

Sea urchin is a delicacy in Asia, South America, Europe, and increasingly in California, where the uniquely flavored roe, or uni, is used in sushi, gourmet cuisine, and products such as sauces and flavorings. But the large red sea urchin (Mesocentrotus franciscanus) caught off the coast of Southern California—the primary urchin fishery in the US—is vulnerable to increased water temperatures and ocean acidification.

Belying its name and delicate appearance, the fragile pink sea urchin is in fact hardier than its red cousins, thriving at greater depths, lower oxygen levels, and higher acidity levels than other urchin species, according to Sato’s research.

In Sato’s Ph.D. research, which examined how deep-sea species were responding to climate change, he had noticed that the pink urchins were becoming increasingly widespread throughout southern California, even as other species were struggling with the variable environmental conditions.

“Throughout the course of my dissertation, I also learned that pink urchins were also commonly found as bycatch in spot prawn traps, but they needed to be released because there was no market for them,” says Sato.

Sato wondered if there could indeed be a market for the pink urchin roe. To investigate, he and advisor Lisa Levin teamed up with Dave Rudie, owner of Catalina Offshore products, and proposed a research project on the topic to California Sea Grant. The project aimed to evaluate the feasibility of a fishery from a population and seasonality point of view, and to compare the food quality properties of the roe, including size, color, and texture.  It built off work that Sato and Levin had done with Ken Schiff of the Southern California Coastal Water Research Project using several decades of data on pink urchins caught in bottom trawls during surveys of the ocean floor.

In the new study, the researchers analyzed years of trawl data to find out where and when fishers could expect to find the most pink urchins with edible roe. They found that the urchin species is most abundant at a depth of 250 to 300 meters (820 to 984 feet), similar depths where spot prawn fishers set their traps, and that winter was the primary time when the urchins produced edible roe.  According to the study, the density, timing, and location of the urchins looked promising to support a viable fishery. In particular, legalizing the fishing of pink sea urchin as a bycatch to the prawn fishery could allow prawn fishers to sell the urchins they already catch, rather than throwing them back.

To start a new fishery, one key question is whether there is a market for the product. So as part of the study, Sato worked with summer student Jackson Powell to test some of the food qualities of the pink urchin uni. While some of the qualities, such as color and consistency, were a good match, they found that the pink urchin roe on average weighed 80% less than that of the red urchin.

Another urchin species, the purple sea urchin (S. purpuratus), has been harvested on a limited and experimental basis to little success, in part because of smaller sized roe. But the purple urchin is also vulnerable to changing climatic conditions. If the red sea urchin fishery continues to struggle, the pink urchin could be a good fallback or supplemental fishery to help shore up the red urchin fishery.

Before the pink sea urchin shows up on any sushi menu, a number of questions remain. Researchers need more information on growth rates, and processing trials and taste tests would be needed. On the regulatory side, establishing a new fishery requires state and local agencies to approve and establish regulations.

Rudie points out that while it is technically legal for urchin divers to harvest pink urchins individually, it’s not practical to do so because they live at greater depths, in the same locations as spot prawns, and there is no proven market yet. If a culinary market does develop, he says, “an easier solution would be to allow spot prawn fishermen to simply keep any pink sea urchins they get and sell them as bycatch.”

“We don’t necessarily think pink urchins are a viable replacement for red urchins in the future given how much smaller their roe is on average,” says Sato. “However, in light of recent increasing demands for sea urchin worldwide and the potential impacts of climate change on red urchins, aquaculture efforts or supplemental harvest of an underutilized species such as pink urchins may be a foreseeable next step.”

With the impacts of climate change becoming more pronounced, identifying and facilitating potential climate tolerant fisheries will be important, adds Levin. She says, “As ocean oxygen content declines and acidity increases in California waters it will become increasingly important to incorporate these changes into fisheries management practices.” 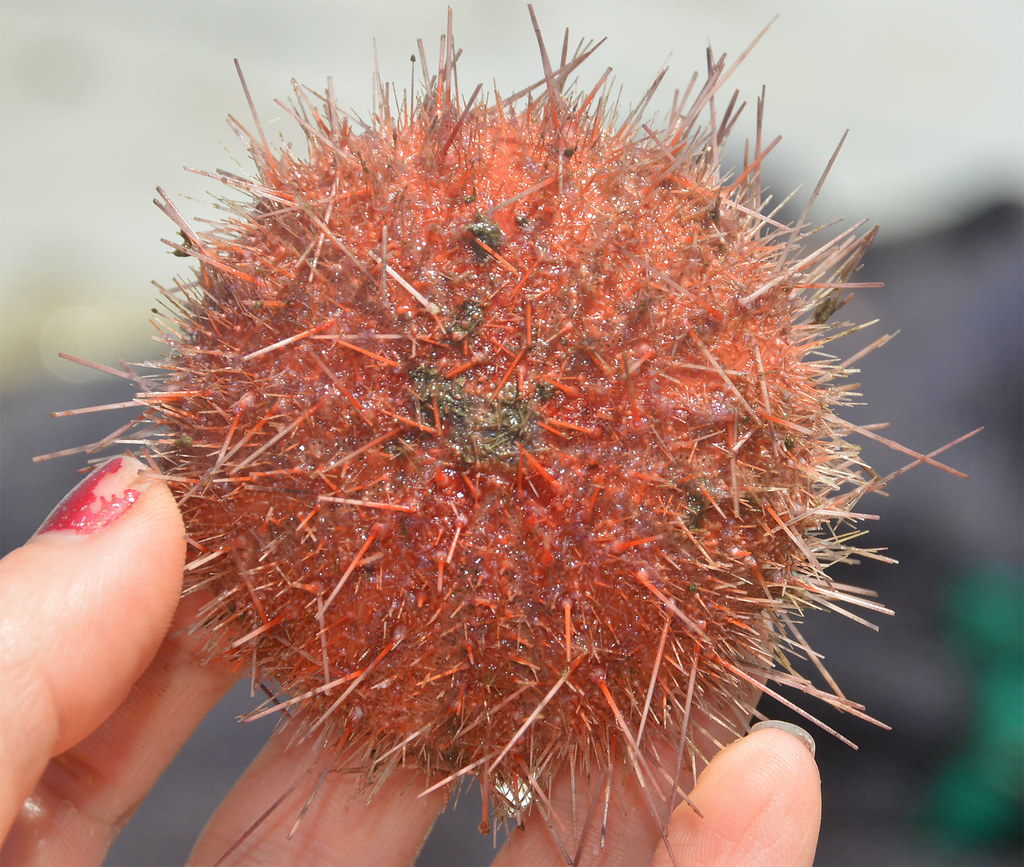