Study of mollusk epidemic could help save endangered sea snail

Abalone, large single-shelled mollusks, are an unusual sight these days off the coast of Washington, California, and Oregon. Of seven species of abalone on the west coast, two are endangered and three are considered species of concern. And one of the two species that is not considered threatened, the red abalone, saw a population crash last year that led fisheries managers to close the recreational fishery for 2018 in California.

Though the decline of abalone was in large part driven by overfishing, restoration efforts are complicated by environmental change and now, a deadly disease called withering syndrome. In a new study funded by California Sea Grant, researchers shed new light on withering syndrome in three species of abalone: the red, the pink, and the pinto.

The study shows that species adapted to colder waters may be more vulnerable to the illness, and that rising water temperatures lead to greater susceptibility.  That means that as water temperatures increase, the disease could spread further north to northern California, Oregon, and Washington, affecting abalone farms that produce the shellfish for food as well as efforts to protect and restore native abalone species along the coast.

“Withering syndrome was first noticed in 1985, in the Channel Islands off of Southern California. Since then, it has spread both north and south along the coast, south into Mexico and as far north as Sonoma County,” says University of Washington researcher Carolyn Friedman. The syndrome led to catastrophic die-offs of the now endangered wild black and cultured white abalone populations, and has been observed in other species such as the pink and red abalone.

“The initial clinical signs that one can observe are general and include weight loss and anorexia. A farmer might notice that the abalone are not eating as much and have become anorexic. Normally the body and foot of an abalone fill the entire volume of shell. When they are infected, you can see the mantle retracting from the edge of the shell,” says Friedman. Once these signs of disease appear, the disease is incurable. The infected abalone die within one to three months. “Just wasting—withering—away,” says Friedman.

The cause of the disease has been identified—a bacterium related to the one that causes typhus in humans—but it wasn’t clear why some species seemed to be more vulnerable than others. Also unknown was whether species currently outside of the epidemic’s range could also be infected.

In the new study, Friedman and a graduate student, University of Washington Ph.D. candidate Lisa Crosson, infected three species of abalone that range from California to Washington with the bacterium that causes withering syndrome, and exposed them to a range of water temperatures. 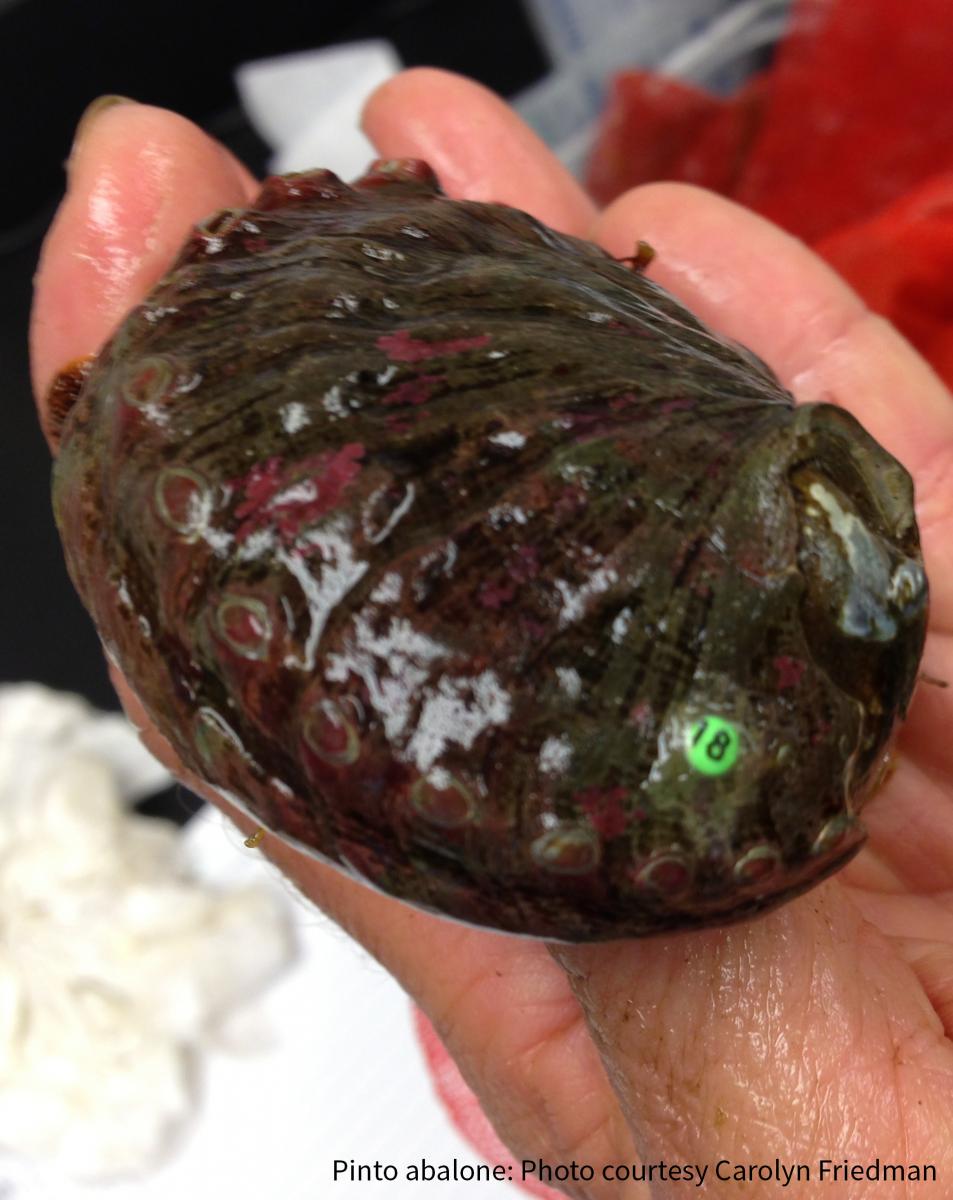 “This was the first infection study with pinto abalone, where we've demonstrated that they’re highly susceptible to infection, and have extremely low resistance to withering syndrome. The pinto [abalone] were the only species in experiment that experienced 100% mortality, while red and pink had less than 30% mortality,” says Crosson.

Friedman and Crosson also found that genetics may play a role—when they compared genetic markers from the three species with the white abalone (extremely vulnerable to the disease), they found a link between vulnerability and genetic relatedness to the white abalone.

Who cares about an animal whose body consists of a salad-plate sized shell and a rubbery body with a simple nervous system? For one, those who would like to eat it, fish it, or farm it: abalone is a delicacy, prized for its salty taste and calamari-like texture. The commercial fishery in California has been closed since 1997, but abalone farming and sport fishing still bring important economic benefits to the state. The commercial red abalone sport fishery in California, which is closed for 2018, was estimated to bring in between $24 and $44 million dollars to Sonoma County in 2016, and a pound of farm-raised abalone currently fetches over $100.

Abalone farmer Ray Fields provided red abalone for the study, and has worked with Friedman on other research projects on withering syndrome—a major threat to the abalone farming industry. He says “abalone farming is extremely small-scale agriculture. We don’t a have a lot of funding to do this type of research on our own. So any time there’s a disease issue, it’s crucial that we have access to this type of collaborative research with universities, researchers, and Sea Grant.”

Wild abalone are also important species in their native ecosystems; like slow-motion cows grazing the ocean floor, abalone clear rocks and seabed of seaweed, creating space for other species to settle and thrive. Ecologists consider them ecosystem engineers for this important role. Without abalone, the balance of kelp, seagrasses, and sea urchins are disturbed, altering the entire food web.

In Washington state, Friedman started an effort to restore the pinto abalone, initially supported by Washington Sea Grant, that has had slow but steady success. Other restoration efforts are underway for the green, white, and black abalone in Southern California. The new findings could help these restoration projects strategize to avoid the disease.

The research also serves as a warning of how climate change could impact already vulnerable species, and could prove useful for restoration efforts, along with forecasts of ocean temperature change.

“Marine animals do suffer from infectious disease, and temperature is a very important trigger. So if we can reduce ocean warming, we can reduce impacts that people may not even realize can happen,” says Friedman. 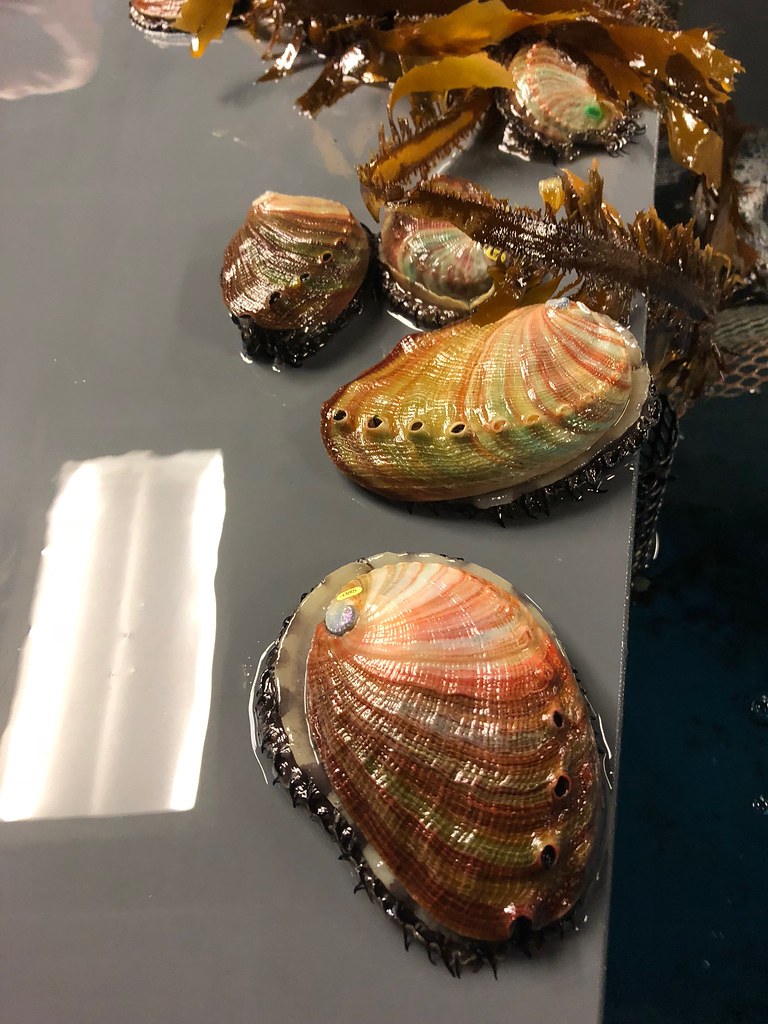