Humboldt Bay is now home to one of the most advanced ocean chemistry monitoring instruments in the world. On May 14, Oregon State University oceanographer Burke Hales joined California Sea Grant and Humboldt State University researchers to install his namesake invention, the “Burke-o-Lator,” at the Hog Island Oyster Company’s new hatchery on Humboldt Bay in northern California. It is the third such device to be set up in the state.

The new instrument will monitor how the seawater chemistry in Humboldt Bay is being altered by ocean acidification: as the concentration of carbon dioxide (CO2) in the atmosphere increases, some of that CO2 dissolves into the ocean which makes the seawater more acidic. Ocean acidification is bad news for shellfish like oysters and mussels that build their shells out of acid-sensitive calcium carbonate—and also for shellfish farmers like Terry Sawyer, co-owner of Hog Island Oyster Company, whose livelihoods depend on healthy oysters.

In Humboldt Bay, researchers suspect that the healthy eelgrass beds—which make up nearly half of the remaining eelgrass in California—may be reversing ocean acidification within the Bay to some extent by taking up dissolved carbon dioxide. The Burke-o-Lator will provide continuous data that will help researchers better understand the role of eelgrass. It will also be useful for oyster growers, who can use the data to protect their product.

The new sensor will help fill a gap in a network of ocean monitoring stations from California to Alaska; the closest Burke-o-Lators are 300 miles north at the Whiskey Creek Shellfish Hatchery on Netarts Bay, Oregon, and 200 miles to the south at Hog Island Oyster Company’s farm in Marshall, California on Tomales Bay. Once the new Burke-o-Lator is fully operational, the data will be made publicly available in real-time via the Central and Northern California Ocean Observing System (CeNCOOS) website.

“It’s really exciting to finally have a Burke-o-Lator monitoring Humboldt Bay. Humboldt Bay is a nexus of the human-caused environmental challenge of ocean acidification, the threat it poses to the sustainable cultivation of oysters, and the potential for healthy eelgrass ecosystems to reduce this threat,” says California Sea Grant Extension Specialist Joe Tyburczy, who participated in the device installation as part of a project funded by the California Ocean Protection Council. Tyburczy led the development of this collaborative project with colleagues at Humboldt State University, Bodega Marine Laboratory, the California Department of Fish and Wildlife, the Wiyot Tribe, and the Hog Island Oyster Company.

As part of the same project, Tyburczy and colleagues are deploying additional sensors in Humboldt Bay to learn more about the degree to which eelgrass reduces ocean acidification, and how much this may benefit juvenile oysters. They have also begun monitoring eelgrass at a number of sites throughout Humboldt Bay to detect changes in its abundance and distribution.

"Not only will this installation expand our capacity to monitor ocean acidification, it will also provide our students with technology and data streams that can improve their understanding of carbonate chemistry in seawater. This is often one of the most challenging topics to teach in the ocean chemistry classroom. In addition, students will get experience with state-of-the-art equipment that will become more common in water quality laboratories around the country.  This will better position our graduates for success in the job market," says Jeffrey Abell, a chemical oceanographer at Humboldt State University who is helping to lead the project.

Sawyer adds that the instrument represents a success story of public-private collaboration. He says, “This collaboration makes it possible to not only provide the data for us to make management decisions for hatchery operations, but also help to provide the same quality data to the monitoring network on the west coast of North America.” 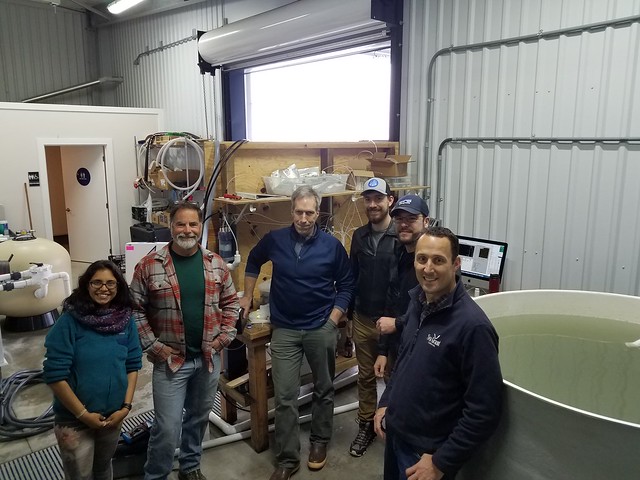