Coastal marshes are vulnerable to erosion caused by rising seas, pounding waves, and tidal flows. In Elkhorn Slough, these vulnerabilities are made worse by superabundant crabs found at their highest densities along the estuary’s tidal creeks, according to a new study published August 8 in Ecosphere.

The striped shore crab (Pachygrapsus crassipes) is a small crab found all along the West Coast of North America, and it is extremely abundant in Elkhorn Slough. The study demonstrated the dual role of these crabs as both consumers of salt marsh vegetation and as ecosystem engineers.

“Their burrowing weakens the creekbank edges, so that whole chunks of marsh will sometimes calve off, and by lowering biomass they are reducing the ability of marsh plants to prevent erosion,” said lead author Kathryn Beheshti, who earned her Ph.D. in ecology and evolutionary biology at UC Santa Cruz in 2021 and is currently a California Sea Grant State Fellow at the Ocean Protection Council’s Climate Change Program.

Beheshti and her coauthors conducted a five-year field experiment to assess the effects of crabs on the vegetation and sediments along eroding creekbank edges. Using fencing and traps made of empty tennis-ball cans to exclude crabs from experimental enclosures, they found that reducing crab abundance led to increased growth of salt marsh vegetation and enhanced sediment density.

The researchers also found that the number of burrows did not change over the study period, even with researchers experimentally removing crabs. The unexpected persistence of the burrows highlights the value of long-term field experiments. The experiment was maintained for five years thanks in large part to the efforts of a team of over 50 UC Santa Cruz undergraduate students and high school interns.

“Field experiments that span multiple seasons and years are rare,” said coauthor Kerstin Wasson, research coordinator of the Elkhorn Slough National Estuarine Research Reserve and an adjunct professor at UC Santa Cruz. “This work demonstrates the value of long-term studies by showing that burrows, which weaken the stability of tidal creek banks, persist despite the near absence of the crabs that build them.” 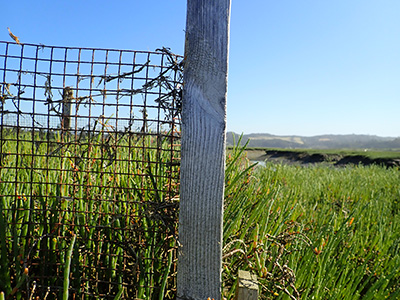 Pickleweed grows noticeably taller and denser in the fenced area from which crabs are excluded. (Photo by K. Beheshti)

Coauthor Brent Hughes, assistant professor at Sonoma State University, noted that the crabs were most abundant in spring and summer, when the pickleweed marshes are at peak production. “This synchrony suggests that the effect of crabs as consumers is more punctuated than their more chronic effect as engineers,” he said.

Elkhorn Slough is one of the largest estuaries in California, with the largest tract of tidal salt marsh in the state outside of San Francisco Bay. It has been highly altered by human activities, however, and erosion along the edges of the tidal creeks and main channel is steadily eating away at the marsh.

“It’s a big issue, because when the marsh erodes away along the tidal creeks it’s a permanent loss,” Beheshti said.

The impacts of crabs on marsh biomass and soil structure near tidal creek banks are likely to make the marsh less resilient to erosion and sea-level rise, presenting a unique challenge to managers. Restoring populations of crab predators, such as herons, racoons, and sea otters, may be one way to mitigate these negative effects.

This collaborative study brought together marsh ecologists from both the East and West Coasts who have led the field in exploring how animals affect the marshes they inhabit. Over the past few decades, the U.S. East Coast has been the epicenter of studies exploring top-down effects in salt marshes, and this study is one of the few to explore such effects in a West Coast salt marsh.

“Southeastern U.S. marshes appear to be a harbinger of what’s to come for marshes along the Pacific coast, with sea-level rise amplifying the effects of what would otherwise be considered an innocuous crab,” said coauthor Christine Angelini, associate professor at University of Florida.

The authors called for similar long-term studies to be conducted in other West Coast marsh systems to determine how widespread these crab effects are. “It’d be great for contextualizing our findings,” Beheshti said. “We’d like to know if Elkhorn Slough is the canary in the coal mine, signaling yet another pathway for accelerated marsh edge loss for one of California's rarest coastal habitats.”

This work was supported in part by grants from the David H. Smith Conservation Research Fellowship, the Myers Ocean Trust, and Friends of Long Marine Laboratory. 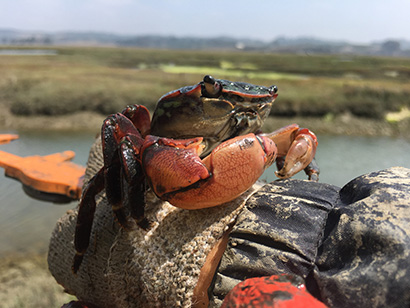