Underneath the Municipal Wharf II in Monterey Bay, hundreds of abalone—large sea snails— grow in suspended cages in an open water farm. The abalone, cultivated by the Monterey Abalone Company, are fed local, hand-harvested giant kelp once a week, until they grow big enough to be sold to restaurants and local seafood connoisseurs.

Marine farms like the Monterey Abalone Company are hardly new. Aquaculture, or the farming of aquatic animals or plants in water for food, has been around for thousands of years. Today, about half of all seafood for global human consumption is produced through aquaculture, according to NOAA Fisheries.

But while there are more than 1,000 shellfish farmers on the East Coast, aquaculture is still a rarity in California. The state has only four percent of the aquaculture farms in the country and makes up just six percent of seafood sales from aquaculture. However, numerous scientists, government officials, entrepreneurs, and nongovernmental organizations are working to change that.

“California is the world’s leader in agriculture and there is no reason why we can’t also be the world’s leader in aquaculture production and technology,” said California Sea Grant Extension Specialist Paul Olin at a recent aquaculture forum at Moss Landing Marine Laboratories in Monterey county. “With strong public and private ethics for environmental protection and stringent regulatory programs, California can become a global leader in aquaculture production. As Jacques Cousteau said in 1973, high efficiency sea farms totaling the size of Switzerland would produce more food than all fisheries combined.”

According to a 2016 report by the United Nations, the world’s population is expected to grow to 9.7 billion by 2050 and boost agricultural demand by at least fifty percent. Global growth of the middle class will add additional pressure to natural resources and food systems.

Harvest from wild fisheries worldwide has been at a plateau for decades and there aren’t enough fish in the oceans to meet our appetite, according to California Sea Grant Extension Specialist Luke Gardner, who organized the August forum. Aquaculture is increasingly recognized as an effective way to meet the protein demands of a growing population. Recent studies have found that farmed fish has a lower environmental footprint compared to beef, lamb, and pork. Aquaculture has also become a national priority. The National Oceanic and Atmospheric Administration (NOAA) calls for more aquaculture as a strategy to improve food security and enhance economic and environmental resiliency in coastal communities. Californians are taking note.

“The ocean must contribute more to the world’s food supply. We need aquaculture and agriculture to feed the future population,” said Jerry Schubel, president and CEO of the Aquarium of the Pacific. “The U.S. and California have the assets we need: markets, talent and technology, standards to protect the environment and people, and the working waterfronts.” 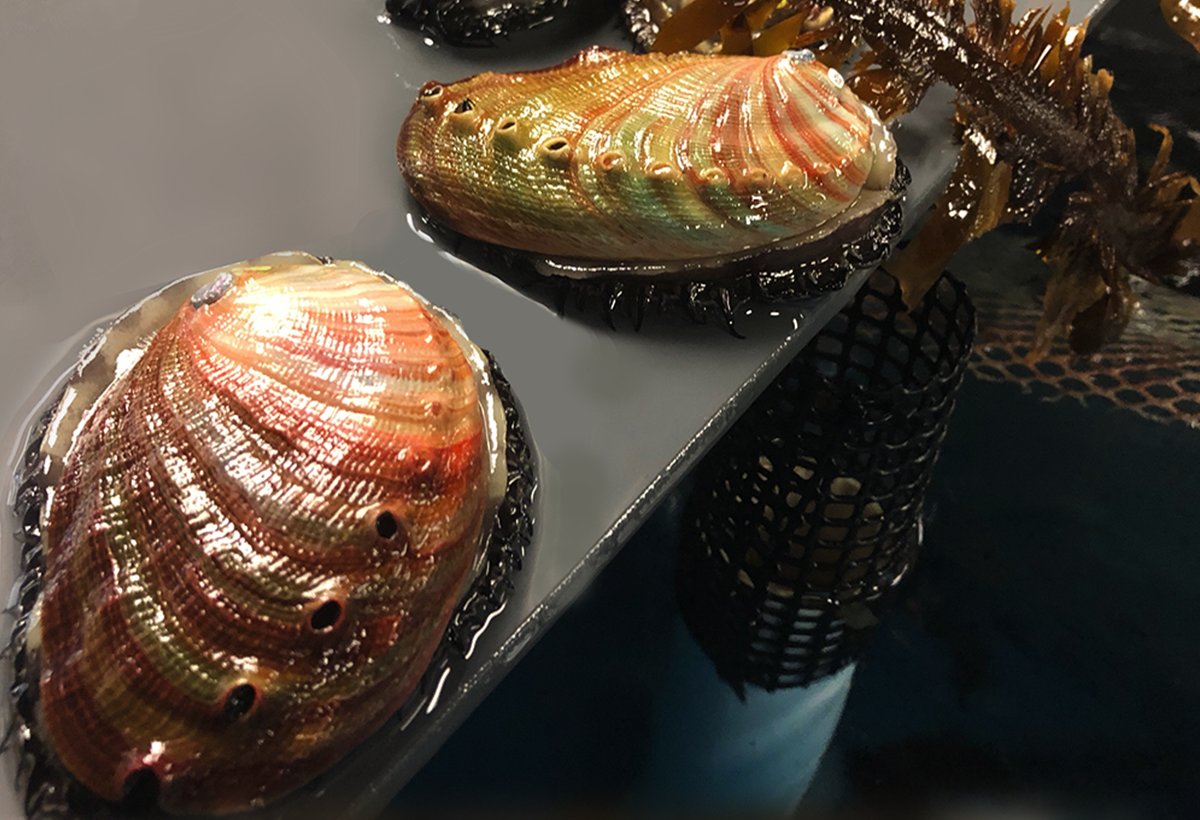 California red abalone are farmed under the pier in in Monterey Bay. Image by Heather Kramp

But advancing aquaculture production in California has been slow moving. There are numerous obstacles to growth in the state. Public perception, permitting, and regulations have been cited as barriers to industry progress.

The misconceptions and unfamiliarity with farmed seafood have limited market development in California. In part, misconceptions about aquaculture stem from outmoded practices that have long since been replaced with more efficient and environmentally responsible production methods.

The seafood rating program considers common issue areas like habitat, chemical use, and disease in their ratings. Currently, all recommendations from Seafood Watch for farmed seafood in the United States are either a green “best choice” or a yellow “good alternative.”

Prospective aquaculture farmers also face permitting challenges—no new areas in state waters have been leased in more than 20 years. However, officials at California Department of Fish and Wildlife are trying to make it easier to obtain leases and permits with a new website portal connecting multiple state, federal and local agencies to applicants. Additionally, state aquaculture coordinator Randy Lovell says marine finfish aquaculture in California has been blocked administratively until a new regulatory framework is established.

Support for aquaculture is growing. Environmental groups like Conservation International and The Nature Conservancy have thrown their support behind marine aquaculture as an important conservation tool.

Ports districts are also playing a more active role in aquaculture development. The Port of San Diego has been growing its portfolio of businesses to support entrepreneurship in the blue economy and recently invested in a pilot project with a floating barge made for oyster aquaculture. The Ventura Port District has been backing an open ocean mussel farming project called the Ventura Shellfish Enterprise.

Furthermore, new technologies have Silicon Valley entrepreneurs excited about the possibilities for the future. “The increased demand for protein and food that is compatible with a healthy environment is a significant challenge,” said Josh Silverman, chief product and innovation officer at Calysta. But he thinks that innovation can help meet the world’s growing demand for food and animal feed. For example, Calysta has developed an aquaculture feed made of natural microorganisms that can reduce the overall environmental footprint of production and improve product traceability.

Aquaculture proponents, such as California Assemblymember Mark Stone, see a future where ocean farms growing seaweed and shellfish are as common as strawberry fields. “We have some of the most productive agricultural fields in the country. People are used to looking at that agricultural view as they drive by, but don’t expect to see oyster beds or aquaculture farms on the coast. So how do we move forward? It’s going to be a big conversation with stakeholders and regulators,” he said.

“But I’m in for what’s next. This is something California can do—and should do—given our coast and place in the world.”