On the precipice: Study identifies California cliffs at risk of collapse

The yellow warning signs that pepper coastal cliffs from northern California to the US-Mexico border may seem overly dramatic to the casual observer. But actively eroding cliffs make up the majority of the California coastline, and sudden landslides and collapses have caused injuries and several fatalities in recent years. In addition, eroding cliffs currently threaten highways, houses, businesses, military bases, parks, power plants, and other critical facilities—all in all billions of dollars of development.

Research suggests that erosion rates will increase as sea level rises, further exacerbating these problems. “It is critical we study current and historical cliff retreat so we can better plan for the future,” says Adam Young, a researcher at Scripps Institution of Oceanography at the University of California San Diego who recently published a unique large-scale analysis of coastal cliff erosion in California.

The study, published in the journal Geomorphology and funded by California Sea Grant, provides accurate erosion rates for 680 miles of the California coast, from the US-Mexico border to Bodega Head in Sonoma County. It identifies areas that have eroded faster than others, and introduces a new experimental hazard scale to identify areas that may be at greater risk of impending collapse. It is the first such large-scale study in California using LiDAR data—laser elevation data recorded in aerial surveys—which were used to create detailed 3D elevation maps.

Existing cliff erosion studies are often small scale, use a variety of techniques, and often rely on lower quality data sources, providing a patchwork across the state. “What’s unique about this study is that it applies a consistent methodology across a very large area using accurate high-resolution laser data,” says Young.

Previous research has identified clear correlations between rainfall and coastal erosion in southern California, but the impact of storms waves has been more elusive. “It’s difficult to measure,” explains Young, “We lack field observations because with powerful waves crashing against the cliff, it is not an easy place to make measurements.” Variation in cliff geology, beach protection, exposure to weather, and other factors also complicate predicting erosion rates. 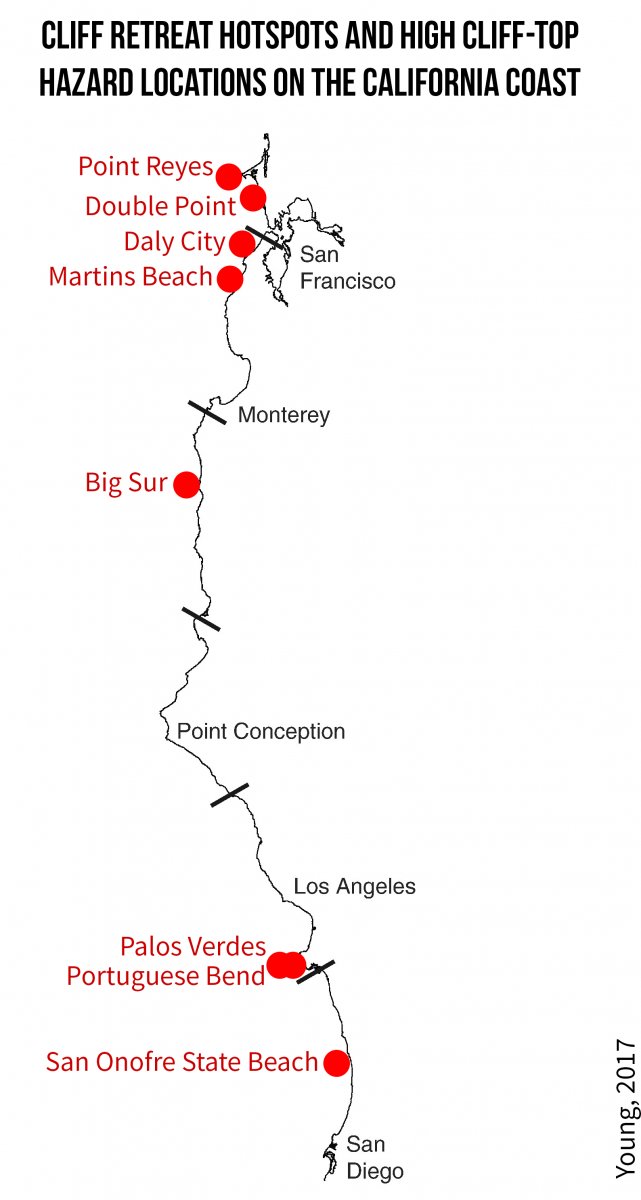 The study shows that the historical cliff erosion rate does not always provide a good prediction of future rates. “The results show that if a cliff experienced a large of amount of erosion during one time period, it was followed by a time period with very little erosion, and the cliff could be relatively stabilized for a time,” explains Young. “It will mobilize again, but we don’t know when and more research is needed to better understand the time cycles involved.”

Young also found that cliffs with high erosion rates in recent times were often preceded by time periods with very little erosion. These are key findings, because models predicting future cliff retreat are often based on projecting the historical rates.

Young also introduced a new experimental measure to identify the riskiest precipices. Previous research had suggested that the difference between erosion rates of the cliff face compared to the cliff top could indicate instability—in short, the cliff steepness. When he applied this hazard index, Young identified worrisome spots along the California coast, including San Onofre State Beach, Big Sur, Martin's Beach, and Daly City.

A reality check for planners

Young is currently working on a set of maps to be made available to the public, and he has presented the work at scientific conferences.  He says, “I hope that this study will help improve models that predict erosion, help identify hazardous areas, and assist policymakers who are working to protect our coast.”

The research has already caught the attention of planners at the California Coastal Commission, a state agency charged with preserving and protecting the coastline for current and future generations.

“The study could be particularly useful for local governments looking to update their local coastal programs in light of climate change and sea-level rise,” says Lesley Ewing, a senior coastal engineer for the commission. While the study does not provide projections for future erosion rates, researchers expect that sea-level rise will contribute to faster erosion rates and greater risk to public and private coastal property, and governments are working to plan for the impacts.

“The coast of California is stacked with very expensive real estate—not to mention power plants, wastewater treatment facilities, and highways,” she says. Some of this is already at risk—over 100 miles of shoreline armory has been built to protect it, and more will be at risk in the future.

“There’s so much opportunity to use this research—this could serve as a reality check for planners who often focus on specific regions and smaller scales,” adds Ewing.

The research was also supported by the California Department of Parks and Recreation, Division of Boating and Waterways.