Starting in 2007 California Sea Grant partnered with other orgnanizations and agencies in the state to administer research project funding for baseline monitoring of marine protected areas (MPAs).

The North Central Coast MPA Baseline Program ran from 2010 to 2016. This program was a collaboration of California Sea Grant, Ocean Protection Council, Department of Fish and Game, Ocean Science Trust and MPA Monitoring Enterprise to establish an integrated snapshot of marine ecosystems and human activities along the North Central Coast around the time of the establishment of the region's new marine protected areas, and to document initial socioeconomic and ecological changes after the MPAs take effect.

Baseline Characterization of Kelp Forests along the North Central Coast

An Analysis of Citizen-Science Data from LiMPETS

In this project, an existing citizen-science data set, collected through LiMPETS, short for Long-term Monitoring Program and Experiential Training for Students, will be analyzed and integrated into the baseline data being collected by the other research teams. The LiMPET data includes surveys of the Pacific mole crab, a denizen of sandy beaches, at 16 sites within the North Central Coast study region, including beaches in and around two of the new marine protected areas. It also includes a more diverse and complex data set of rocky intertidal ecology at four sites in the region, including areas in and around two of the new marine protected areas. The rocky intertidal survey data follow trends in 33 key invertebrate and algae species/taxa. Each of the 33 is surveyed for one or more of the following reasons: It is abundant, easily recognized, near the boundaries of its distribution limits and/or sensitive to trampling, harvesting and pollution. In addition to the existing LiMPETS survey sites, Farallones Marine Sanctuary Association staff and student volunteers will receive funding to monitor two existing sites for two years, to further enhance the creation of a meaningful benchmark for the North Central Coast. The LiMPETS program, by its very nature, prioritizes the teaching of science literacy and ocean stewardship. The data collected by volunteers, however, is also scientifically meaningful and complements the baseline studies being conducted by professional scientists.

Through the Reef Check Foundation’s California program, experienced recreational scuba divers are taught, tested and certified to collect scientifically robust survey data for 73 rocky reef indicator species. Its monitoring program, ongoing along the North Central Coast since 2006, is a highly cost-effective means of gathering economically and ecologically important data, and is invaluable in educating the public about scientific methods and environmental stewardship. For the baseline project, Reef Check California volunteers will continue to monitor key indicator species annually at their existing five sites within and outside the new marine protected areas and will add abalone and urchin surveys to four of the protected areas and associated reference sites to be surveyed by Mark Carr’s group at the University of California, Santa Cruz. Fish surveys will also be added to four ongoing abalone and urchin surveys, conducted by the California Department of Fish and Game. During the course of the project, the Los Angeles-based non-profit plans to train about 32 new citizen-scientist divers in partnership with the Bodega Marine Laboratory’s scientific diver class and Sonoma State University’s recreational diver program. Data collected by the highly trained volunteers will be integrated into the final scientific report and compared to data collected by academic and agency staff to identify the most appropriate role for citizen science in monitoring protected areas.

An Analysis of Citizen-Science Data Collected through "Beach Watch"

Data collected by the citizen science Beach Watch program at sites inside and outside of the new North Central Coast marine protected areas will be analyzed to understand regional variation in monitored species. The Beach Watch program is a public-private partnership of NOAA's Gulf of the Farallones National Marine Sanctuary and the Farallones Marine Sanctuary Association to study and protect the shoreline of the Gulf of the Farallones and northern portion of Monterey Bay. Through Beach Watch, volunteers are trained to collect a wide variety of shoreline data, including beach deposition rates of seabirds and marine mammals (i.e., counts of dead animals), bird and mammal species composition and abundance, and estimates of coverage by beach wrack. Beach Watch volunteers have been surveying the Gulf of the Farallones and Monterey Bay since 1993. The foremost goal of this project is to produce a benchmark for the diversity and abundance of birds and marine mammals along the North Central Coast. A subsequent data analysis will illuminate historical trends in bird and mammal species of interest. Other project goals include summarizing human-use data, contributing to an assessment of ecosystem conditions, and educating the public about scientific methods and marine conservation.

The Farallon Islands – “California’s Galapagos” – support nearly a third of the state’s nesting seabirds. By protecting seabirds’ foraging grounds, prey populations and breeding colonies, the North Central Coast marine protected areas stand to benefit seabirds such as the pigeon guillemot, pelagic cormorant, Brandt's cormorant, common murre and black oystercatcher. Several special closure areas, established as part of the marine protected areas network, will require that vessels keep at least 300 feet or 1,000 feet (depending on the closure) from important breeding colonies. It is hoped that the special closures will protect birds from disturbances that can cause breeding failure and even colony abandonment. The goal of this project is to expand existing seabird monitoring programs, led by U.S. Fish and Wildlife Service and PRBO Conservation Science, to create a baseline of seabird population sizes, reproductive success and foraging distributions relative to the newly established marine protected areas, including the special closures. Expanding these studies will allow scientists to test whether the protected areas are indeed benefiting seabirds and if not how to adaptively manage the protected areas so that they do.

Researchers will collect a comprehensive baseline description of sandy beach biodiversity along the North Central Coast. To accomplish this, six marine protected areas (Saunders Reef, Salt Point and Duxbury State Marine Conservation Areas, and Bodega Head and Montara Marine Reserves) and six reference sites will be surveyed for abundances of shorebirds and macrophyte wrack seven times annually for the first two years of the project. Larger invertebrates will be surveyed, though less frequently. Recreational fishers (using standardized gear and catch-and-release) will gather information on the abundance, diversity and size structure of surf-zone fishes. A pilot citizen-science project will also be launched in the hopes of establishing long-term monitoring of target invertebrate species, shorebirds and beach wrack. In addition, the project has a socioeconomic component in which scientists will document common recreational activities (i.e., surfing, dog walking and beach fishing) and their effects on beach plants and animals. As scientists involved in this project have documented, sandy beaches provide vital foraging grounds for shorebirds and are an important source of small invertebrates for several species of surf-zone fishes.

The goal of this project is to produce a baseline characterization of rocky intertidal ecosystems in all of the marine protected areas and associated reference sites along the North Central Coast, to enable future comparisons of marine life inside and outside the protected areas. Surveys will be conducted in 2010 and 2011, following the same protocols used for benchmark characterization of the Central Coast study region. These protocols, in turn, replicate those used by two ongoing long-term monitoring programs: MARINe, short for Multi-Agency Rocky Intertidal Network, for assessing communities of target species such as abalone, sea palms, mussels and sea grass; and PISCO, short for Partnership for Interdisciplinary Studies of Coastal Oceans, for assessing biodiversity. Thirteen of the sites to be included in the baseline characterization are already part of these two monitoring programs. The data to be collected during this project will greatly facilitate efforts to understand the impacts of the new marine protected areas. Following the data collection stage of the project, statistical analyses and geospatial modeling will be conducted to compare species abundances, patterns of diversity and community structure among protected areas and reference sites. To better understand the effects of the protected areas on a broader spatial scale, scientists will analyze the regional data within the context of rocky intertidal survey data collected along the entire West Coast. The analysis will explore species and species complexes as ecosystem indicators.

Baseline Collection of Socioeconomic Data for the North Central Coast

The types and intensities of activities that people engage in along the North Central Coast — be it surfing, dog walking, fishing or boating — will greatly influence the region’s ecological response to the new marine protected areas. The purpose of this project is to characterize human activities, within and outside the protected areas, in terms of their prevalence, spatial distribution and economic impact. This benchmark of human uses will then be integrated into the ecological indicators of the protected areas' performance. Besides the overarching theme of characterizing coastal-use patterns, specific data to be collected include: vessel operation costs, trip expenditures, and demographic characteristics of consumptive and non-consumptive users. The three major sectors of coastal user communities to be studied are: 1) private recreation, consumptive and non-consumptive; 2) commercial fishing, and 3) commercial charter, including consumptive and non-consumptive activities, such as commercial passenger sport fishing and whale watching. The core outcome of this project will be a series of standardized, fully documented, georeferenced, quantitative socioeconomic data sets, which together create a benchmark for the current extent, pattern and importance of consumptive and non-consumptive human activities along the North Central Coast. The approach will be such that it may be easily replicated for future long-term monitoring.

Aerial imaging technology, coupled with multispectral analyses, will be employed to map habitats and coverage of macroalgae, plants and bottom substrates in subtidal and intertidal ecosystems along the North Central Coast, at resolutions ranging from 40 centimeters to 2 meters. The high-resolution, geo-referenced maps will make it possible to evaluate changes in kelp coverage and other indicators over time, within and outside the marine protected areas. Because kelp cover and other indicators may vary on seasonal cycles unrelated to the new regulations, scientists will conduct time-series analyses to estimate persistent (average) and variable components of kelp, eelgrass, surf grass and pickle weed distributions. Substrate will be classified and then validated in the field. The final products will include a set of raw-image data files, calibrated and assembled, as well as GIS-compatible habitat maps.

A vast amount of new biological and socioeconomic data will be gathered during the North Central Coast baseline program. In this project, a researcher will conduct statistical analyses of existing physical and biological data in the study region to assess the status of the ecosystem at the time of the establishment of the marine protected areas. Mathematical techniques such as Principal Components Analyses will be used to derive indicators of marine life and oceanic conditions. The primary goal is to place the benchmark data, inside and outside the marine protected areas, within the context of climate variability such as El Niño/La Niña episodes and flip-flops of the Pacific Decadal Oscillation. The results of this project will facilitate future monitoring efforts by creating a template for compiling and analyzing groups of data sets, while the contextual analysis will help distinguish broad climatic trends from changes associated with the new regulations. 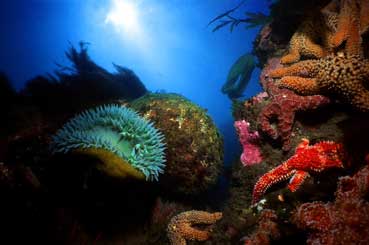