California’s coastal ecosystems face many threats from invasive species, including freshwater quagga and zebra mussels as well as saltwater organisms that can be transported on boat hulls. To control these threats, many tools are available, but new research suggests that the key to success is an integrated strategy.

While integrated pest management is commonly used in farming and urban areas, it has not yet been applied widely in lakes and oceans. Two collaborative studies from California Sea Grant, UC Santa Barbara, UC Division of Agriculture and Natural Resources, and Scripps Institution of Oceanography, provide guidance on how to apply the principles to help manage fouling on boat hulls in saltwater and reduce impacts of quagga mussels in freshwater habitats.

The studies are part of a special issue of the North American Journal of Fisheries Management: Integrated Pest Management in Aquatic Environments.

“With integrated pest management you’re looking for multiple ways to manipulate vulnerabilities of a pest, targeting different life stages with different methods in a combined way that can reduce the pest population with minimal harm to people and the environment. Often there is concentrated effort on controlling one part of the life cycle – like removing adults—which are easier to see—without thinking about the larvae that are out there,” says California Sea Grant Extension Specialist and lead author Carolynn Culver. Culver conducts statewide research, outreach and education through her base at UC Santa Barbara and academic appointment at Scripps Institution of Oceanography.

A better way to clean your boat

The first study assessed an integrated management framework that Culver and colleagues had developed to manage biofouling on boat hulls, while balancing both boat operations and ecosystem health. The study describes how, when applied as part of an integrated framework, a combination of non-toxic methods can help maintain clean boats without use of toxic paints and coatings that are now increasingly being regulated because of environmental impacts.

Biofouling refers to the growth of organisms such as algae, barnacles, and other marine and aquatic plants and animals that settle on hard surfaces such as piers, pilings, and boat hulls. 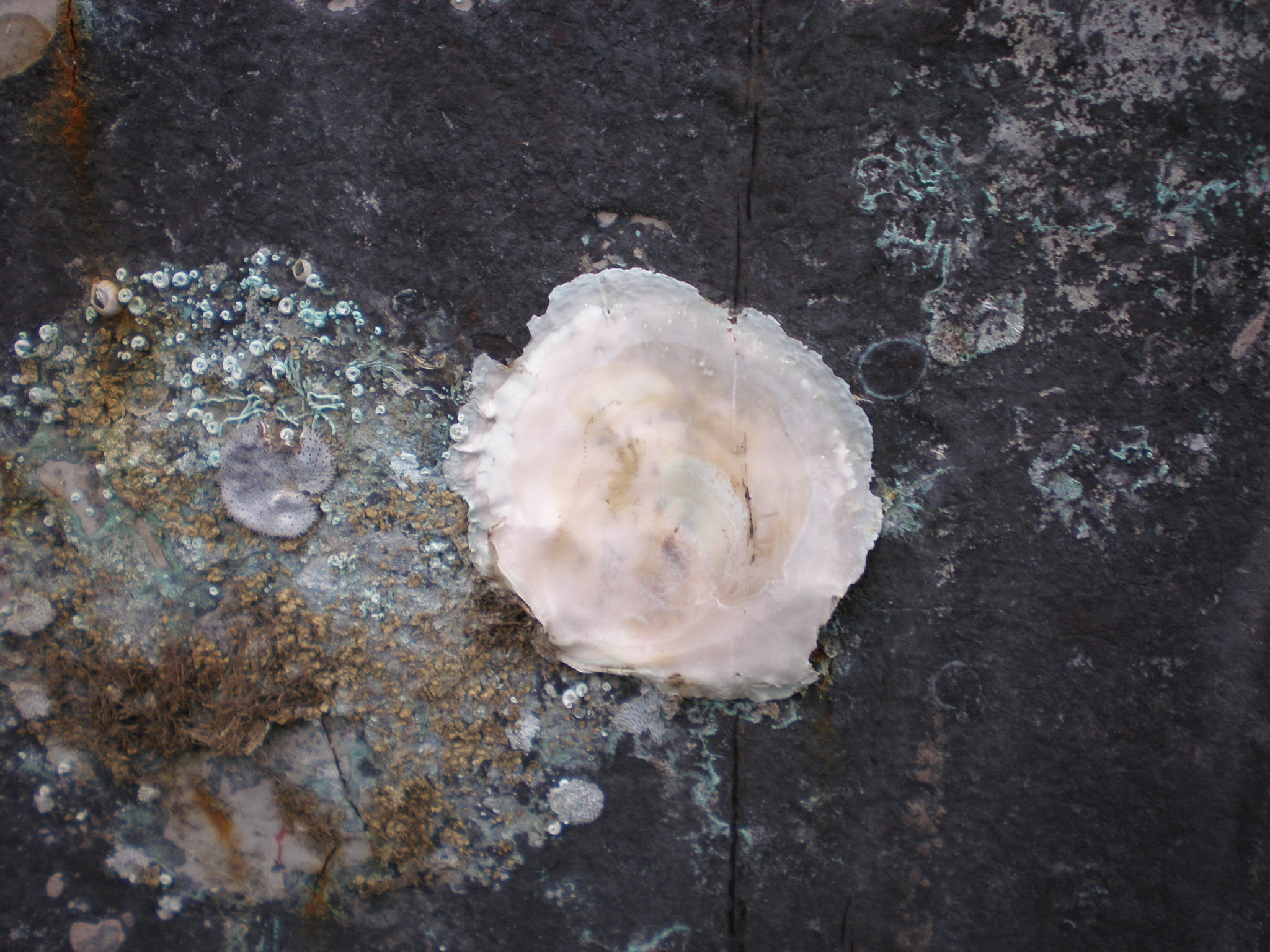 Organisms such as algae, barnacles, and other marine and aquatic plants and animals that settle on hard surfaces such as piers, pilings, and boat hulls. Photo: Center for Lakes and Reservoirs“Controlling the growth of these organisms is critical for boat maintenance, because they create drag that slows vessels, reduces fuel efficiency, and makes boats harder to steer. However, the methods used to control fouling on boats can impact water quality and increase transport of invasive species so it is important to consider all of these issues when deciding how to maintain a clean hull,” says co-author Leigh Johnson, Coastal Advisor Emerita with UC Cooperative Extension and former California Sea Grant Extension Advisor. Johnson was instrumental in initiating the research, and bringing attention to the need for a balanced biofouling control management approach.

The primary method of controlling biofouling around the world has long been toxic antifouling paints. But there are growing concerns about the impacts of currently used copper-based paints on water quality, and many countries and US states including California and Washington have set standards to reduce the copper levels and leaching rates of antifouling paints. These actions, however, increase the risks of moving biofouling invasive species from place to place, including vulnerable ecosystems such as the islands off the coast of California.

In this study, researchers tested a variety of hull coatings, California-based hull cleaning practices, and conditions in various California harbors, to identify methods that could be used in combination to control biofouling.

They found that although copper-based paints were effective when first applied, they lost effectiveness fairly quickly, and that non-native species tended to accumulate first on the toxic coatings sometimes within just a few months. They also showed how frequent, less abrasive in-water hull cleaning was effective and did not cause an increase in fouling as reported for other hull cleaning practices. Their documentation of the time of year when different organisms were attaching to surfaces also helped to illustrate how adjusting timing and frequency of hull cleaning could help increase effectiveness.

Results from the study, along with other research findings, informed the development of an integrated pest management framework that boaters can adapt to different regions and specific needs.

“It’s not a one-size-fits-all approach—it’s adaptive. Boaters can tailor it to local environments, regulations, and boating patterns, and it can be applied in areas where toxic paints have been restricted, as well as where they continue to be used. It can help to keep boat hulls clean, while reducing impacts on water quality and transport of invasive species – three issues that often are not considered together,” says Culver.

Culver and colleagues have provided information to boat owners, resource managers, and regulators about application of this integrated approach, and she says there has been interest in using it to inform biofouling management guidance and regulations in California and elsewhere.

In a second study, Culver and colleagues explored whether certain species of sunfish could be used as a biological control method to help manage invasive freshwater mussels in Southern California lakes.

The quagga mussel and closely related zebra mussel are two of the most devastating aquatic pests in the United States. The small freshwater mussels grow on hard surfaces such as water pipes, and can cause major problems for water infrastructure. They can also negatively impact ecosystems and fisheries by feeding on microscopic plants and animals that support the food web. First introduced to North America in the 1980s, they were introduced in California in 2007. The cost of managing these mussels is estimated at billions of dollars since their introduction into the U.S.

Culver has worked closely with lake and reservoir managers in California to help them prepare for and respond to mussel invasions. This research was needed, she says, because many of the control systems long used in other places were developed for facilities and involved chemical applications or toxic coatings that can’t be readily used in California in bodies of water that serve as sources of drinking water, or are home to endangered species that could be hurt by the chemicals – the majority of California locations that have mussel infestations.

The study found that one species of sunfish, bluegill, when penned up in an area where mussels occur, could significantly reduce microscopic larvae and newly settled young mussels on surfaces within the pen, and on the pen itself. This method could be one key piece of an integrated pest management strategy, and provides a new, non-chemical method for targeting early life stages of the mussels, which are hard to detect. 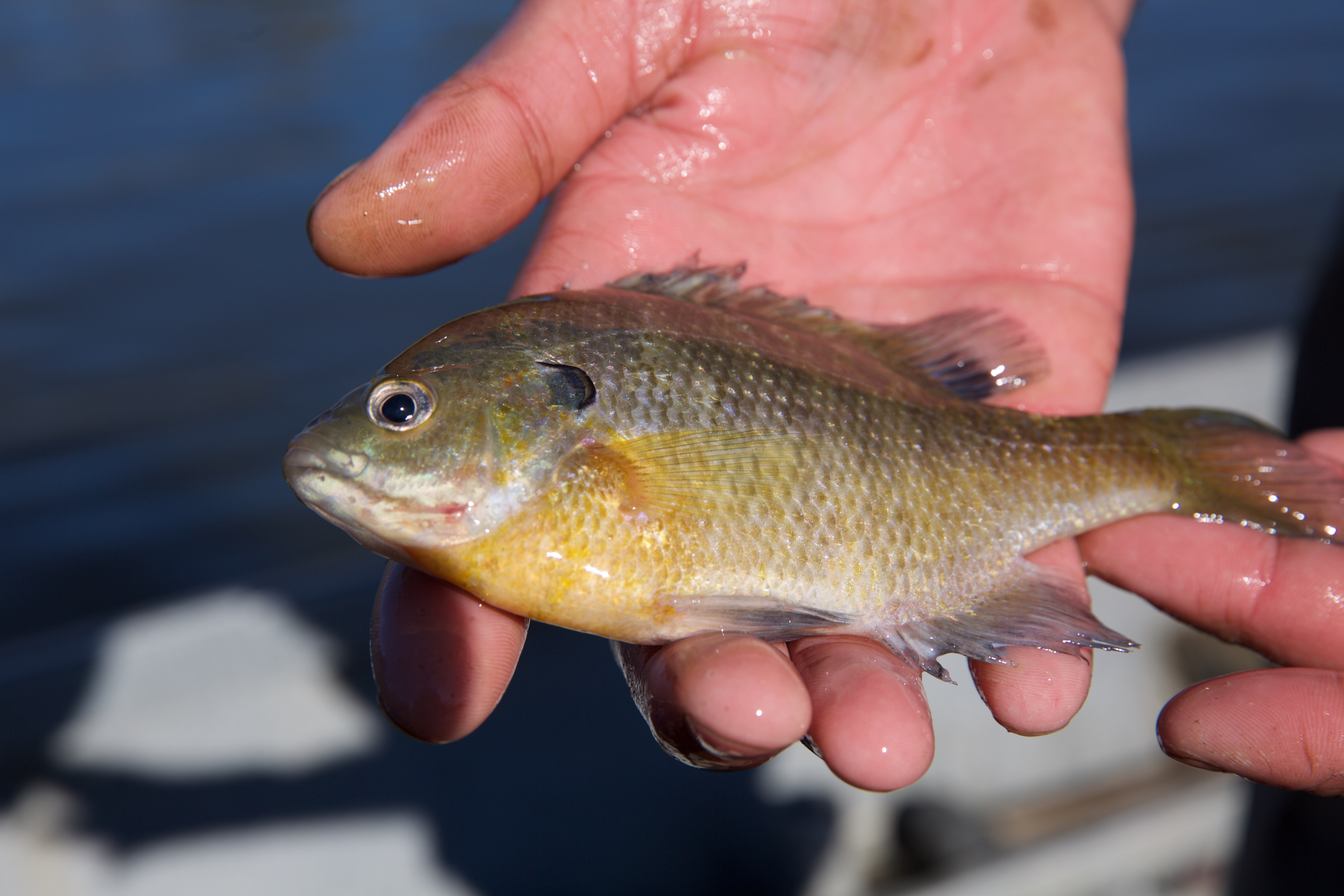 Bluegill, when penned up in an area where mussels occur, could significantly reduce microscopic larvae and newly settled young mussels on surfaces within the pen. Photo: USFWS

“Essentially you can put these fish to work in specific areas where mussels occur,” says Culver.

The researchers studied two species of sunfish which are resident in many infested southern California lakes, lakes that are human-built and nearly all serve as water supplies. Although not native to California, they were stocked into these man-made reservoirs. They say that the methods could be applied to other predatory species in different places, but no other good candidates were available where they were working.

“Commonly used mussel control methods are problematic for San Diego reservoirs since they are primary water supply reservoirs. When an initial infestation occurred, many of the city’s reservoirs experienced rapid colonization by the mussel, causing docks and buoys to sink,” says study co-author Dan Daft, a Water Production Superintendent and biologist with the city of San Diego. “Biocontrol agents offer an ecologically-sound solution for minimizing pesticide use, as well as human contact required to remove mussels mechanically."