On a sunny day, the water in La Jolla Cove in San Diego can be as clear and blue as a tropical lagoon. Tourists and locals flock to the cove and cliffs to swim, snorkel, dive, and kayak, delighted by abundant fish, birds—even an occasional sea turtle.

But the cove was also one of the riskiest beaches for recreation in California in the last year, regularly exceeding health standards for bacterial levels. La Jolla Cove received a “D” grade on the annual Heal the Bay Water Quality Report Card in 2017, ranking fifth on a list of the most polluted beaches in California. Other especially risky beaches included Clam Beach in Humboldt County, San Clemente Pier in Orange County, Cowell Beach in Santa Cruz, and Lakeshore Park in San Mateo. Bacteria and viruses in the water can lead to skin infections, respiratory ailments, and stomach bugs.

Could tracking the contamination to its source help beach managers clean up these problematic California waters? A current research project funded by California Sea Grant aims to do just that, by developing risk-based thresholds for new genetic markers of contamination. These new tools could allow beach managers to make better decisions about when to put up beach water quality advisories, as well as provide more information about actions they could take to reduce the risk of illness.

“This is crucial for beach managers because there are so many possible sources of fecal contamination—from birds to dogs to humans—and the solution to the problem depends on knowing which source is prevalent,” says Steve Weisberg, executive director of the Southern California Water Research Project, a public agency for environmental research in California. 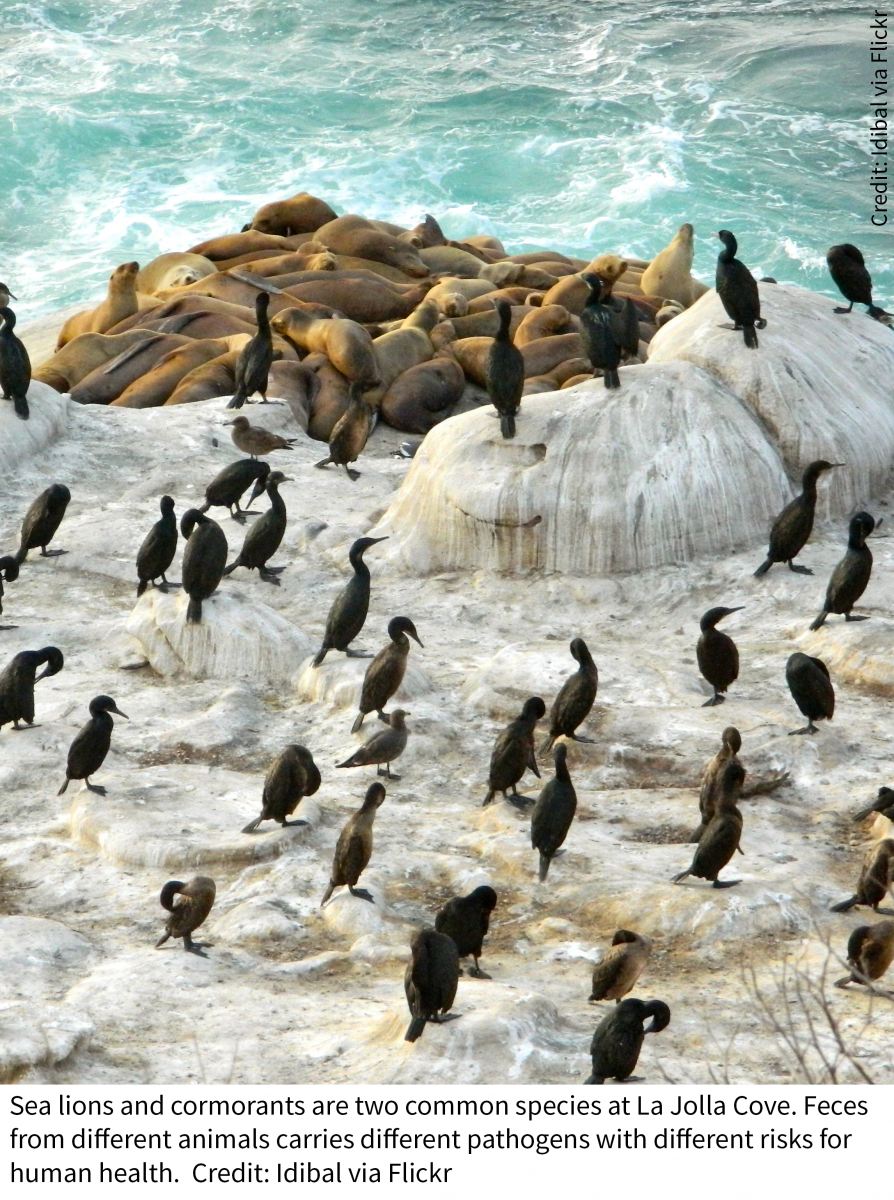 Water quality guidelines set by the Environmental Protection Agency are designed to protect swimmers from illness.  If their guidelines are met, then no more than 3 out of 100 swimmers will get sick. In California, the guidelines have been translated into thresholds for three types of bacteria: total coliform, E. coli and enterococci.

The problem is that these bacterial markers don’t tell managers what’s causing the contamination. Stanford University researcher Alexandria Boehm, who is leading the research, says, “We know that total coliform, E. coli and enterococci can come from a lot of different sources. They can be found naturally in the environment, in high concentrations in beach sand, and kelp, and they can come from animals other than humans.”

“We’ve been using indicator bacteria to measure health risk in waters for almost 100 years. In the meantime, science has made huge advances in our understanding of microorganisms,” says Boehm. “I think we’ll be doing something different in future, as we improve our understanding of beach contamination, where it’s coming from, how we can remediate it, and what kind of risks it carries.”

That’s why Boehm and colleagues are working to translate new technologies, known as microbial source tracking (MST) markers, into tools that beach managers can use to estimate the risk of swimmer illness. These measures could be an improvement over current methods because they show where the contamination came from—whether it is human feces or from a specific animal.

“Different animals carry different pathogens. For that reason, there are different risks associated with exposure to their feces in water,” explains Boehm.

The new measures would also give beach managers the knowledge to target the sources of illness. Boehm says, “Remediation measures one might take are very different for different sources. For example, if a measurement identifies human feces in the water, beach managers could check for sewer leaks or may decide to keep public bathrooms open overnight to reduce open defecation. If the contamination comes from gulls, communities may decide to erect nets or sturdier trash cans to discourage birds from gathering in the area.”

From research to action

MST markers have been available for a decade, and beach managers have begun using them to supplement the traditional bacterial counts. However, there are no guidelines for interpreting the MST marker concentrations that beach managers measure, and no thresholds for deciding whether the MST marker concentration is high or low. Boehm and her colleagues are developing risk-based thresholds for a variety of MST markers including those that detect human, gull, pig, and cattle feces. They are also working on thresholds that would apply for waters with mixed fecal sources or for aged fecal sources.

Results of the work have been published in several journals, and Boehm has presented her work at water quality manager working group meetings in Northern and Southern California, to wide interest. For the next stage of her study, Boehm is looking at how the age of fecal matter affects illness risk, which could inform the creation of the MST marker thresholds.

As the winter season brings more rains to California, Boehm and other water quality experts advise people to avoid swimming or surfing after heavy rains, stay away from river mouths and storm drains, and keep an eye on water quality reports which are available online.

Doug Burleigh, a daily La Jolla Cove swimmer, has no plans to stop swimming at the cove, but he says that he welcomes more research on the topic and supports actions that could make the water safer for everyone who enjoys it.