“One more time, I’m going to start the camera now,” Jessica Madden takes a deep breath and dives ten feet down to the sea floor, where she has just placed an instrument known as a Baited Remote Underwater Video (BRUV). The BRUV consists of a GoPro attached to a piece of PVC pipe, the camera aimed at a bag of chopped squid. Anchoring herself to the ocean floor with slow kicks of her flippers, she checks the camera alignment, then presses the record button and flutters back up to the surface for another deep breath. “Now we wait.” 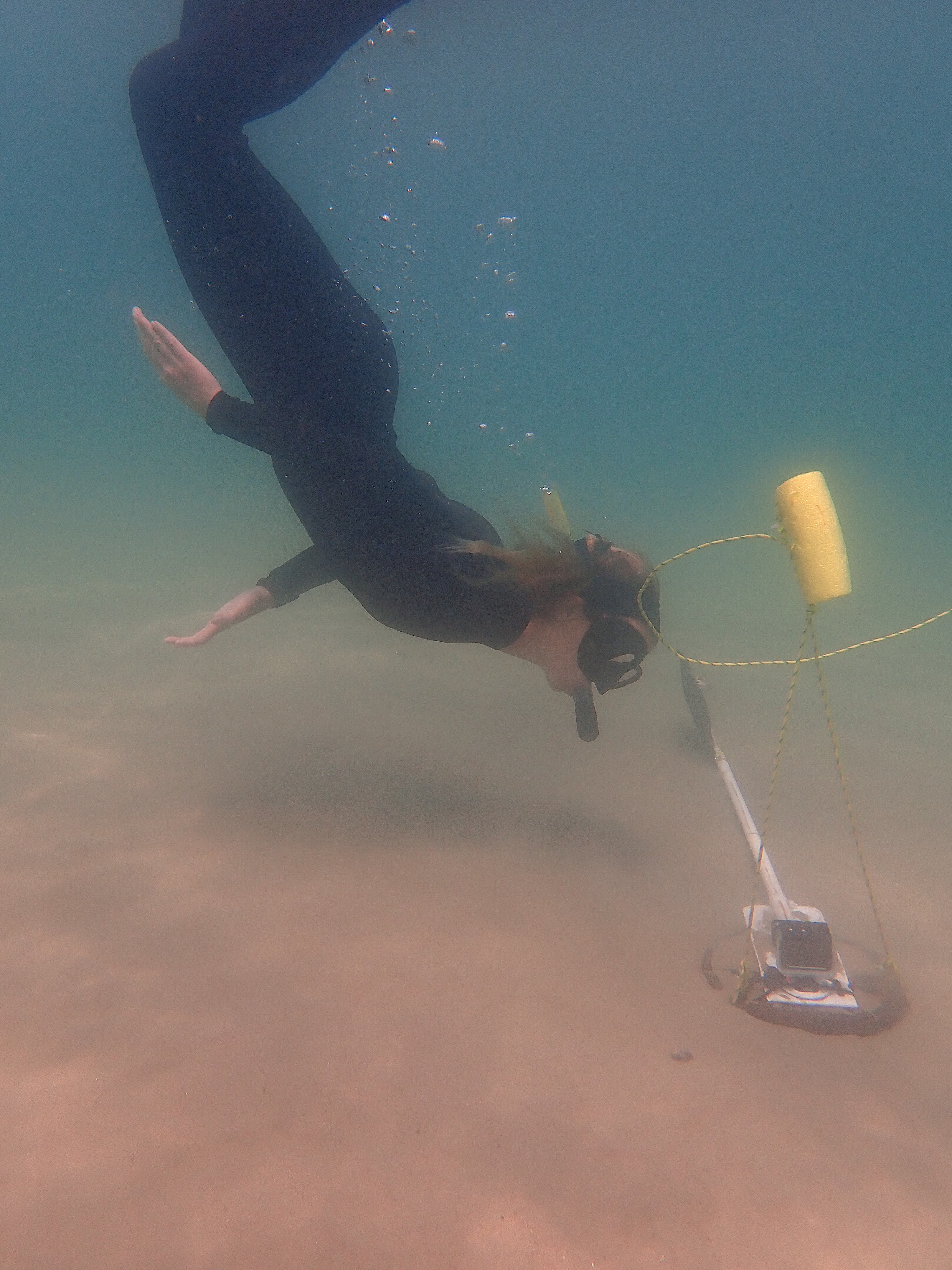 Deploying a BRUV in the surf zone.Madden, a graduate student at UC Santa Barbara, and her colleagues have placed six BRUVs this afternoon—a beautiful day in September—just past the breaking waves near Scripps Pier in La Jolla. They will wait an hour before diving back in to collect the equipment, and later download and carefully screen through the videos to catalogue all the species they caught on camera, attracted by the bait.

In the meantime, she joins the rest of their team who are preparing to drag a large beach seine net through shallow water to shore. They’ll then catalog and weigh all the fish, invertebrates, and seaweed they pull in, before carefully releasing them all back into the ocean. The team will also measure the waves and swash and survey the beach, counting seaweed, birds, and people they observe, as well as any trash and oil they may find on the beach.

The data they collected today, along with 27 other beach sites along California’s long coastline over the summer and fall, will be sorted and analyzed over the next two years. It is one of seven large-scale Marine Protected Area (MPA) monitoring projects funded by the California Ocean Protection Council in partnership with California Department of Fish and Wildlife and California Sea Grant. (For a preview of the underwater footage, scroll down).

Led by UC Santa Barbara researcher Jenny Dugan, the team—which includes researchers from six different institutions, a number of graduate students, and volunteers, have just wrapped up their first year of monitoring, and are continuing with statewide bird surveys on the study beaches through the winter months.

“The overall goal is to evaluate the performance of MPAs statewide, in our case looking at sandy beaches and surf zones,” says Dugan. “We’re surveying beaches and surf zones at paired sites located inside and outside of MPAs, measuring indicator species—birds, kelp wrack, invertebrates, and fish—to learn if these indicator groups differ in numbers, size, biomass, and diversity inside MPAs compared to reference sites that are relatively similar.”  Wherever possible the new data will be compared with data from the baseline and other studies to analyze changes in these indicators since the MPAs were established.

These data—along with the other long-term MPA monitoring projects—will help researchers and California natural resource managers understand if California’s MPA system is working as intended as a refuge for ocean species and a tool to enhance abundance and diversity of ocean ecosystems. Combined with previous baseline monitoring projects and continuing monitoring efforts, the data will contribute to a long time-series that should help California both assess the success of the MPA system in achieving conservation goals, as well as provide insights in how climate change is affecting the ocean ecosystem. 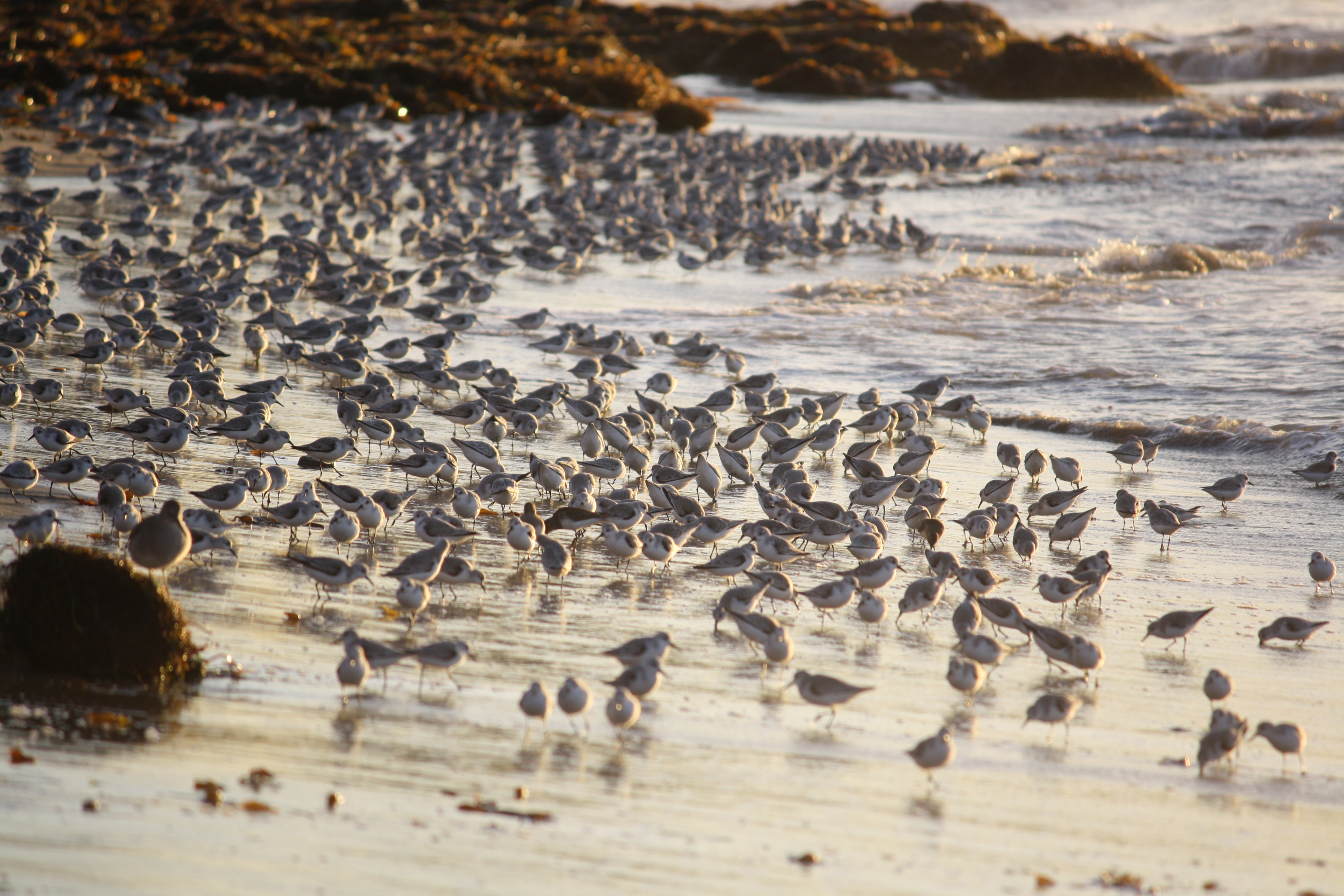 Shorebirds and kelp wrack on a winter morning at Campus Point SMCA. Results of baseline beach surveys showed a clear connection between kelp wrack and the abundance and diversity of shorebirds—one potential example of a beneficial spillover effect resulting from California’s MPA system. Photo: David Hubbard

Clues from the beach

Dugan’s team has only begun the huge task of analyzing their data, which includes hundreds of hours of underwater video footage, as well as pages of field data on animal types and counts, seaweed types and weights, and other observations. So it’s too early to draw conclusions from the study. Yet already, Dugan said, it’s clear just how much the beach and surf zone can tell us about the health of the nearby ocean.

“Sandy beaches and surf zones are a great place to evaluate both indirect and direct responses of marine life to MPAs,” explains Dugan “There’s a lot of recreational fishing in the surf zone of beaches. This means in an MPA where fishing is restricted you could see increased numbers and sizes of commonly fished species. This MPA effect might be especially noticeable for species like surfperch or sharks and rays, whose young do not disperse far from their parents.”

While the direct effects of fishing closures may be easy to see, the condition of surf zones and beaches may also show the influence of what’s happening deeper in the ocean, Dugan says. “One of the major questions about MPAs is the potential for spillover of harvested species or other beneficial species as either adults or larvae —this is one way that MPAs could positively affect areas outside of MPAs,” Dugan said.

The kelp exported from healthy reefs and kelp forests is a major source of organic matter that fuels the rich food webs of beach ecosystems. This drift kelp export is another potentially beneficial type of spillover from MPAs. Dugan said, “Our MPA baseline studies showed that sandy beaches located close to healthy kelp forests tend to have higher diversity and abundance at all levels of the food web reaching from sand crabs up to birds and fish. In our beach seines and surveys, we estimate the extent of this spillover by measuring the abundance of drift kelp or wrack delivered from rocky reef and kelp forest ecosystems. Tracking the cascade that starts in nearshore kelp forests and reefs and extends to beaches and surf zones via kelp wrack will provide valuable insights on one of the key indirect effects of MPAs on California’s coastal ecosystems.” 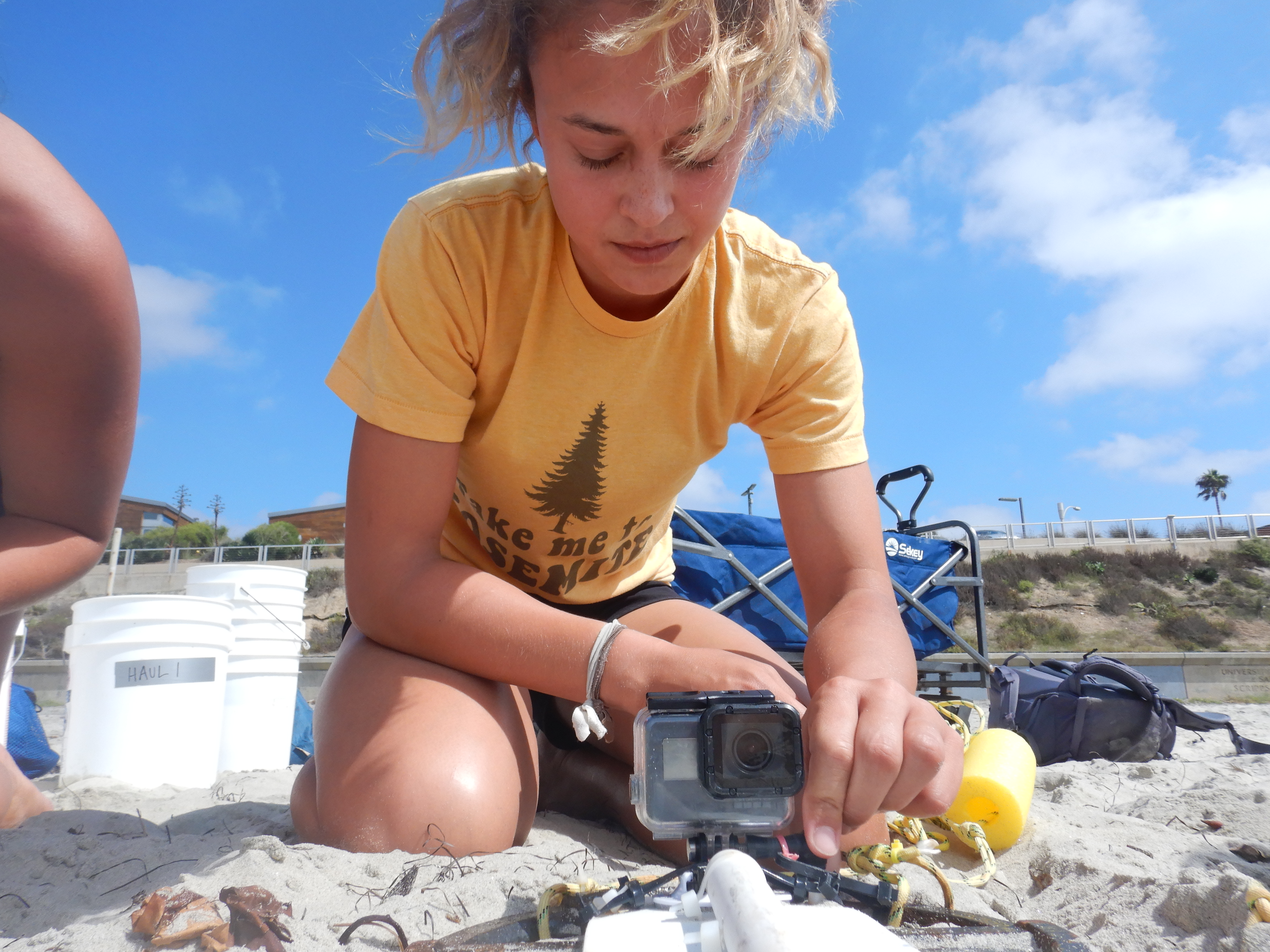 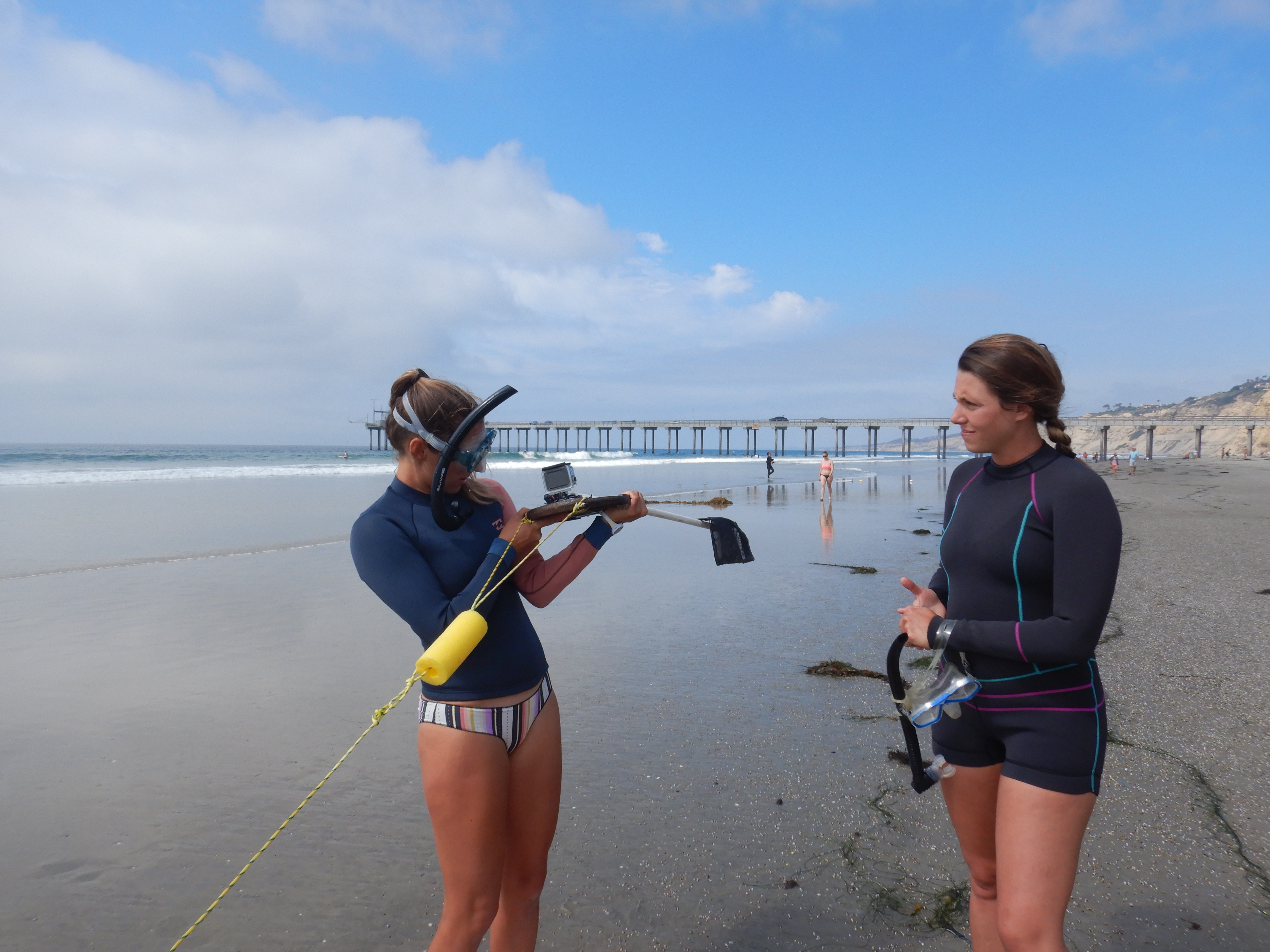 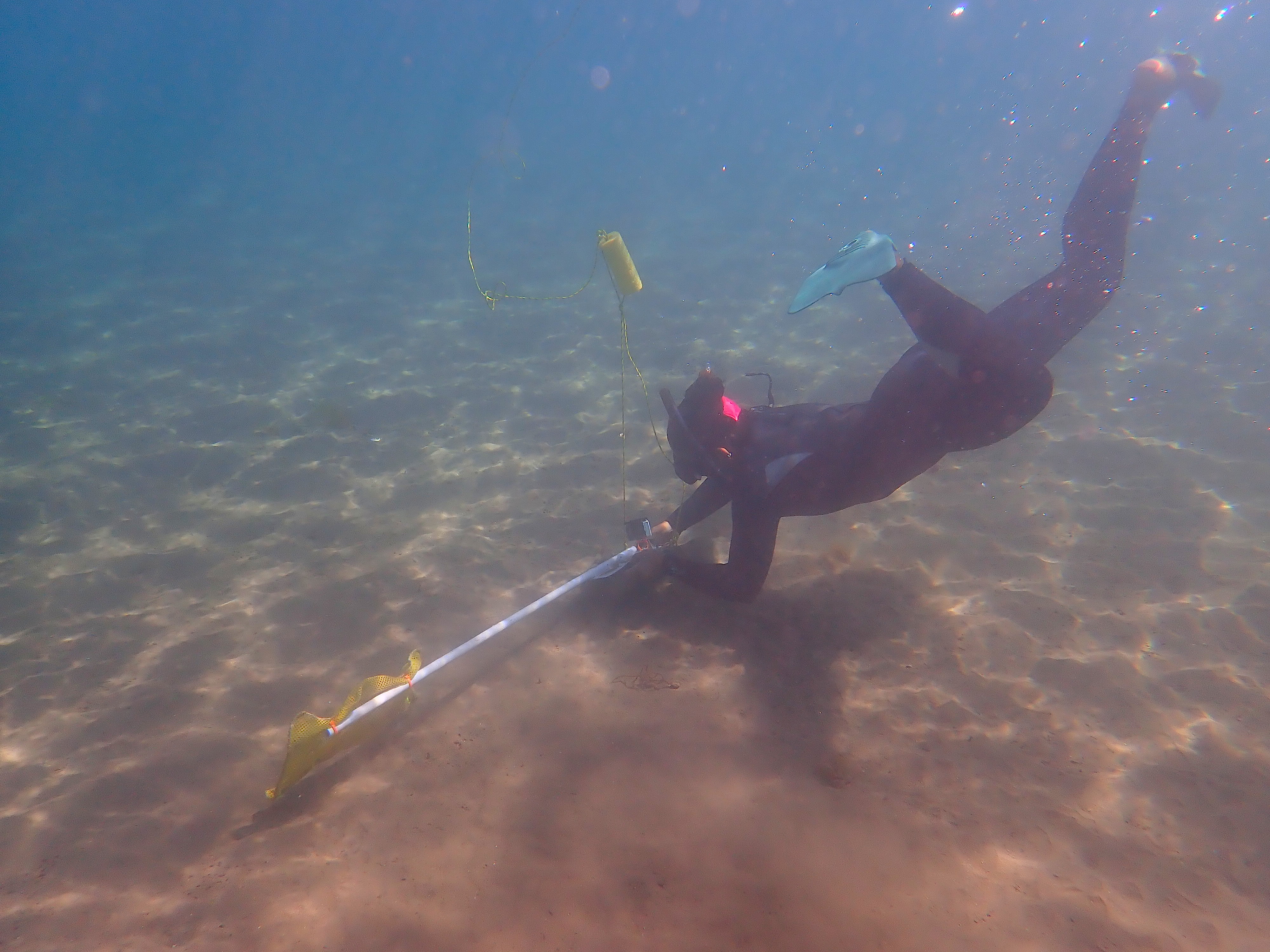 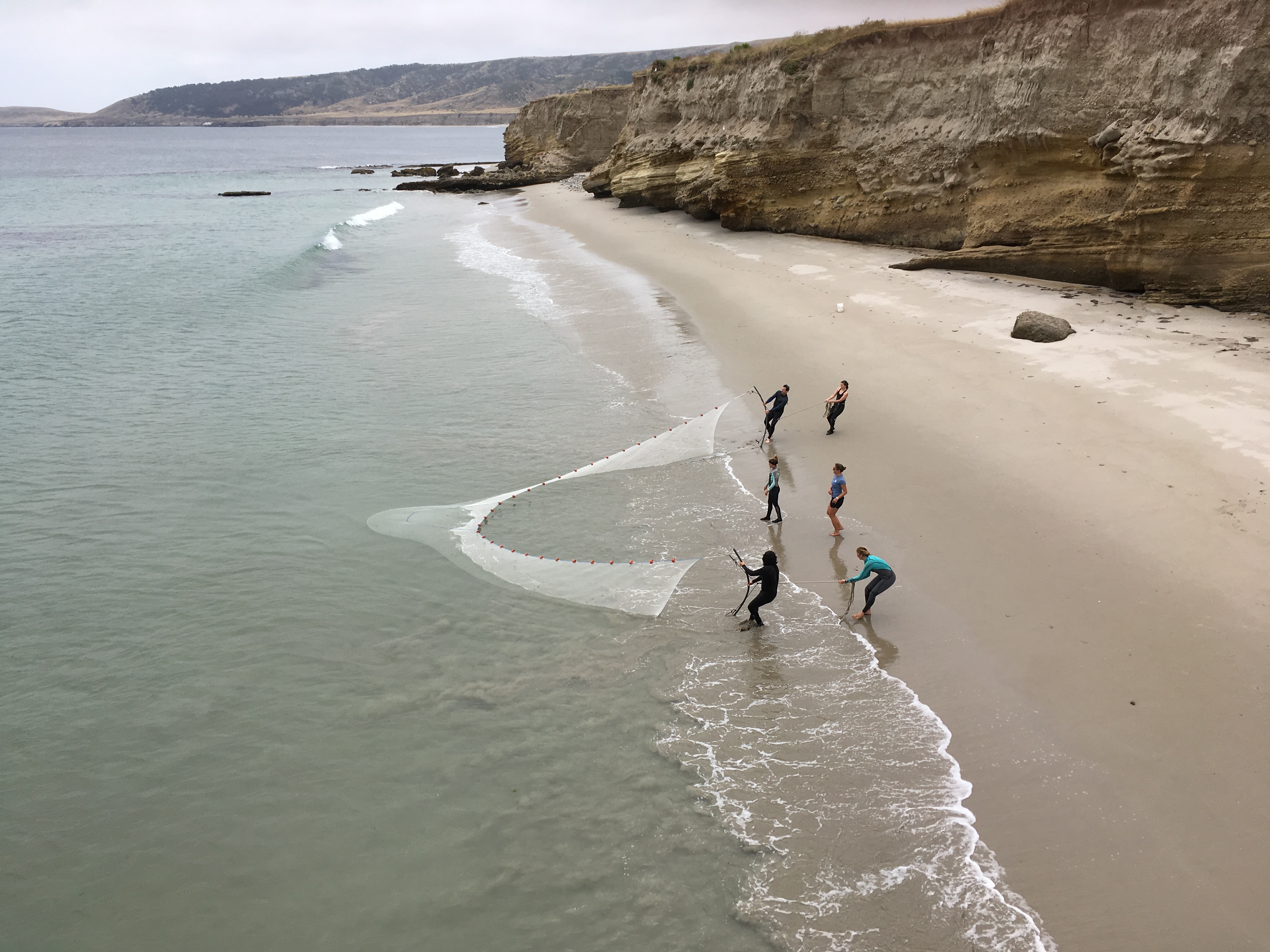 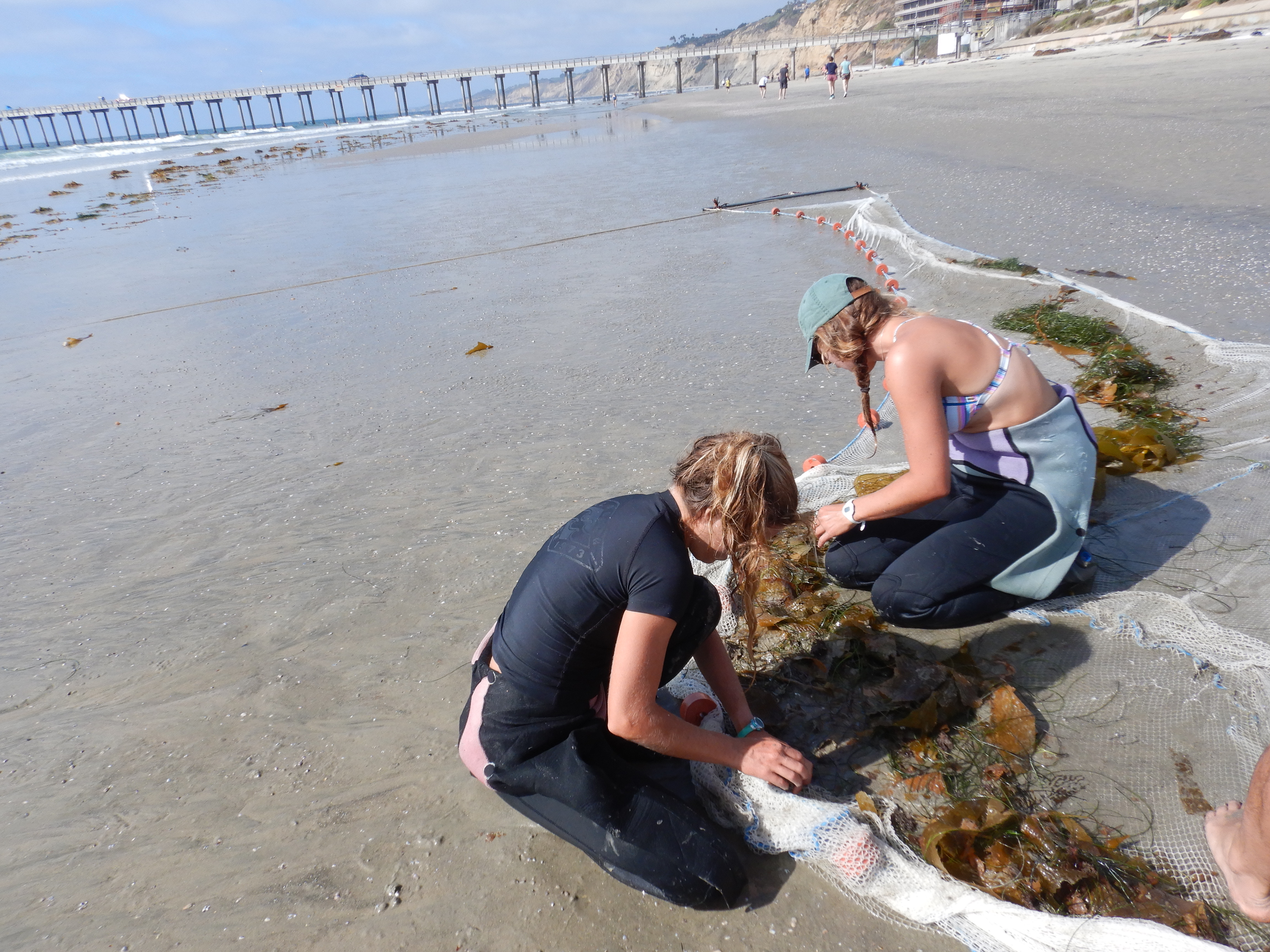 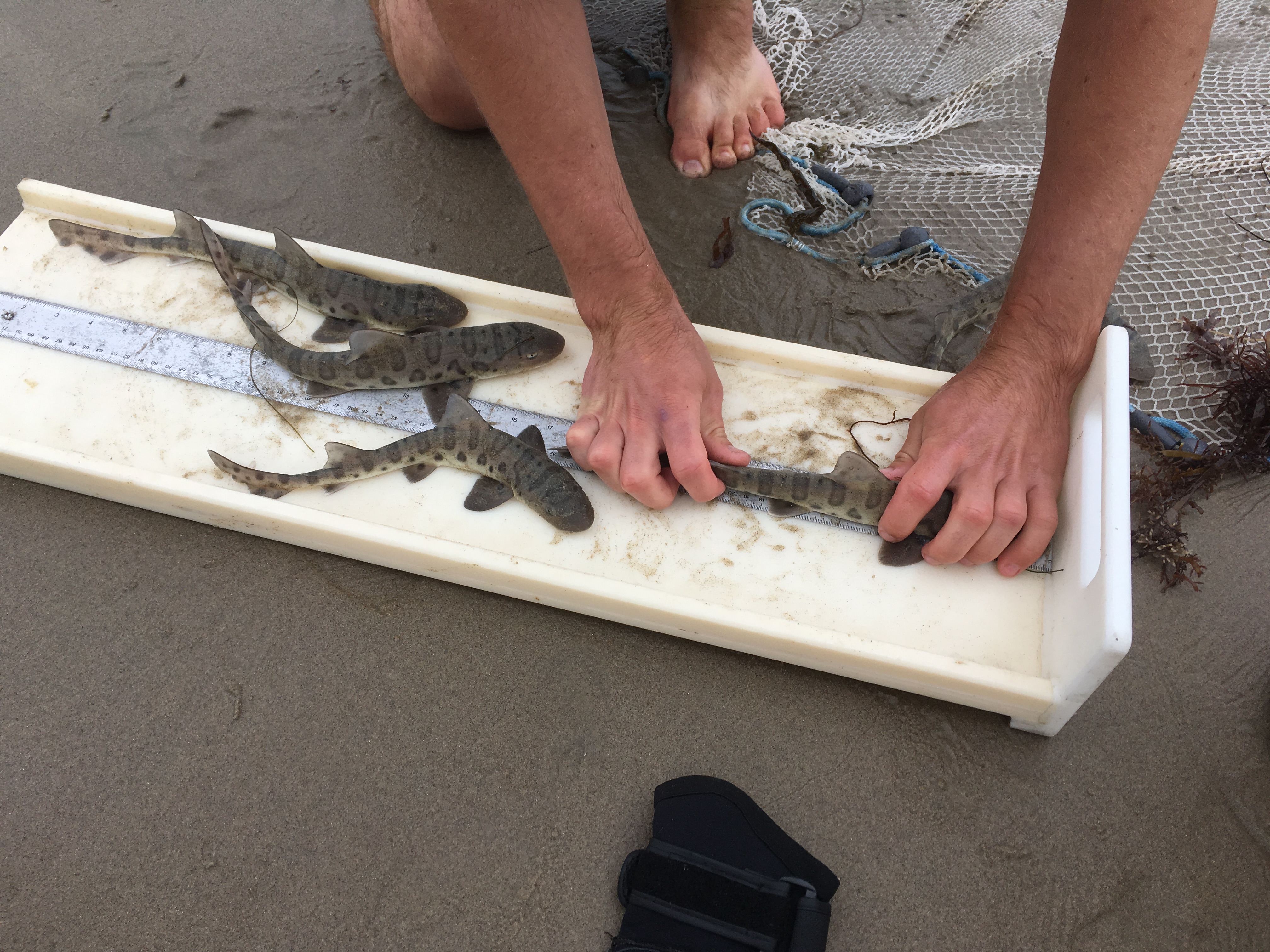