MPA update: A deep dive into the mid-depth rocky reef

Just beyond California’s kelp forests, patches of rock and sandy seafloor stretch from about 100 feet to over 300 feet deep at the edge of the continental shelf in what scientists call the mid-depth rocky reef ecosystem. This zone comprises around 75% of the state’s ocean, but its depth makes it the most mysterious of the near-shore ecosystems. The area is too deep for scuba divers, and to survey effectively requires robotic cameras, remotely operated vehicles (ROVs) or submarine dives.

“It’s much less-explored than other coastal ecosystems,” says Amanda Kahn, an invertebrate ecologist at San Jose State University’s Moss Landing Marine Laboratories. “Yet it makes up a good proportion of the areas that we’ve protected. That’s because there’s a lot of habitat that falls within that range.”

Kahn and a large group of researchers from across the state of California have spent the past few years studying mid-depth rocky reef marine protected areas (MPAs) and nearby sites. The group, led by former California Sea Grant extension director and Moss Landing Marine Laboratories scientist Rick Starr, analyzes historic data — old photos, videos and accounts of habitats from over the years — and uses drop cameras, ROVs, and submarines to monitor the habitat.

The project contributes to a larger effort to study the effects of marine protected areas in California. In a three-year project funded by the Ocean Protection Council, California Sea Grant and the California Department of Fish and Wildlife, scientists across the state are comparing changes in marine populations inside and outside of MPAs.

Although the mid-depth rocky reef ecosystem proves challenging to survey, the researchers already have lots of data to work with.

“A variety of scientists have been observing these deep habitats for different reasons using a range of different tools for more than 30 years,” says Starr. “Our challenge now is to integrate the information from different sources.”

The team also conducts new surveys using specially-designed video lander systems — sets of stereo-cameras, some of which are baited,  that researchers use to study shy species such as giant sea bass — along with ROV dives that capture video transects by flying at predetermined speeds and heights over the seafloor. 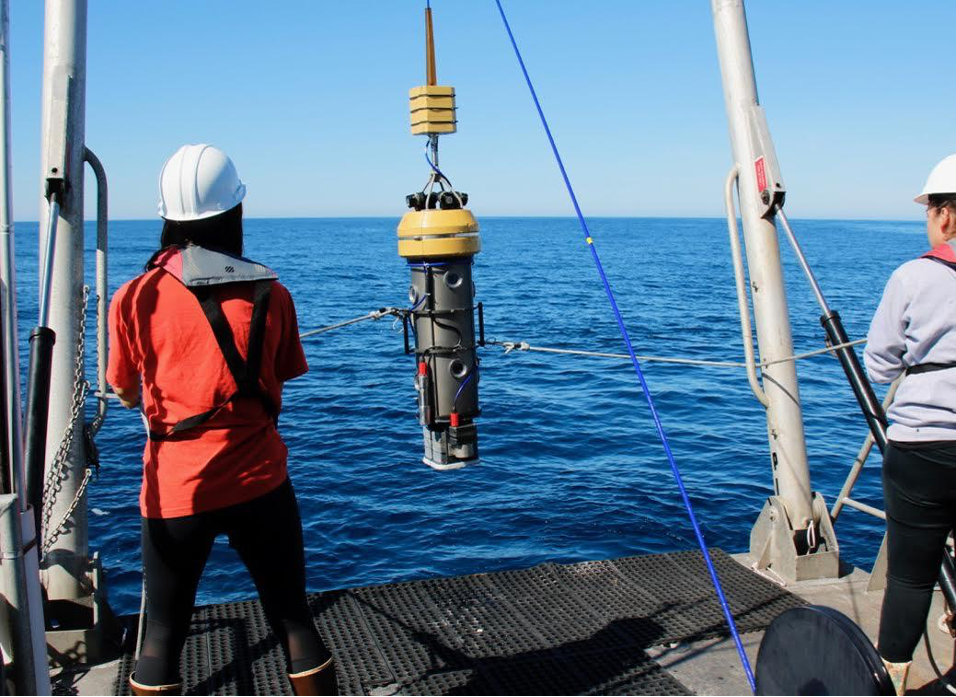 “We’re going back to the exact same areas we took baseline surveys and looking at how they have changed since the MPAs were put into effect,” says Andrew Lauermann, a marine biologist and ROV specialist with Marine Applied Research and Exploration (MARE).

A world of information

Researchers analyze the videos in labs, identifying, sizing and studying the fish and invertebrates that live on and around the seafloor. The scientists try to match and standardize the historic data with what they have collected in the more recent MPA surveys. Moss Landing Marine Laboratories post-doctoral researcher Shelby Ziegler is also developing statistical methods for combining and comparing data from different sources.

“Exploring the dataset is the gift that keeps giving,” says Kahn with a smile. Kahn, two of her graduate students at Moss Landing and Brian Tissot, director of Humboldt State University’s Marine Laboratory, act as the invertebrate experts for the project. Rather than studying how each of the hundreds of species respond to marine protections individually, the team focuses on functional groups — larger groupings of species that occupy similar roles in the ecosystem — such as stationary filter feeders like sponges and anemones.

In addition to studying how the monitored populations and ecosystems are changing, the scientists use the data to create models that help them predict what other areas look like and make recommendations for long-term monitoring.  James Lindholm from CSU Monterey Bay and Jennifer Caselle from UC Santa Barbara are working to integrate old and new data with seafloor habitat maps. 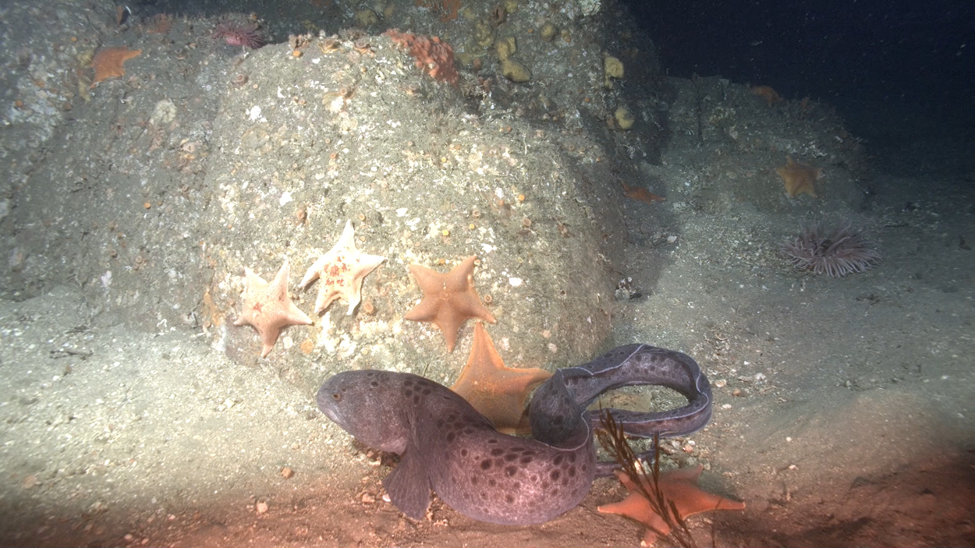 An eel, sea stars, and urchin are visible in this screenshot from video transects in Point Lobos, California. Photograph from Amanda Kahn

“We can’t sample all of the rocky reef habitat in California. It’s a huge area,” says Starr. “So we’re using the sampling we have to model what sorts of fish populations we could expect to find in other sites based on the proportion of rock in those areas.”

In the next few years, this data — along with the data from the broader MPA monitoring efforts — will influence marine policy decisions. “Every protection is imperfect, but every little bit of protection also probably matters,” says Kahn. “This monitoring helps us understand what we have protected and what we might be missing.” 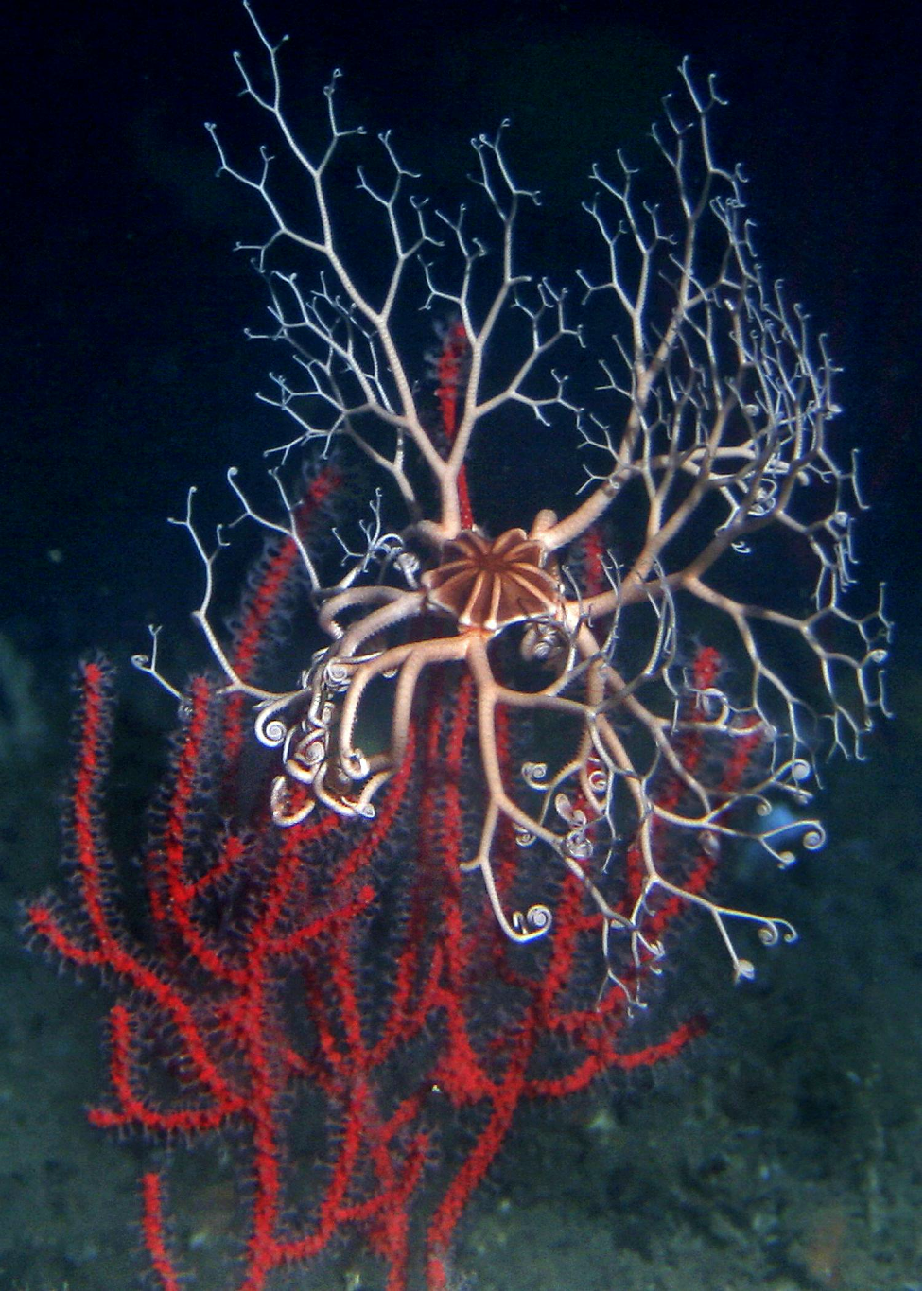 A basket star attached to octocoral in the mid-depth rocky reef. Photograph from Rick StarrStarr says the applications for the data could also stretch beyond state policy. The ecosystem takes up most of California waters and contains the majority of its marine species, “so if we’re really interested in identifying what the effects of climate change will be, we need to survey these deeper areas,” he says.

Many ocean species move throughout habitats, so population changes in these mid-depth rocky reef ecosystems will also directly relate to shifts in shallower, more familiar areas. “Even though they might seem fairly deep and inaccessible to us, these ecosystems are still incredibly connected to the surface,” says Kahn.

MPA monitoring projects have brought together researchers from around the state who work on similar ecosystems. With enough time, funding and communication, different groups could begin to combine datasets and ask cross-ecosystem questions, building an unprecedented understanding of life in the ocean and informing effective policy. 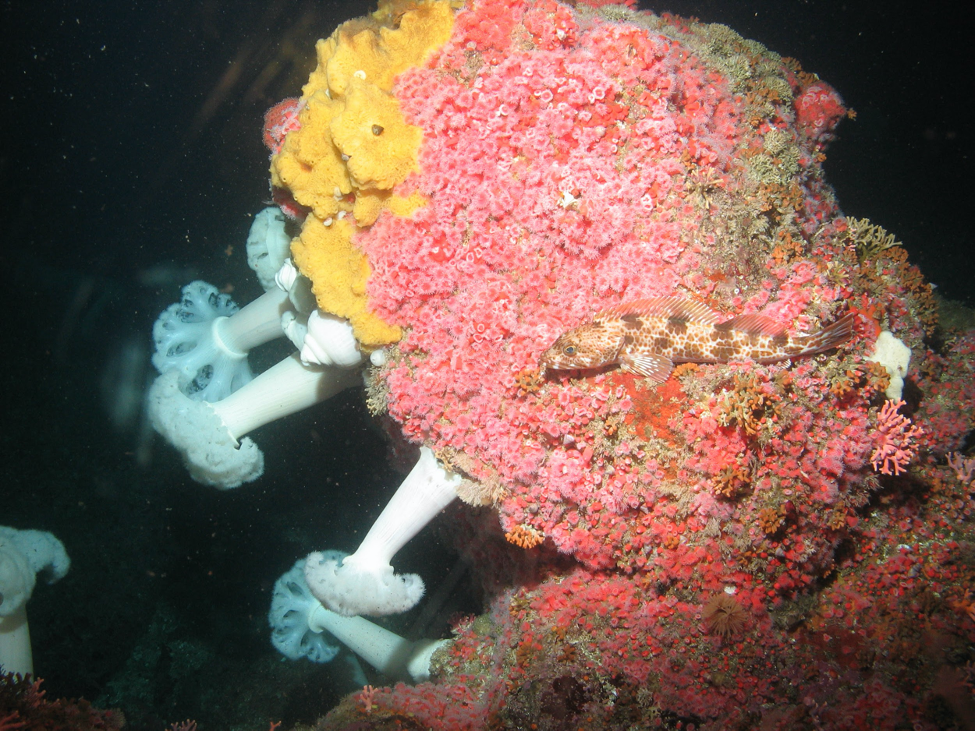 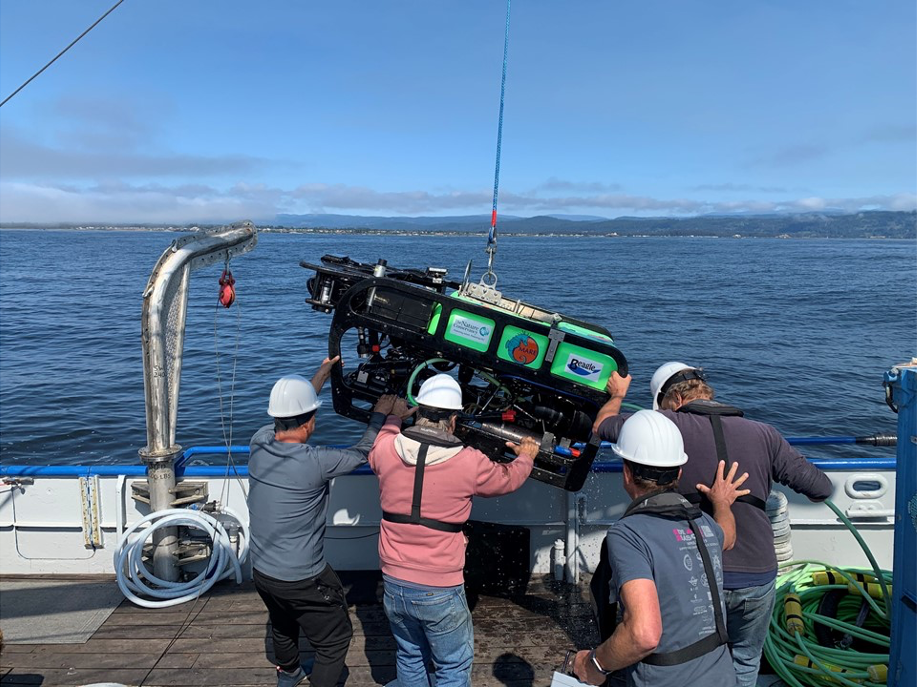 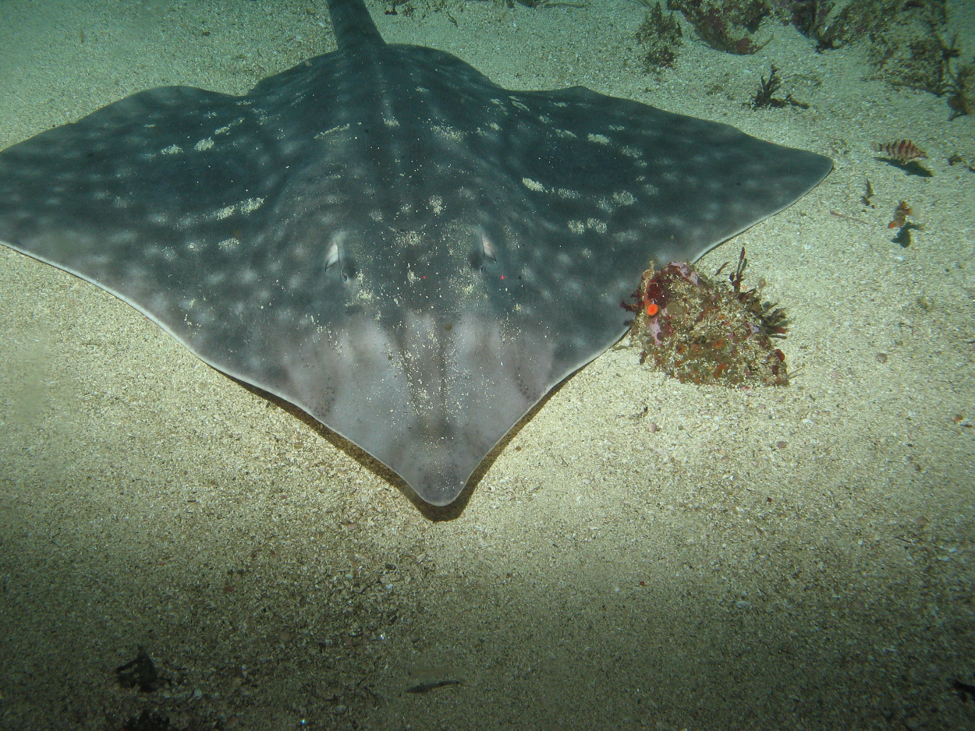 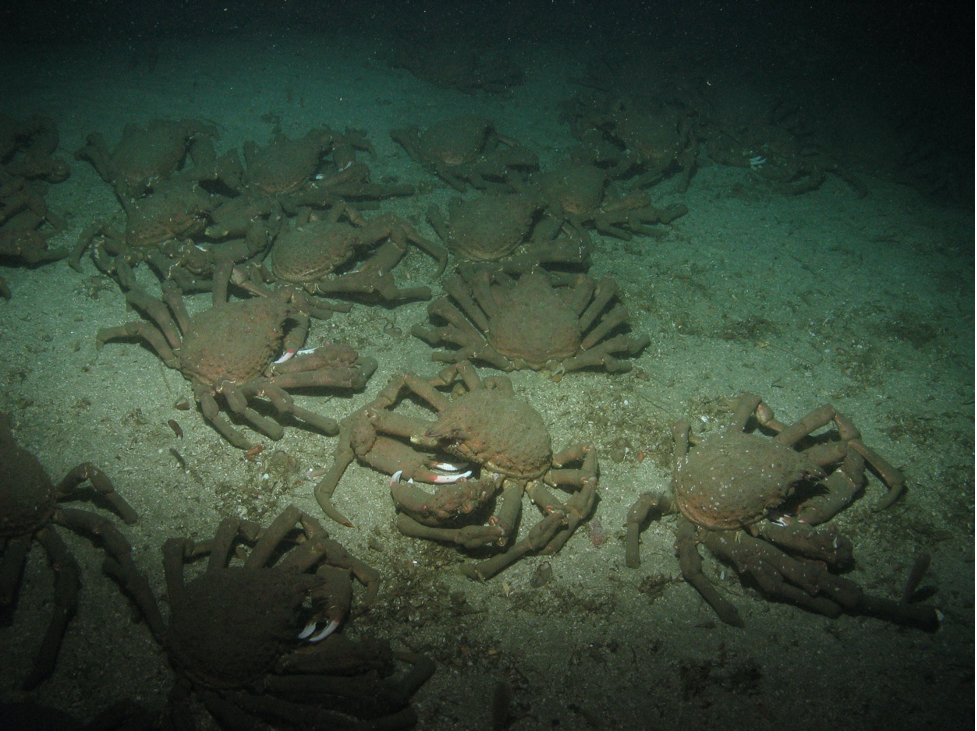