Forecasting of algal blooms improves after record year in 2015

A version of this story originally appeared on UCSC News by Tim Stephens.

Researchers monitoring the unprecedented bloom of toxic algae along the west coast of North America in 2015 found record levels of the algal toxin domoic acid in samples from a wide range of marine organisms. The toxin was also detected for the first time in the muscle tissue or filet of several commercial fish species, where it will stay in the fish and in the food web much longer than if it is just in the intestinal track.

"The duration of the bloom and the intensity of the toxicity were unprecedented, and that led to record levels of the toxin in species such as anchovies, razor clams, and crabs," said ocean scientist Raphael Kudela of UC Santa Cruz. "We also saw the toxin in organisms and parts of organisms where we thought it was not supposed to be, like the filets of fish."

The good news, Kudela said, is that scientists now have a much better understanding of the factors that lead to Pseudo-nitzschia blooms. With support from the California Ocean Protection Council and California Sea Grant, his lab has developed a forecasting model that has performed well at predicting where and when domoic acid will be a problem, providing an early warning to monitoring agencies and seafood consumers.

The forecasts are available through CeNCOOS and draw from a team investigation by UC Santa Cruz scientists, including the influence of river runoff by assistant researcher Clarissa Anderson and groundwater discharge by professor Adina Paytan and student Alanna Lecher.

A combination of warm water and nutrients creates ideal conditions for a toxic bloom of Pseudo-nitzschia, Kudela said. That's a relatively uncommon combination along the west coast, where wind-driven upwelling of cold deep water is a major source of nutrients in coastal ecosystems. When there's no upwelling of cold water, the layer of warm water on the surface tends to be low in nutrients. Pseudo-nitzschia blooms typically occur during the transitional periods in the spring and fall, when upwelling is getting started or winding down and nutrients mix with warm water for a few weeks.

In 2015, however, the usual patterns were disrupted by a warm-water anomaly known as the "warm blob," which first appeared in the North Pacific west of Seattle in late 2013. In 2014, a second warm blob developed off of southern California, and in 2015 they spread into the coastal waters. "We had two pools of warm water hitting the coast in the Pacific Northwest and southern California and merging, so all at once there were warm waters over the whole west coast," Kudela said.

That warm water then interacted with coastal upwelling to create perfect conditions for Pseudo-nitzschia. Normally, the northerly winds that start in the spring blow the warm surface waters offshore, driving the upwelling of cold deep water and creating a regime of cold, nutrient-rich coastal waters that lasts until fall. In 2015, weak upwelling provided periodic injections of nutrients, but every time the upwelling got started the warm blob pushed back onto the coast.

The result was a record-breaking toxic algae bloom that started in April and lasted into early October. The size of the bloom was also unprecedented, extending from Santa Barbara to Alaska. Even in December, water samples were still occasionally showing up with domoic acid, Kudela said. "We think it's just moving offshore, and each time conditions are right it comes back in to the coast," he said. "Once a series of big winter storms comes through, that's when we'll see it go away until the following spring."

Now the big question is what the impact of El Niño will be in 2016, because El Niño also brings warm water conditions that can favor toxic algae blooms. Most of the warm water along the California coast in 2015 was from the warm blob, although El Niño probably began contributing to it later in the summer. Historically, El Niño periods have been associated with larger than normal blooms of Pseudo-nitzschia, Kudela said.

"The predictions are for this El Niño to be as strong as the one in 1997-98, when the warm water lasted through 1998. So we could be looking at a big bloom again next year," he said. 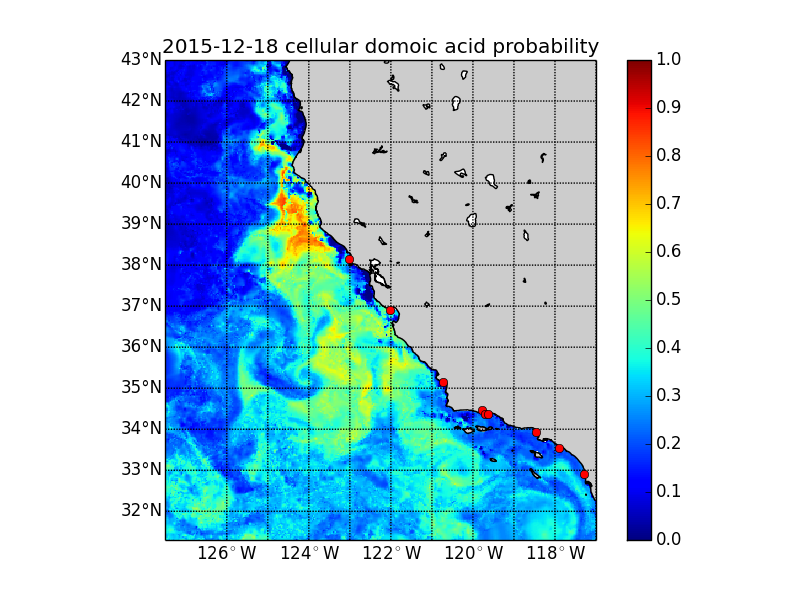