Farming the sea, in America

America imports about 90 percent of the seafood its residents consume annually, and more than half of this fish and shellfish is produced on farms overseas.

According to NOAA Fisheries, this translated into Americans spending about $16.6 billion on imported seafood in 2011.

“A compelling case can be made for growing more seafood in the United States,” states NOAA FishWatch. “Half of what we import is from aquaculture, yet we produce so little at home, only 5 percent of the U.S. seafood supply is from domestic freshwater and marine aquaculture. Driven by imports, the U.S. seafood trade deficit has grown to over $10.4 billion annually.”

California Sea Grant supports research that will help the nation develop an environmentally responsible domestic aquaculture industry. The projects we support view the aquaculture industry through many different lenses, from evaluating the social constraints of fish farming to using genomics to breed a faster growing, higher-yield Pacific oyster.

Yet another project is using modeling approaches to assess pros and cons of various potential offshore aquaculture scenarios. The results may help with spatial planning in an ever increasingly crowded offshore marine environment.

Below is a description of some of our ongoing aquaculture projects.

This project seeks to identify and analyze the social obstacles (“constraints”) to developing a domestic offshore aquaculture industry. The hope is that this type of information might lead to solutions that could help move the industry forward. Objectives include: (1) identifying the range of social, economic, environmental, cultural and ocean space-use challenges observed by participants in the emerging offshore aquaculture industry; (2) validate this information with people “directly involved in, formally overseeing, indirectly observing, and potentially working and recreating in areas adjacent to the industry,” and (3) identify options for mitigating or precluding the range of constraints and challenges. Well-tested social science research methods will be employed, including archival research, “purposive social network-based sampling,” in-depth interviews and follow-up interviews, participatory mapping, and in-depth focus group research. The team has, to date, completed its first phase of work in Hawaii, California and along the U.S. East Coast and is in the process of preparing a report on the “human context in which the offshore aquaculture industry is situated.” Once this is done, their investigations will focus on a second round of interviews, focus groups and data analyzes that they hope will identify strategies  for resolving concerns, constraints and objections to the industry’s growth. Findings will assist formal policy deliberations on the future of the industry. 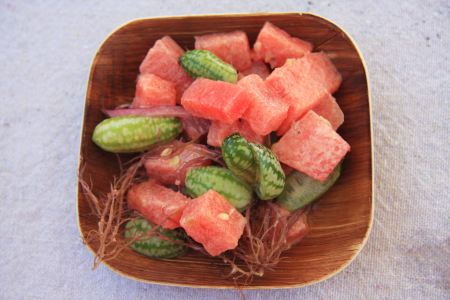 The state of California is in the process of establishing a management framework for permitting and regulating open-ocean aquaculture. To assist in the planning process, this project seeks to model and evaluate the industry’s economic and environmental tradeoffs. The emphasis of the work, to date, has been to decide on how to focus the modeling effort on specific species and culturing methods that together might broadly represent the full range of likely farming operations. After much research, the team has decided to model and evaluate these three scenarios: 1) finfish in net pen cages, based on white seabass; 2) shellfish on longlines, based on Mediterranean mussels, and 3) kelp on longlines, based on Laminaria. The model will examine the effects of these on: 1) the California halibut fishery, 2) water quality and the bottom environment and 3) visual impact from operations that may be visible from the coast. In the coming months, the team will be running the finfish scenario in Aquamodel, a proprietary software model developed by colleagues at USC, and will be exploring how to model disease dynamics so as to be able to evaluate the risk of disease transmission to wild fish. Other modeling work will looks at patterns of larval dispersal and connectivity, and possibly pollutant dispersal. The project is based on a similar one, led by the UC Santa Barbara’s Sustainable Fisheries Group, in which the impacts of offshore energy were analyzed. The hoped for outcome of this project, scientists say, is to significantly reduce conflict over and impacts from fish farming and thereby increase its value and compatibility with other ocean uses. 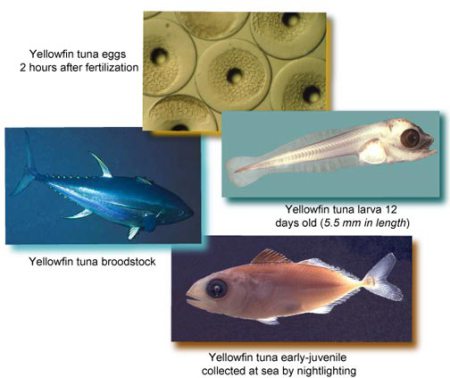 Rearing fish during their larval stage is often the most difficult part of developing a new species for culture; however, for yellowfin tuna, this common difficulty is further complicated by the absence of a domestic population of breeding fish. Instead of setting up breeding tanks locally, which is expensive and logistically complex, researchers have been airfreighting tuna eggs and larvae from the Inter-American Tropical Tuna Commission’s facility at the Achotines Laboratory in Panama (one of the few research facilities in the world designed specifically to study the early-life history of tropical tunas) to their aquaculture facility at Hubbs-SeaWorld Research Institute in San Diego. The survivorship of these animals, though, has been so low that it has been basically impossible to carry out the necessary research on their early life history requirements (e.g., nutritional requirements). The first main goal of this project is to identify what is causing low survivorship among airfreighted fish and to fix the sources of harm, if feasible. Preliminary experiments during the project’s first year suggest that packing larvae for air-freight may itself be a problem, as low survivorship was observed in both larvae airfreighted to San Diego and in controls kept on the ground in Panama. In correspondence with scientists in August of 2013, Sea Grant was informed that all aspects of the project were delayed for the last 14 months because the captive tuna stopped spawning. According to the research team in Panama, this was due largely to a smaller-than-normal number of breeding adults and an inability to replenish the brood stock with new fish, because of unusually poor fishing conditions. The scientists report that fishing has improved recently, and the population now stands at 24 with a target of 40 adults. They plan to resume their research in 2014. 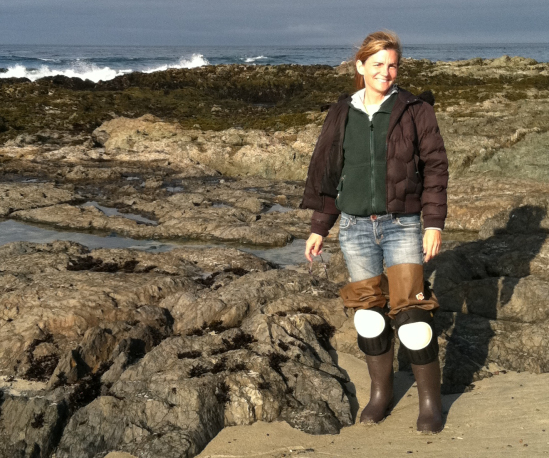 Withering syndrome is a lethal abalone wasting disease that has decimated both farmed and remnant wild abalone populations. Triggered by El Nino events or warmer-than-normal coastal waters, the highly contagious water-borne disease is now a global problem that continues to spread, most recently to water off Japan. This project seeks to identify and characterize a variant of the bacteria (technically a rickettsia-like organism, or RLO) that causes the disease. In the project’s first year, the scientists showed that the RLO variant is the original pathogen, infected with a phage hyperparasite. Intriguingly, the parasite seems to reduce the disease’s virulence. In other words, when the bacteria is infected with the phage, abalone that harbor the phage-infected bacteria are less likely to become diseased. (Pathogens get pathogens, too.) In the project’s second year, researchers found two possible virus sequences, one similar to a virus found in abalone in Asia, the other a baculovirus. Based on these findings, they selected PCR primers and attempted to amplify samples containing phage DNA; however, no amplification was observed, and they have since sequenced new samples and are using bioinformatics to identify the bacteriophage infecting the RLO. Testing in abalone, to date, suggests that the phage is present in some mainland but not island locales. In 2013, scientists validated a quantitative real-time PCR assay that will allow scientists to document the distribution of the phage-infected RLO in both wild and farmed populations. In the project’s field component, researchers continue to monitor endangered black abalone populations and report a dramatic increase in the number of animals counted at nine survey sites along the periphery of San Nicolas Island—from 195 in 2001 (a record low) to 1,430 in 2012. Five of the state’s eight abalone species are categorized as “species of concern” or are protected by the Endangered Species Act. Results from this project are being shared with NOAA Fisheries, which is developing recovery plans for the abalone species, and with abalone farmers. The Abalone Farm in Central California, the state’s largest abalone producer, is a collaborator on the project. 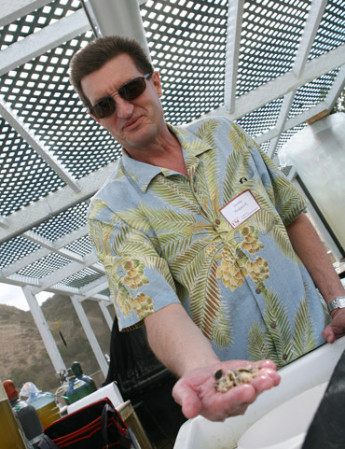 This project seeks to develop tools and knowledge for developing a high-yield Pacific oyster for commercial culture. In work to date, scientists have been crossing oyster lines and studying how different oyster genotypes affect various physiological, metabolic and proteomic processes. The basic premise is that genes are responsible for hybrid vigor (high growth rates) and that this superior growth will be reflected in other biological processes, such as protein metabolism. A main goal of this project is to identify, from the millions of possibilities, genes, proteins or metabolites that might serve as biomarkers for detecting desired characteristics during an oyster’s larval stage. Such a tool would enable researchers to screen oyster genotypes rapidly, without having to wait for shellfish to mature to adult size to show their traits. In parallel with laboratory experiments, California Sea Grant Extension has led and now completed field tests of an experimental “double cross hybrid” Pacific oyster seed produced by Taylor Shellfish Farms, the project’s industry collaborator. This experimental seed was raised alongside seed, selectively bred for growth and high survivorship, at Hog Island Oyster Company in Tomales Bay, Grassy Bar Oyster Company in Morro Bay and Carlsbad Aquafarm in northern San Diego County. The double-hybrid seed was shown to increase yields by 2 percent, 6 percent and 8 percent at the three farms. Oyster culture is an $84-million-a-year industry on the West Coast, and the increased yields observed with the experimental seed could add approximately $21 million to the industry’s value over a decade. Results from this project to date have convinced Taylor Shellfish Farms to increase its investment in an in-house commercial cross-breeding program.