An invasive seaweed's secrets to success

Researchers were concerned when they found the large, brown seaweed Sargassum horneri in Long Beach Harbor in 2003. The alga (commonly referred to as “devil weed”) is native to Japan and Korea but had traveled across the Pacific—likely by way of shipping containers—and firmly established itself off the coast of Southern California. After its discovery in 2003, Sargassum horneri spread north to the Channel Islands and south to Baja California in Mexico within a few years. Large and fast-growing, it seemed to completely take over some areas. “It’s like swimming through a jungle of the stuff,” says UC Santa Barbara marine ecologist Dan Reed. “That’s all you see.” 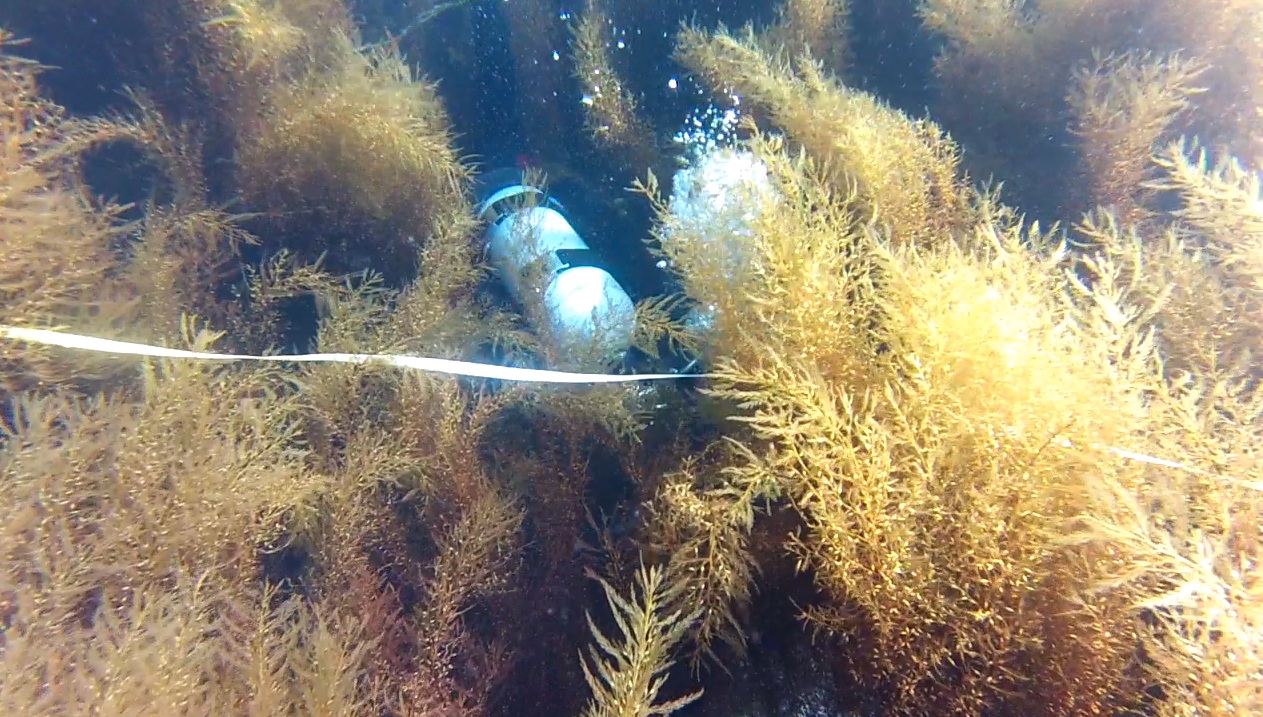 A diver swimming through the "jungle" of Sargassum horneri.

Some invasive species have the potential to quickly overrun and destroy entire ecosystems, and California’s giant kelp forests were already facing other threats. To understand the potential impact of the seaweed, biologist Lindsay Marks, then a PhD student with Reed and Sally Holbrook at UCSB, designed and carried out a series of experiments for her dissertation aimed at understanding how the non-native species spreads and how it affects local marine life. 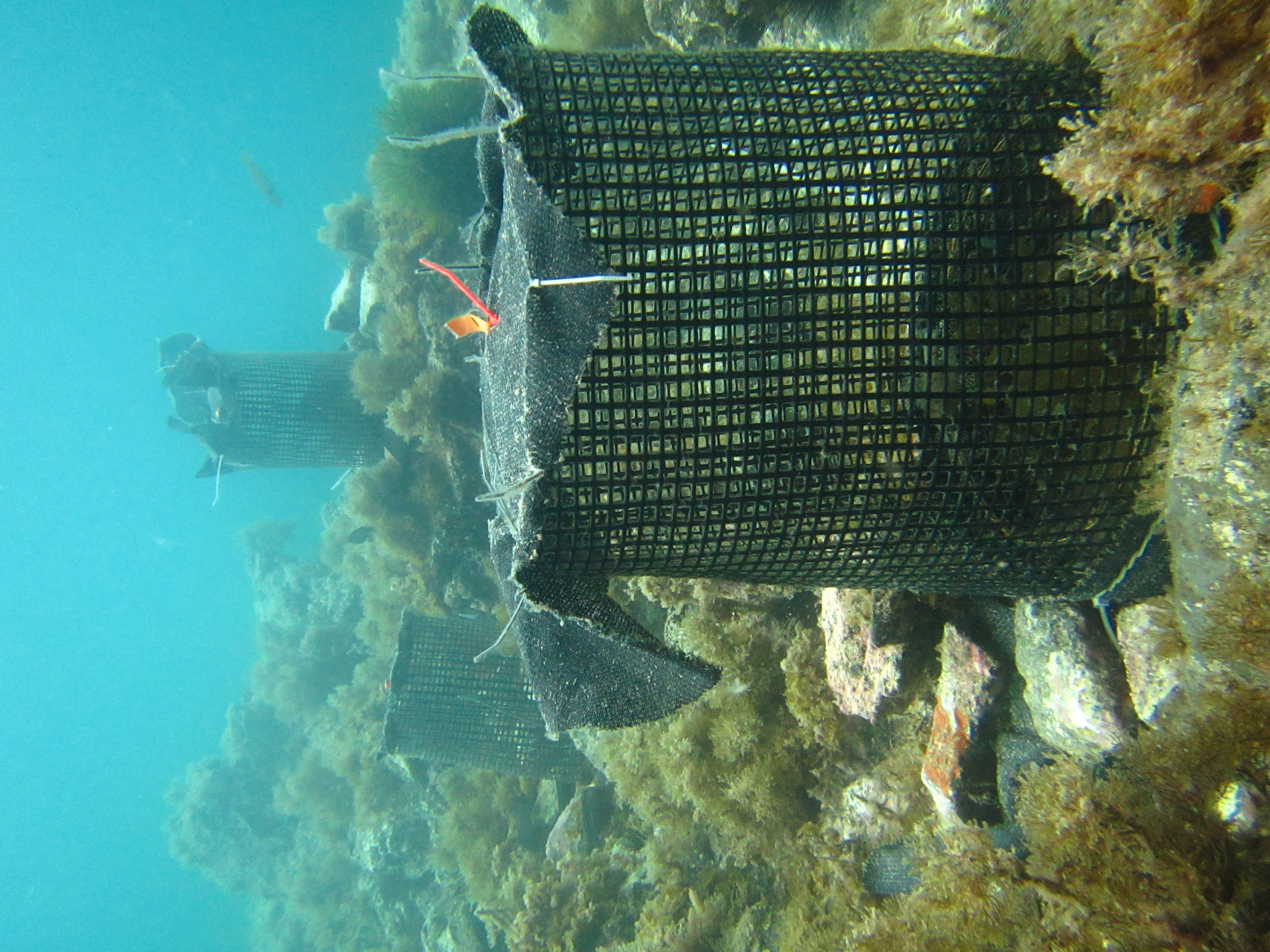 Caged algae arrays on a rocky reefWorking entirely underwater at Santa Catalina Island, Marks created plots where she tested whether removing the invasive Sargassum horneri would allow native species to increase in abundance. If the invasive seaweed uses similar resources to native seaweeds and competes directly with them, she expected to see the native species thrive and increase with the removal of Sargassum horneri. Marks also compared the time of year that the different species are most active and where on the reef they grow. She, Reed and Holbrook answered some of those questions in a 2014-2016 California Sea Grant-funded project and published some of their results in January in Diversity. What they found surprised them.

Why is Sargassum horneri so successful?

While some invasive species spread because of their ability to out-compete native species for space or resources, others spread because they don’t need to compete in the first place. Their success depends instead on the ability to use previously unclaimed parts of the ecosystem. Marks and her team found that over four years, the amount of native algae remained similar in plots with Sargassum and in plots where Sargassum was continuously removed. (Giant kelp disappeared from the study site during the first year of the project and has not yet made a comeback in the area, so the native species studied were smaller algae that grow close to the bottom.) The invasive seaweed also grows at a different time of year than most native seaweeds and thrives at a middle depth, where many native species are less common. The native algae seemed to prefer the shallower and deeper depths. 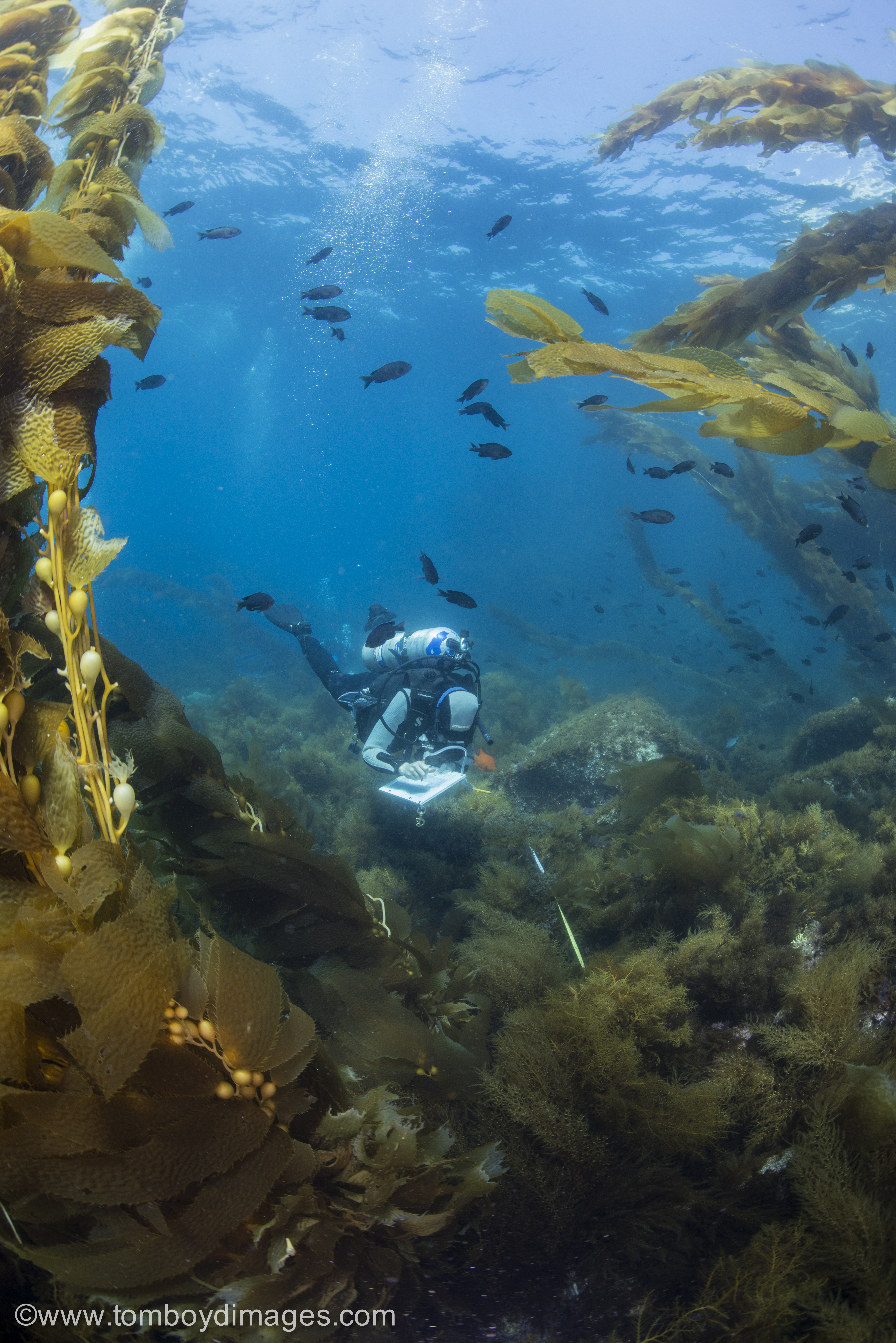 A diver collects data on a rocky reef -photo credits Tom BoydThese results suggested that Sargassum horneri takes advantage of available resources in the ecosystem rather than outcompete native species. It wasn’t until 2017, when a year of warm water allowed the invasive alga to grow particularly thick and block sunlight, that the researchers saw an impact on native species. “I was a bit surprised that we really didn’t detect any sort of competitive impact of the Sargassum on the native algae until that 2017 spring period,” says Marks.

Another reason invasive species often find success in new habitats is a lack of natural predators. To test whether local algal grazers—urchins and sea snails—have an appetite for Sargassum horneri, the researchers placed native algae and Sargassum near the grazers and in cages excluding the animals as a control. The urchins and snails preferred the native algae and avoided invasive Sargassum horneri, revealing another key to the invader’s success.

Can we eradicate it or stop its spread?

As part of the research project, California Sea Grant Extension Specialist and UC Santa Barbara research scientist Carolynn Culver helped create outreach materials to map the spread and inform the public about the issue. “We developed a website with many outreach materials, including data sheets, an online mapping and sightings reporting page and posters for harbors about how to minimize the spread when boating, diving or fishing,” she says. 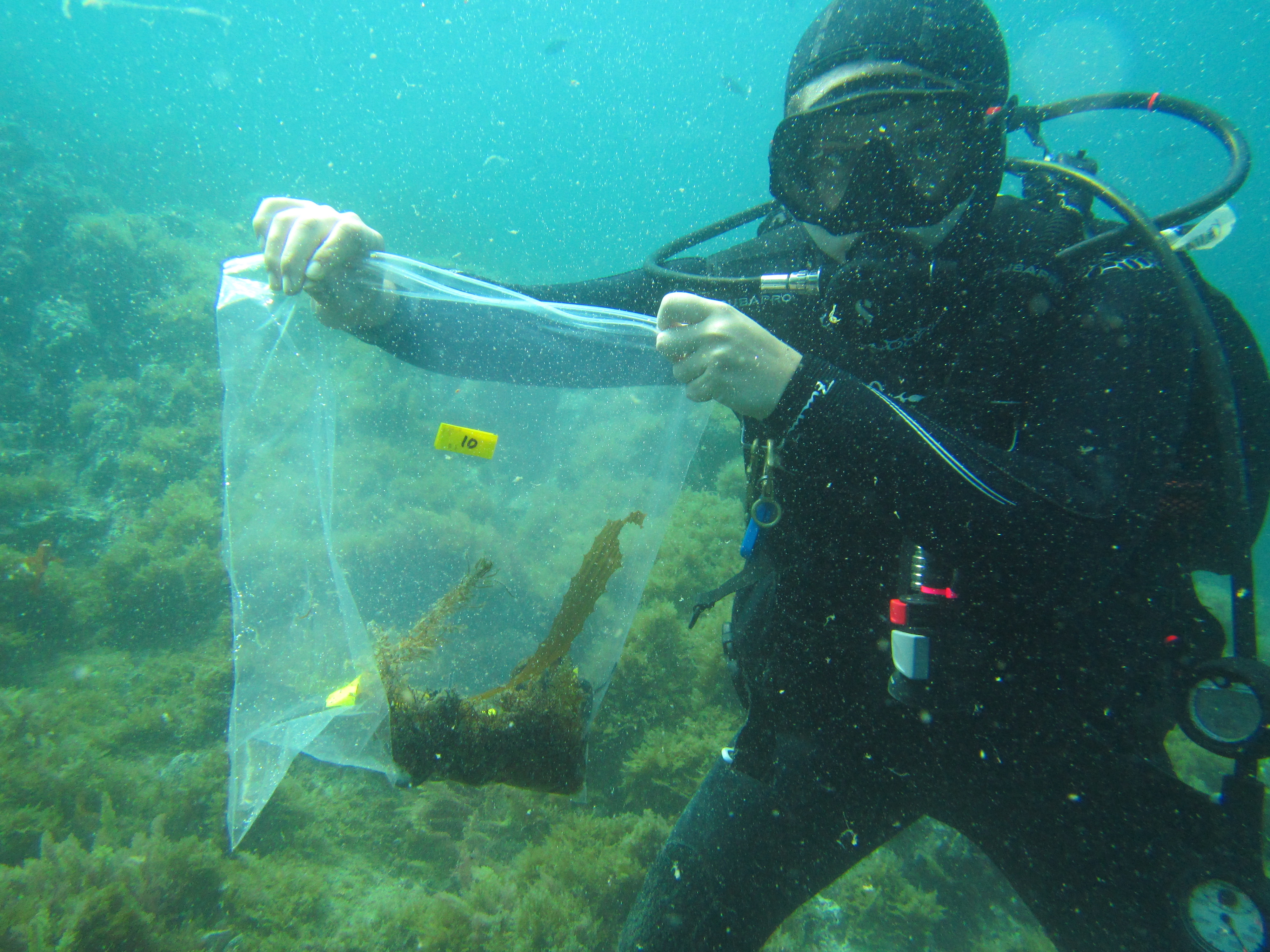 Collecting algae samples off the coast of Santa Catalina IslandSargassum horneri’s reliance on underutilized resources rather than competitive ability might be better for native algae, but it doesn’t mean the invader will be easier to manage. Marks and colleagues explained that once established, the species is almost impossible to remove entirely. “Sargassum is already so widespread in our region that any management efforts really just need to focus on mitigation,” says Marks. Knowing more about its reproduction and peak season can help. “If you are disturbing this alga during the time of year when it’s reproductive, you might actually be unintentionally spreading it farther,” says Marks. If pieces of it get pulled off the reef and escape, they can float along ocean currents to new sites.

“You want Mother Nature working with you, not against you,” says Culver. In addition to paying careful attention to the reproductive season and spread of the invader, Culver says removing species takes planning for what will replace it. “It is important to realize that doing ‘some’ things can be worse than doing nothing. But with some careful thought and patience—and maybe a little luck—we often can do more to minimize impacts of aquatic invasive species.” 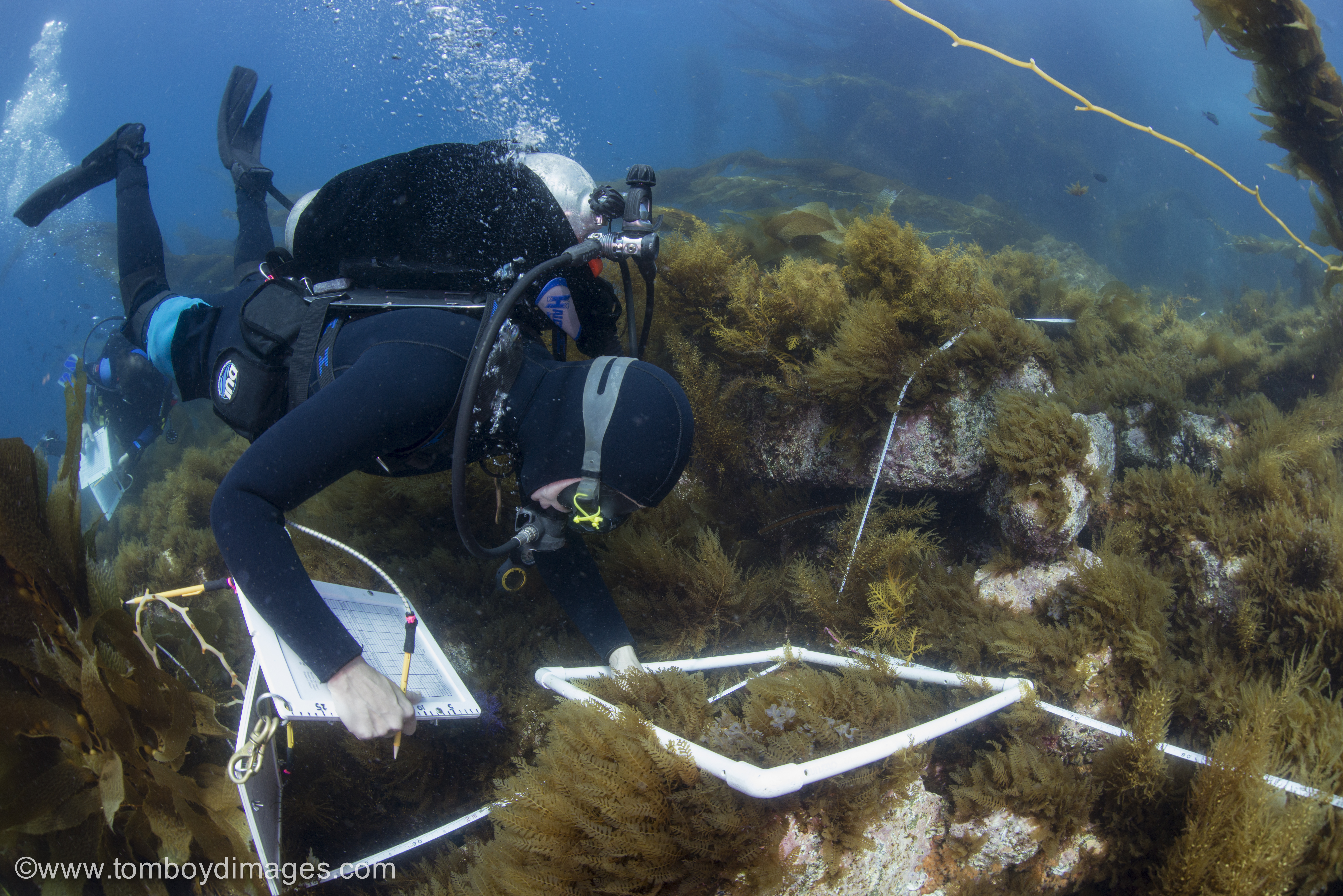 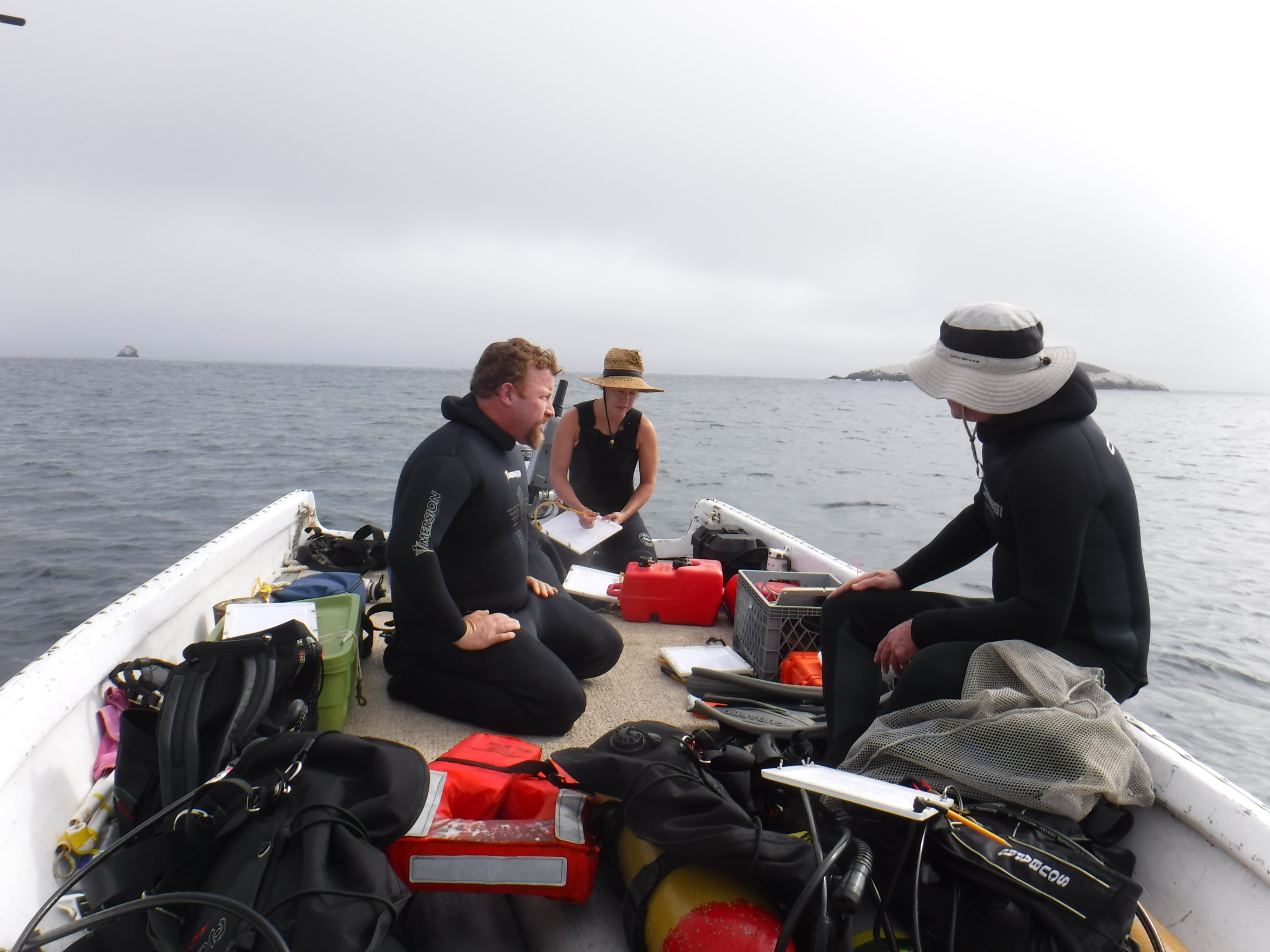 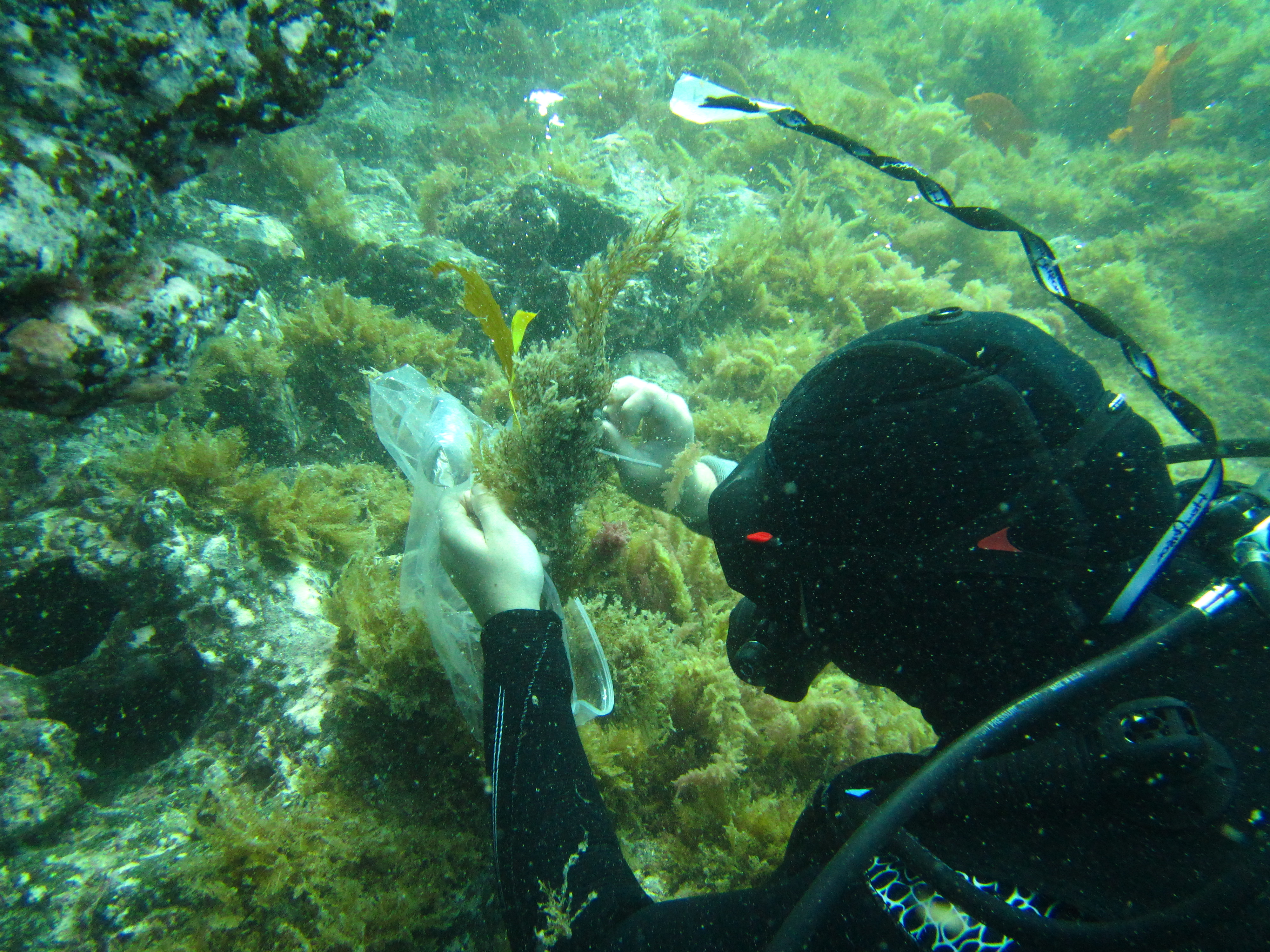 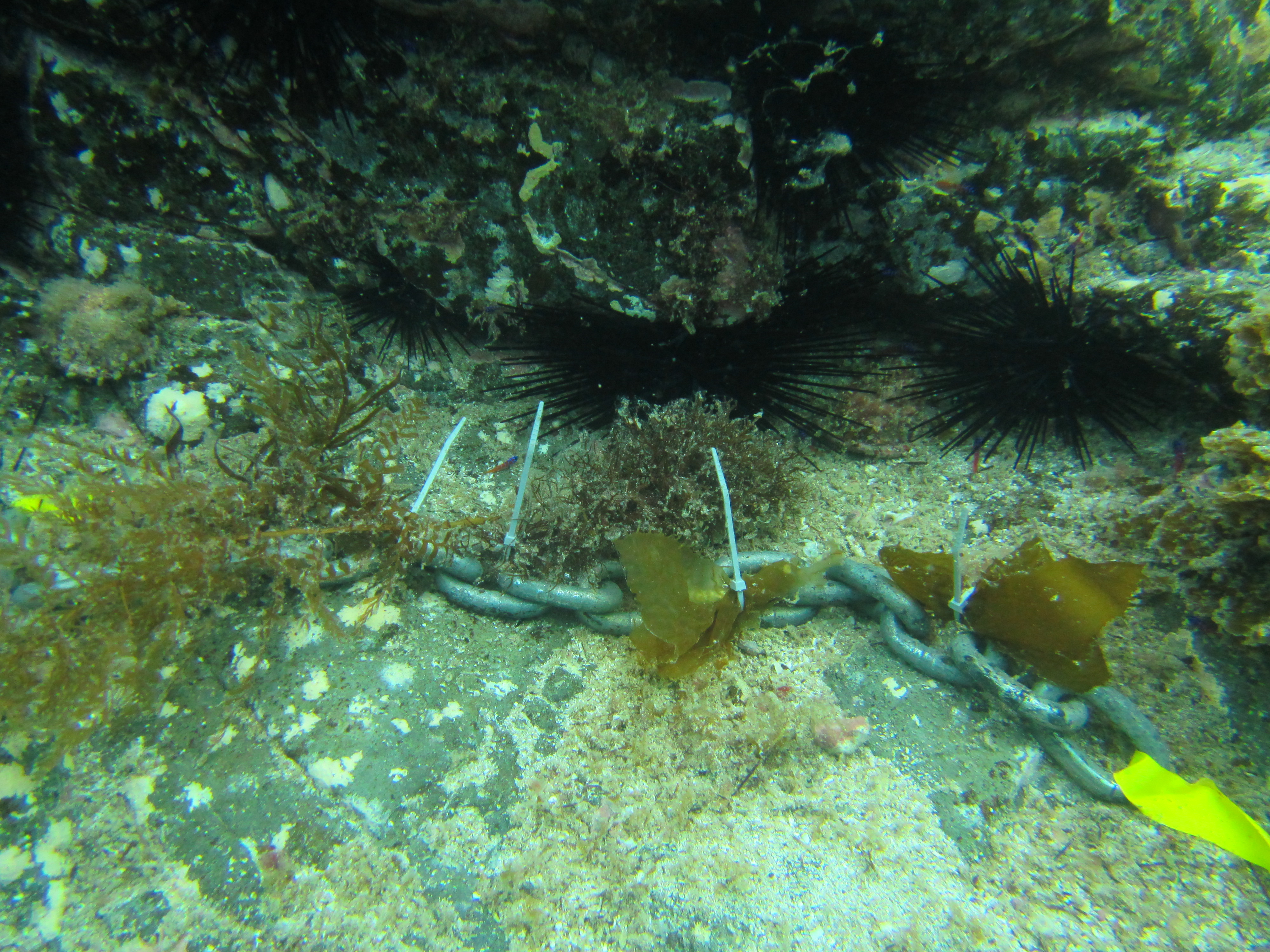