As I have continued my work with Caltrans this year, I wanted to supplement my current experiences by assisting with programs that would get me out in the field.

This desire led me to participating in the Sea Grant Extension Program with the Russian River Salmon and Steelhead Monitoring Program in Windsor, California. California Sea Grant’s Russian River Salmon and Steelhead Monitoring Program conducts broad-scale monitoring and specialized research of native salmon and steelhead at all life stages, and works closely with partners to support salmonid recovery efforts throughout the Russian River basin. Over five days in June and July, I have been able to assist with a variety of field surveys. 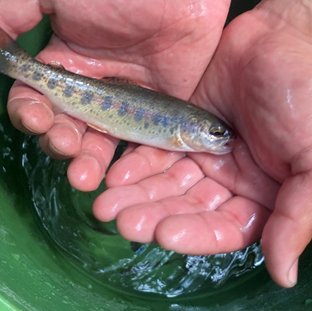 Briefly holding a juvenile steelhead from one of the collection buckets.In June, I helped with fish rescue and wet/dry stream mapping surveys. Fish rescues consist of moving endangered coho salmon from pools that are drying into stream reaches that are likely to stay wet through the summer. They are definitely not a long-term solution but are used as a triage measure during exceptional drought conditions like those currently plaguing the region. The fish rescue day was in Green Valley Creek, which is an important coho salmon refuge stream. We met other folks from the Department of Fish and Wildlife who led the process and, in the end, we captured approximately 300 salmonids that were transferred to a hatchery or other stream where they would have a higher chance of survival through the drought. 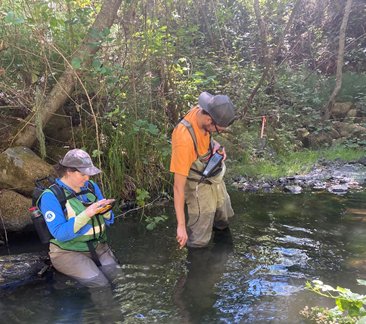 Collecting dissolved oxygen and temperature measurements in a creek on my second day of assisting the program.

On the second day, I went with two others to help with a wet/dry mapping survey. The survey included walking a section of stream and using a hand-held GPS device to draw a line that indicated dry or wet conditions. We also measured dissolved oxygen levels and water temperature. This data is used to determine where the streams are habitable for fish through the dry summer months, and is compared to fish distribution data to estimate the impact of stream drying on rearing salmon and steelhead. It was the first time that I was able to collect original data in the field and see it get uploaded to a computer, which was exciting, as I typically only work with data in the office.

In July, I completed another wet/dry habitat survey in Peña and Pechaco creeks and went on a snorkel survey in Mill Creek. The wetted habitat survey was a 10-hour day walking the creeks in remote areas through dry creek bed, downed trees, and waist-deep water with pristine or fire-scorched riverbanks from the 2020 Walbridge Fire. On my final day with the program we conducted a successful snorkel survey to help document the distribution and relative abundance of juvenile salmon and steelhead. I was able to get into the water and see all the little fish swimming in their element - a wonderful way to have been able to finish my time with the program. 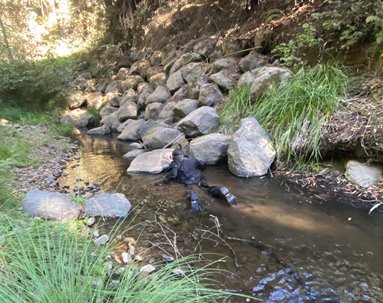 Participating in a snorkel survey to count salmonids.

We collected as much data as possible until encountering a tree trimming operation that was removing trees in an effort by local jurisdictions to reduce fuel sources for future fires. Not only did the operation drastically limit data collection, the data that we did collect was now inconsistent to previous years and the control data taken the day before. Additionally, the crews did not appear to be conscious of the ecological damage that their work was doing to the stream at the base. In certain areas, the removal of trees was causing slides of debris into the creek. I was experiencing the creation of several feedback loops that only time would showcase. 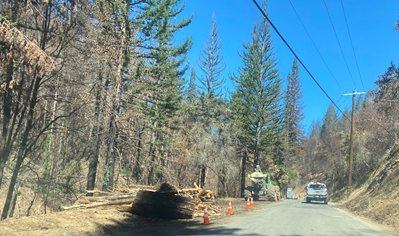 Maintenance crews work to remove trees in an effort to reduce fuel sources for future fires.

The work to support salmonids in this area is far from over and raises questions of how to ensure that both environmental and economic resources are preserved. This balance requires a concerted effort from each of the many organizations working towards salmon recovery, as well as engagement by private landowners and the entire watershed community. Different entities sometimes have competing priorities, but I am glad to know that there is a program like this to help protect such an important keystone species, on which the ecosystem health depends.

Through this experience, I gained an understanding of the vulnerability of science-based programs, which are often highly impacted by funding decisions. It is humble and rewarding work that is at the mercy of budget cuts and just like art, music and other creative advocacy work, it is prone to budgetary impacts. With that said, I was very happy to hear that Sea Grant will be offering funding to pay incoming interns in the fall. As the daughter of Mexican immigrants that has lived in lower socioeconomic neighborhoods the majority of my life, I know that unpaid internships are an impediment to many of my peers.

Overall, nature is resilient and even amidst dire circumstances I believe there is still hope and a benefit to all the work that programs like this are conducting.