Jess Morten: Solving a Whale of a Problem

Back in 2008 when I was 22 and newly-armed with a bachelor’s degree, I was fortunate enough to land a dream entry-level research internship after graduation. I arrived on the scene at a lean-staffed marine research organization called the Whale Center of New England in Gloucester, Massachusetts. I was unsure of what experience might await me, but remained open-minded and ready to learn.

At the time, on both coasts of the U.S., an emerging and poorly understood problem was gaining increasing attention in the somewhat small world of whale conservation and research. The naming of this threat was variable – "ship strikes", "whale strikes", "ship collisions" – but the issue at hand was not. All around the globe, ports reported baleen whales strewn across the bows of large vessels, and people were starting to focus on what could be done to prevent this.

That year, I spent my days on large whale watching boats and small inflatable vessels collecting behavioral and population data on North Atlantic right whales, a critically endangered species of baleen whale that resides off of the east coast of the United States. Ship strikes have been pointed to as responsible for more right whale (three species of large baleen whales) deaths than any other single human impact and the goal of my organization’s research trips was to survey a suspected critical habitat for this population. This information would be included in a system of Dynamic Management Areas, in which slow speed zones for shipping traffic would be implemented as a mitigation tactic.

Fast forward 8 (yikes!) years through a handful of more field research positions and two years of graduate school to the present day as a California Sea Grant Fellow at NOAA Channel Islands National Marine Sanctuary’s office, and I still spend my days focused on finding a solution to the same pervasive issue – ship strikes.

On the West coast, the population of most concern is endangered blue whales—a population that most stock assessments suggest numbers around 2000 individuals. I work alongside other members of the Resource Protection team to implement a program that incentivizes vessels in the Santa Barbara region to slow to 12 knots or less in these known whale aggregation areas. 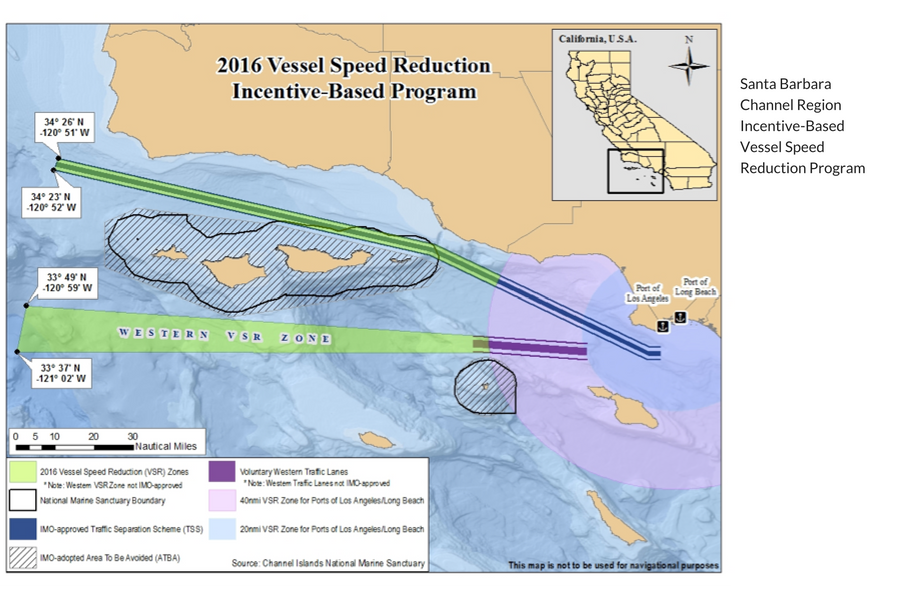 The Santa Barbara Channel Region Incentive-Based Vessel Speed Reduction (VSR) Program is an unconventional but effective program that works alongside the shipping industry to improve local air quality (slower ships also means fewer harmful air emissions) and reduce the risk of ship strikes on whales. It’s considered to be a somewhat unconventional approach because rather than mandate the shipping industry to comply with regulations, this voluntary, incentive-based VSR program works with the shipping lines to achieve air quality and conservation benefits, and because these methods are non-regulatory (meaning it doesn’t have to wait for the policy world to make it happen), it can achieve those benefits right away.

The framework is pretty simple: Use incentives (read: payments and/or positive public relations campaigns) to motivate the shipping industry to slow their vessels’ transits through the region to 12 knots or less.

The program is underway through mid-November 2016, but immediate benefits accrued from this effort are already quantifiable and the results have been really exciting so far, with 65 regional transits from 10 shipping lines enrolled and over 75% compliance reported for our first 20 enrolled transits. The program has also offered us insight into the willingness of these influential companies to participate in these types of conservation efforts, highlighting their vessels as an untapped platform for data collection in remote locations where few research boats can afford to transect.

There is much to be discouraged about in the field of conservation and environmental policy, and while many years have passed since my first right whale survey and no silver bullet solution has (yet) been identified, I am hopeful about the potential I see. Achieving conservation benefits through voluntary efforts that partner alongside industry to achieve mutually beneficial goals may be unconventional, but they are effective, and I am excited to see what can be accomplished on both coasts through these methods. 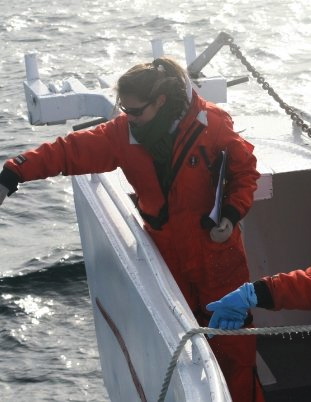