California’s coastline contains a unique mosaic of natural spaces, with contemporary
iconography often highlighting the sandy beaches and surf breaks of the southern bight, the dramatic seaside bluffs of the central coast, and the towering coastal evergreens of the wild north. However, scattered among these world-renowned scenes lies an often-overlooked network of estuaries, marshes, and coastal wetlands. Ranging from unassuming pocket beach lagoons to the sprawling San Francisco Estuary (the largest estuary on the west coast of North America!), these systems are essential for a healthy and natural California coast. 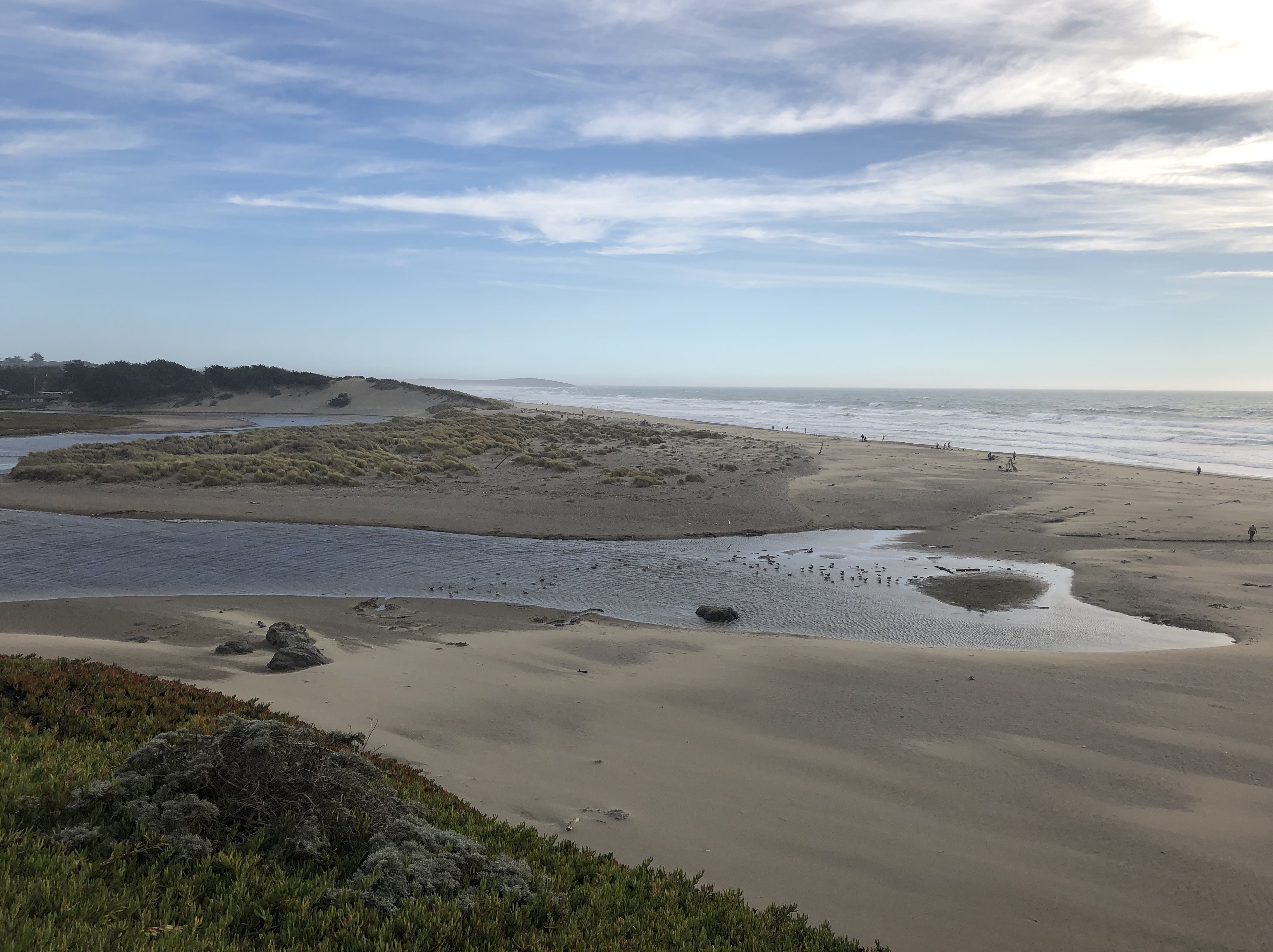 Estuaries, generally defined as transition areas where the ocean’s saltwater mixes with riverine freshwater, provide a range of unique ecosystem services. Healthy estuaries offer refuge, nursery, and foraging habitat for fish, migratory and resident birds, invertebrates, and marine mammals like the charismatic southern sea otter. An estuary also functions as a natural water filter, capturing pollutants, pesticides, and heavy metals before they are swept out to sea. Estuaries are also crucial in the fight against climate change, as they support abundant marsh plant and seagrass communities, which not only provide an effective buffer against storm surge, coastal flooding, and sea level rise, but are also remarkably efficient at sequestering atmospheric carbon. Alongside these important environmental functions, our state’s estuaries also provide open space for a variety of recreational activities. On any given day, countless Californians travel to their local estuaries to birdwatch, walk dogs, hike, swim, fish, paddle board, and kayak.

Despite growing recognition of their ecological importance and recreational value, California’s
estuaries need help. Two hundred years of agricultural and urban development, dredging, filling, water diversions, and land subsidence have resulted in a cumulative loss of over 90% of the state’s historical wetlands, while simultaneously degrading the health, function, and connectivity of the few systems that remain today. To make matters worse, coastal estuaries sit on the frontline of anticipated climate change impacts and are often trapped between rising sea levels and extensively developed and populated coastal cities. Fortunately, a broad network of government agencies, academic institutions, native nations, non-profit organizations, activists, and concerned citizens have risen to the challenge and are working to conserve, restore, and enhance estuaries throughout the state. The battle to preserve these unique coastal ecosystems in the face of the climate crisis is just beginning, but the future holds real opportunity for science-driven estuarine management to create enduring and positive changes along the California coast.

As the California Sea Grant state fellow in the Coastal Program at State Parks’ Natural Resources
Division, I have had the privilege to promote estuarine stewardship in partnership with one of the oldest and largest public trust resource management agencies in the state. The California State Parks system includes 128 coastal park units, spans over a quarter of the state’s coastline, and contains over 130 unique estuaries. Given the Department's mandate to protect these valuable natural resources, I was extremely excited to dive into my fellowship and do my part to help promote responsible estuarine management by furthering the State Parks Estuaries Initiative, an internal strategic planning effort to develop a comprehensive statewide approach for the management, restoration, and preservation of lagoons and estuaries in the State Parks system. 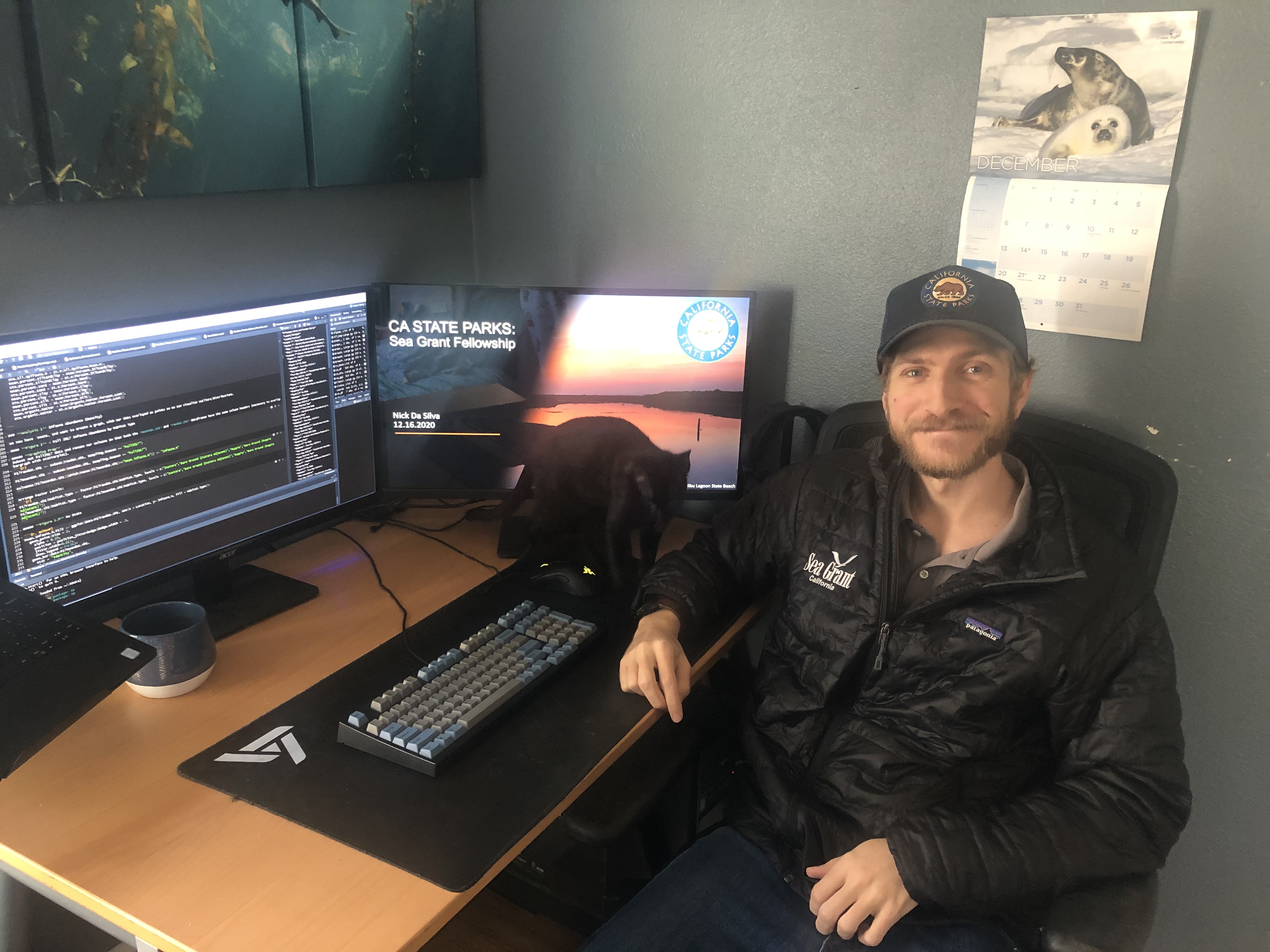 Working from home.Our team has aimed for a data-driven approach to management, and the COVID-associated slowdown of in-office work allowed us to reassess and modernize the current state of the Department’s internal data for our coastal lagoons, rivers, and estuaries. I have worked to compile and classify a spatially explicit inventory of 240+ coastal confluences (rivers, estuaries, harbors, bays, and more), and am now adding key datapoints for each system needed to inform natural resource management decision-making. Furthermore, as State Parks staff across the coast have adapted to remote work, we have been able to make the most of video conferencing to expand our outreach efforts to staff in the field. This has granted our small headquarters team increased access to the truly remarkable wealth of institutional knowledge held by the State Parks field staff who work in these coastal park units every day. As my fellowship comes to a close, I aim to memorialize this process by producing summary documents which review the state of the Department’s estuaries, and by hosting a workshop series which will help identify future directions for State Parks’ estuarine management goals. Alongside this targeted project, my tenure at State Parks has also allowed me to contribute to statewide estuarine management and policy by participating in a range of management and technical advisory committees, collaborations with NGOs and academic institutions, and partnerships with federal, state, and local agencies with shared estuarine conservation goals.

The California Sea Grant state fellowship has been a wonderful dive into real-world natural
resource management, and I look forward to the amazing work that future fellows will perform both at State Parks and through the many other participating host agencies. I am excited to continue developing State Parks’ estuaries program and am grateful for the time that the department’s field experts have so generously given to ensure that our team is working with the best available information as we plan for the restoration, conservation, and enhancement of estuaries across the California coast.