I was running on fumes, some combination of coffee buzz and adrenaline, when I took my seat at the opening session of a conference called “At What Point Managed Retreat? Resilience Building in the Coastal Zone.” I’d taken a red-eye from Sacramento to New York City to attend this three-day event and was excited, but exhausted.

What is “managed retreat”?

The topic of managed retreat consistently comes up in my work on state sea-level rise policy as a California Sea Grant State Fellow at the California Ocean Protection Council. It involves the planned movement of people and development away from coastal and low-lying areas that will be affected by the confluence of two climate change impacts: sea-level rise and increased storm intensity and frequency. Managed retreat is one of many adaptation strategies communities can employ and it has great potential to protect life, property, and coastal ecosystems people care about.

However, planning for and implementing this strategy requires intensive collaborative problem solving. Coastal communities will have to grapple with questions of land-use, legal precedents, policy gaps, social strains, economics, and other interconnected factors.

These factors cannot be untangled and addressed by climate science alone, that’s why Columbia University’s Earth Institute brought together people from a diverse set of backgrounds and disciplines to talk through the environmental, economic, cultural, legal, and social implications of managed retreat.

The beach and ocean are integral to the Californian identity, but the mesmerizing power that draws us closer also puts coastal development at risk to sea-level rise and storm-surge impacts. Photo credit: Christopher Woods

At the conference, the buzz of energy in the room and the impassioned opening remarks of the introductory panel cut through my fog of sleep deprivation and jet-lag. The speakers held nothing back and began by questioning the term “managed retreat.” Managed by whom? Retreat to where? For what goals? With what end results and for whom? They underscored not only the need for adaptation actions, but the need to do so in a just way, especially with support to front-line communities who have faced historical racism and inequity that placed (or pushed) people into harm’s way on the floodplains and low-lying areas of our coasts.

This panel teed up our work together for the remainder of the week. Concepts of social justice and community empowerment became touchstones to return to when speakers got in the weeds about economic trends and scientific measurements.

(left) I was one of over 300 attendees at Columbia University-Earth Institute’s conference on coastal resilience and managed retreat; (right) During a panel with indigenous perspectives at the managed retreat conference, a presentation shows land loss in Louisiana in red. Photo Credit: Sarah Fecht, Earth Institute

I took notes furiously over the next three days and collected a stack of business cards an inch thick. Many sessions at the sold-out conference were standing-room only or had to be live-streamed into overflow rooms. The hallways whirred with conversation, ideas flowing and experiences being shared.

From just one conference, we didn’t solve sea-level rise or balance all of the trade-offs of managed retreat. However, the attendees hit upon some key themes for future work and collaboration across disciplines. 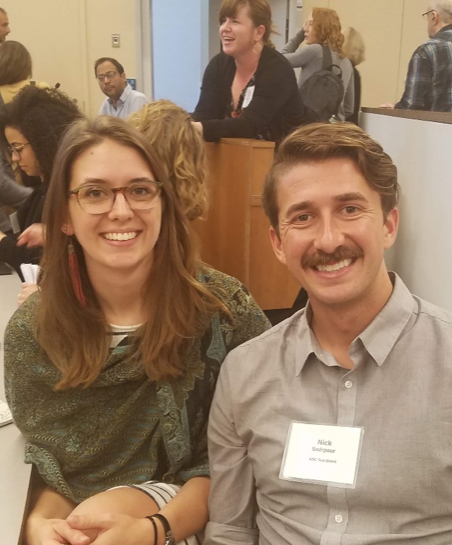 The conference was a great opportunity to connect with people from all over the country and world. I ran into other colleagues from California, including 2015 CA Sea Grant State Fellow and current USC Sea Grant Specialist, Nick Sadrapour.

It’s difficult to grapple with the big shifts that we, as a society, need to make in order to protect the people and things we love from climate impacts. But it was transformative to be surrounded by so many enthusiastic, clear-eyed, and open-hearted people working diligently on this problem. 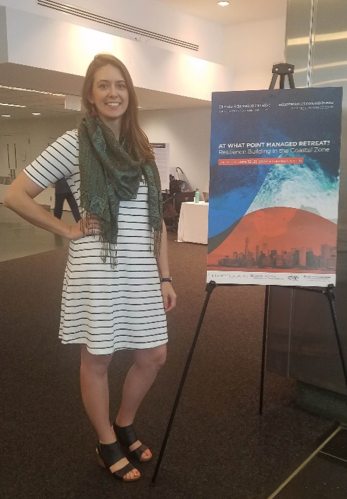